RSS Information on the next Gang Beasts Build and Steam Greenlight

Update on the next Gang Beasts Build and information on the Gang Beasts Greenlight status.

Posted by glumjamesbrown on Mar 1st, 2014

Thanks to the support, suggestions, and votes of IndieDB, Giant Bomb, Nerd3, YouTube, Steam, and other online communities Gang Beasts has made it to the top 5 games on Steam Greenlight!

If you want to help Gang Beasts get on the Steam please vote for it on the Gang Beasts Steam Greenlight page. 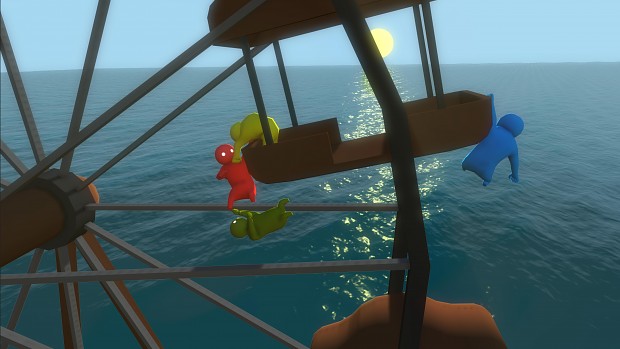 We have also set the list of changes we are making for the next Gang Beasts build (build 0.0.2), the key fixes in the next build will be:

the key additions to the build are:

We have made most of the fixes and changes but still have to add AI enemies to the sandbox stage, fix the knockout bug, and finish the Incinerator and Big wheel levels, if we don't have serious technical issues making these changes we plan to submit the 0.0.2 build to IndieDB on Friday the 7th of March.

Thank you for supporting and playing Gang Beasts.

There is no need to ask for Boneloaf's permission to record and share Gang Beasts gameplay videos on YouTube or other sites (this includes monetized YouTube videos).

thanyou so much for this awesome game and the work you are doing.I hope you keep the inspiration to make this one of the best games of the year .

1 question in the customitation ,what are going to be the themes of the warriors (ninjas,brawlers,vikings)?

We have multiple ideas for gang themes that are based on the environments they inhabit. You can see some early concept art in our image gallery: Indiedb.com

ahh i see so wheel could be inhabited by a gang called the the Ferris fighters? i wish i could enjoy this to the full extent but i lag to much on street and other lvls will there be a performance updates?

benwildten, we made some significant improvements to the character collisions since the last build, these will be in the next build which we expect to have it released by April 5 (you can read about the content of the build and see a video comparing the previous performance of character to the optimised character in the post at Indiedb.com).

There should also be a significant performance improvement when the Unity game engine that Gang Beasts is built with updates its PhysX implementation to PhysX 3.3.

halp gang beasts wont run correctly, there is no file to run becaused it states the file is damaged

Try re-downloading the file and extracting it using windows built in .zip tools (i.e. right click the file and select extract) instead of using programs such as WinRar.

Great update incoming. Just one thing: you should make the health bars toggle-able. Sometimes a true-man-brawl with infinte health is fun, expecially with 4 players.

TheGoomboss, we plan to add an option to disable health bars in a coming build.

Wow, great. You guys planned everything.

Could you check inside the "Gang Beasts_DATA" folder located next to "Gang Beasts.exe" for a file called "output_log.txt" and send me a message with the information contained inside please?

In the mean time, you could try updating DirectX and your graphics cards drivers.

how do I start the game

I have a few questions for this game and future updates.
The first being is that since health will be able to be disabled, will they be able to when they are first in the game or is that in a future patch?
And also will we be able to beat each other with bats and such?
And will the character customization allow us to choose the eyes like they are right now? (I like them like that)
Anyway really love this game and can't wait for the full release :D

Sir, I've noticed that that screenshot is from a Nerdcuded video, and that earned you a download and follower.

whoohooo version0.0.2 for my bday :D can't wait for the full game

i would love to see these things in the full game:
level creator,
character creator (maybe just simple props like hats and stuff and colors),
wireless xbox controller access because it doesn't work on my laptop :(,
different game modes, like capture the flag or something

cant wait this is the best game ever made!

Can there a way to modify textures? I think it would be hilarious to do that. Also a Level editor would make me extremely happy. Like for example crashing to cars together or something.

next build out yet

Ok, I'm frustrated now. Why isn't it released yet? I don't believe you've been trying for 10 hours

We made the first attempt to upload at approx, 3pm on 7th March and were not able to successfully upload to IndieDB until approx. 2am on 8th March (we are not sure when exactly after the submission it was approved by IndieDB); I estimate that we made 40+ submission attempts between three people over the 11 hour period. We posted numerous temporary links in the comments so that people could still download the game whilst the upload issues were fixed.

This game is just too good! It needs online and lan multiplayer functionality though! I sure hope that is planned!

Also, there can never be enough levels! Make one on a rollercoaster, and in a bar, and in a pool complex, and in a highrise, and on and on. Steam Workshop Support Please!

We don't have the resources to add support for online play in the free pre-alpha builds. We are taking professional advice re: add online play to the full game.

gang beast is sort of messed up for me on the sandbox when I am playing with friends when we all die it does not restart. please fix that and thank you four fixing the glitches.

The sandbox stage was a test map for the pre-alpha technology demonstrations and will be replaced / removed in the next build.

Is it possible to add more singleplayer versions of the maps? I would love to fight npc's in the ring and on other maps as well? I dont have any friends to play with :(

We plan to have AI enemies for all stages but we need to add AI behaviours for pushing, pulling, lifting, throwing, and jumping etc. before they can be competitive.

We don't have access to Xbox 360 licences or development kits currently but we will look at the logistics of developing a version of Gang Beasts for Xbox 360 if / when we can get access to the necessary tools / licences.

Hey there! I need some help,I double click "Gang Beasts.exe" but it won´t start,I have Windows XP.Please help :(

How do I play with AI in maps like the ring?

We have not added AI enemies to the "Ring" stage in the pre-alpha builds as we need to write an AI that can grab, lift, and throw before they can be competitive.