A ginormous thank you to everyone who has supported, promoted, and shared Gang Beasts on IndieDB, Steam Greenlight, Facebook, and Twitter.

We are now approximately 25% away from a place ranking in the top 100 games on Greenlight, If we can get enough votes to take Gang Beasts in to the top 50 games it is possible that we could be included in the next round of Greenlit games.

Please consider helping us by voting for Gang Beasts on Steam Greenlight if you have enjoyed playing the game or would like to see Gang Beasts on the Steam Store.

Thank you also to all of the people who have made positive comments about Gang Beasts on IndieDB, Steam, Facebook, Twitter, YouTube*, and Google+, and in the Giant Bomb, Penny Arcade, NeoGaf, and other gaming forums.

* There is no need to ask for Boneloaf's permission to record and share Gang Beasts gameplay videos on YouTube or other sites (this includes monetized YouTube videos). 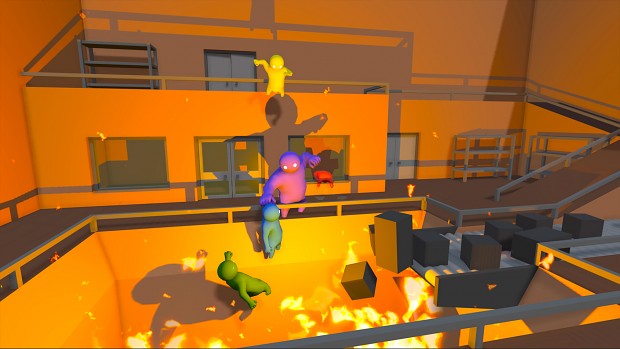 Gang Beasts has been downloaded 4,745 from IndieDB in the week since we made the first public pre-alpha available, the next build will be 0.0.2, for this build we have been prototyping additional levels (including the incinerator level shown in the video), testing other character body shapes, working on enemy AI, and fixing issues. A full list of information about the changes will be included with the download.

We will make a post announcing when we expect to release the next Gang Beasts build next week.

mechrojay, the style and simplicity of the gangs in films like the The Warriors, Escape from New York, and The Wanderers and the atmosphere of the Barry De Vorzon' "Theme from ‘The Warriors’" and "Baseball Furies Chase" tracks (from The Warriors) and John Carpenter's "Napolean Wilson" and "Walking Out" tracks (from Escape from New York) are key references for us, together with a host of other influences from Games, Television, and Film.

This is one of the most fun games I have played in a while. Never have I laughed so damn hard that I had to walk away from the computer. 4 of us were playing this in my room and we all ended up in tears of laughter.

I am excited to see this getting greenlit (you know it will happen!), so crossing fingers and toes, and have been getting the word out to friends about it too.

As for level suggestions...there are so many, but if I think of a feasible and sensible idea, I'll be sure to post my thoughts ;)

Keep up the great work guys, the gaming industry needs games like this :D

Otreum, Thank you for taking the time to write your comment and for helping to support Gang Beasts, it has been genuinely exciting and motivating to read every positive comment we have had re: the game.

We are now another 5% closer to a place in the top 100%; we have some podcasts and interviews lined up for the next 10 days, if they happen it could help us to keep the momentum.

We want Gang Beasts to be Greenlit in the next round, so we can get back to working on the game full-time and not have to work as hard promoting the Greenlight, if we can make it into the top 50%, before the next selection happens it is possible Gang Beasts could make that selection, if not we will continue promoting the game and try to get Greenlit in a subsequent round.

Just came here to say, keep this up! I brought it on my laptop to hang with some friends and we played this for HOURS! We played on two keyboards and a controller, and it worked great!

We were in tears of laughter by the end of it. Keep up the good work, this is the best local-multiplayer PC game I've ever played.

EDIT: Lastly, I wanna say that Gondola was the best preforming map on my ****** laptop. If you could make any other maps that were as low-preformance as Gondola, that would be great!

we'll continue to optimise the game, we made a significant improvement to character collision recently which has approximately halved the cost of each characters onscreen, this modification will be in the 0.0.3 build.

For the map Gondola, can you make it so hitting that lever actually makes the platform move up and down? And if you break it the platform shakes. That would be sooooo awesome and cool.

This game needs a knock-out timer, a grip timer, & a round timer.

we have implemented a basic version of the planned stamina system which is effectively a grip timer, this is what was referenced in the 0.0.1 pre-alpha read as 'no stamina system (for suspending grapples and limiting the success of punch spamming)'. we plan to have customisable round timers in the full game. We don't have plans to add a knock-out timer as the purpose of knocking out an opponent is to give you the time to remove them from the round, but we could add a referee for the ring stage to count pins.

BEST GAME EVER i almost peed myself because i was laughing so hard and i envey the victor because that really cracked me up and i would sugest this game for everyone LOVE THIS GAME!!!!!

OMFG can't wait its so funny