Information about the next Gang Beasts pre-alpha build (0.0.3).

The Gang Beasts 0.0.3 pre-alpha build can now be downloaded from the links below.

Since we posted the last pre-alpha build on IndieDB approximately 10 days ago, we have been working on a number of fixes and optimisations for the game and prototyping the Beef City subway system (that we plan to make the hub from which each stage and mode of the game is accessed).

We have made a lot of the planned modifications but still have several weeks of work to go to complete the changes we set out for the pre-alpha stage of the games development.

The key modifications in the next build are:

The key additions in the next build are:

We can't set a specific date for when we plan to make the 0.0.3 build available as we have a very busy end to the Month moving into the first Boneloaf office and promoting Gang Beasts at the three day EGX Rezzed event). We plan to make the last changes to the 0.0.3 build in the week following the Rezzed event and expect to submit the build to IndieDB on or before the 5th April. 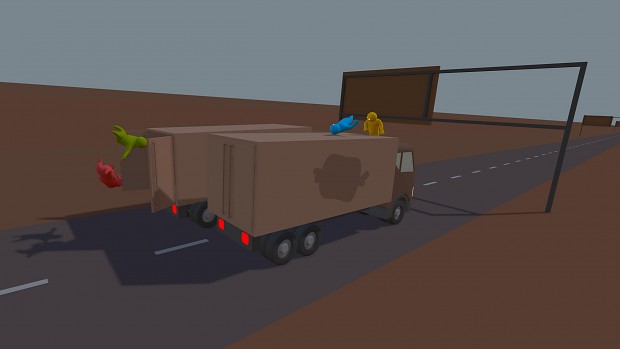 The 0.0.3 build ends the public pre-alpha stage of the Gang Beasts development and should be the first build to have working versions of each of the key game mechanics (punching, grabbing, pushing, pulling, throwing, ducking, jumping, health, and stamina).When the Gang Beasts 0.0.3 pre-alpha build has been released we plan to take the next 6 - 8 weeks to make the 0.1.0 alpha build of the game, the alpha build will have Steam compatibility and a number of new game modes, stages, character body shapes and sizes, and miscellaneous props to play and fight with (and Linux support).

If the transition from the 0.0.3 pre-alpha to the 0.1.0 alpha has no significant issues we plan to release the 0.1.0 alpha through Steam Early Access at a discounted price for the first week to fund the development of the full Gang Beasts game. 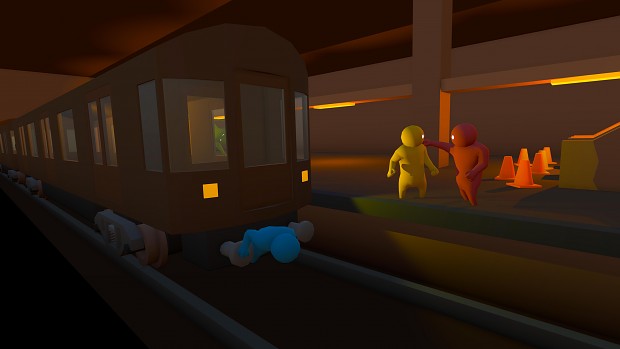 Thank you to the IndieDB, Steam, Giant Bomb, Nerd3, YouTube, Friend Zone, ‘Rock, Paper, Shotgun', Reddit, Cinelinx, Facebook, Twitter and other communities for playing and promoting Gang Beasts and helping us to promote Gang Beasts and get it Greenlit, we have had over 200,000 visitors to the IndieDB page and close to 100,000 downloads of the PC and Mac builds.

This game is incredible fun to play with friends. One of the best! It warrants wild screams of frustration and outrage while bringing players into a fantastic physical battle. Good work!

OH wow.. I just had to comment. You have something good here...

So far I imagine the game is going to emphasize on large scale combat? something along the lines of how "The Warriors" was... well that is what I'm hoping for since the warriors is my all time favourite PS2 game...

So much potential can happen with this game! I wish you luck!!! :D saving this page to favourites

This game should have a King Of The Hill option, like in the warriors :33

There will be many game modes including a 'King of the Hill' mode, Time trials, races, Death Matches, VIP, Tag, 'Capture the Flag, and other mini-games.

why can i play on my keyboard bro ..

Gang Beasts has supported mouse, keyboard, and game controllers since the 0.0.1 build (released on IndieDB on 17 February), there is information about this in the second paragraph of the main page. To map keyboard inputs press the "Tab" key in game or click the oscillating yellow "Press Tab to Remap Controls" text on the game menu.

If you are using the 0.0.3 Windows build and find that custom keyboard inputs are not accepted, quit the game, right-click the "Gang Beasts.exe" file and select the "Run as Administrator" command (to give the game permission to write to the input preferences).

thank you making the comments, we played and enjoyed The Warriors game and are influenced by the aesthetics, style, and absurdity of the film and numerous other 70's and 80's urban gang films or revenge thrillers. The story mode in Gang Beasts will be reductive similar to classic arcade fighting games (similar to Double Dragon, Bad Dudes Vs. DragonNinja, Golden Axe, Gauntlet etc.) i.e. laughing bad men mocking the protagonists etc. and have extended stages that link the smaller arena-like stages.

We plan to add a glut of different body shapes and sizes to play as in the full game (including sub-bosses, bosses, and end-bosses).

I think you should bring back the rotating camera in the trucks level. That's what I saw in the initial video that brought me to this game, and that level just isn't as good with a static camera. It's too hard to see what's going on.

Also, please consider releasing on IndieGameStand as well, they have a sweet store, and you can distribute Steam keys if you wish.

The current camera is temporary, we have a more versatile camera control system that uses trigger volumes to set the camera position based the hierarchy of character positions, but it requires us to manual places each volume.

Why dont you try Desura?

It was when we were looking for somewhere to make the public pre-alpha available that we contacted itch.io and IndieGameStand, we didn't want to make an unfinished game available through Desura.

So, when you guys finish the game you will make it avalible on Desura?

We will need to see what work is necessary to replicate the Steam features (that will be in full game) without the Steam APIs before making we can make a decision.

have you guys thought of puting it on steam early access

Yes, that is what we are planning.

I already had a lot of fun so far and really love your work, very innovative! Gonna get it on Steam as soon as I can.

Some small questions:
1) Will the art style mostly stay the same? (I actually yo hope so, like the simple graphics). Is there any artwork for the final game?
2) Is there any way now (or is it planned) that you can climb up a wall? Grabbing a wall and hanging there feels a little pointless otherwise.
3) Any moves planned for the feet? (independent turning from torso, kicks; don't mind if you keep it simple)

They are working on climbing, but I'm not sure if it will make it into the next version.

See this vine for a quick look: Vine.co

1. we plan to make the current unskinned characters available in the full game in some form i.e. unlockable etc. but plan to experiment with textures as gangs are a key part of the game (and the story mode) and we want to support players to form their own custom gangs with friends etc.

2. Please see the Vine link in Zlyer's comment (thank you Zlyer), we have the climbing partially implemented but it needs more work to balance the forces that act on the characters bodies to prevent then from behaving erratically or flying, we also need to make the legs contact the surface that is being climbed, and we need to modify the hand joints to stop the characters wrists from rotating freely (which can make them seem broken); we don't expect to have climbing finished before the next build we are adding a stamina system which prevents characters from grabbing endlessly.

3. We plan to have a floor kick for kicking stunned enemies from ledges, down holes, or under railings etc.

Thanks for the answers to both of you. Looking forward to the finished game <3

Thank you for your comments.

1. We don't expect the art style to change significantly in the full game

2. Climbing is planned (see Twitter.com for an example)

3. We are working on adding kicking, choking, elbowing, and could also add head-butting

Mad8872, there will be numerous body shapes and sizes for you to play as in the full game (the current players are not the smallest or largest characters you will be able to play as), larger characters will be able to lift and throw heavier weights, but will move and punch more slowly.

orh man the climbing looks really awesome and funny. also the scene is pretty well done, with the trucks and the physics of the trucks. cool.

We're a small independent company making our first game, so the free-to-play model isn't an option as it would require us to work without an income for the whole of the game's development, which isn't sustainable as we have software licences, equipment, office, and subsistence costs to pay. We have not set a price for the game, we plan to take advice on pricing from the distribution platforms we put the game on.

im a gamer i play all kinds of games but indie just never got into them but this OMG i might just get my self into them ;D

I think, as soon as possible, you should add some sort of team function for players. I've tried playing the Street level with friends but it is nearly impossible since we just end up punching each other along with the AI. Friendly damage should be an option though, because it makes the giant mob fights more dangerous. Also, I think there should be some changes made to the throwing system because the fact that you turn around when you're holding someone makes tossing them off edges or out of rings extremely difficult to do unless you picked them up right by the edge.

1v1, 1v2, 1v3, 2v2 matches are planned, but we don't currently plan to disable hitting friends in the co-op stages, this could change if sufficient people find it difficult to avoid punching their friends.

We don't expect to change the throwing mechanic other that a minor increase in the lifting forces as we have seen and played against many players that have become skilled with the current throwing mechanic.

A private LAN I'm going to will be having a 1v1 Gang Beasts tournament (Suggested by me). It's going to be awesome! Will be just after the next version release (If on time). I can't wait.

Why's there no light when I start a round?

We have seen this issue on lower-specification computers with integrated graphics, we think it is caused by the graphics processor lacking support for Shader Model 3.0 (which we use for real-time shadows etc.), lowering the graphics settings for the game could bypass the limitation.

Can you add a multiplayer online? With hamachi or evrything like that? it will be famous ^^

We are working to add LAN and options for online play but this will take some time to implement successfully.

I was wondering if you saw it as a problem that it is very difficult to face the correct direction when attempting to throw someone off of something. I often find myself backing myself off of edges trying to toss limp players.

We have significantly improved the turning circle in the next build.

Just a suggestion, but you guys should impliment a custom characters option where you can change clothing hair styles etc for all four colors blue red yellow and green. It will be fun to make custom wrestlers and fight in the ring or make the guys indiana jones characters and fight on the trucks. Just a simple request :p

NODE just supported this game so much!

The blue guys are so fkin perverted xD
Awesome game looks great! And yeah, the warriors was a pretty awesome game, I remember playing coop and vs king of the hill with my brother 24/7, epic game!