Galactose is a space combat/tactical RTS hybrid, which pits hundreds of ships against each other in the age-old war between dinner and dessert. Your sweet, delicious homeland needs YOU to defend it against the evils of dinner. Will you heed its call? Galactose is a fast-paced space combat which melds fast paced space combat with tactical RTS strategy. In this game, you control various types of dessert drones - cupcakes fighters, pie bombers and ice cream scramblers, along with Ice Cream Sundae Guided Missile Cruisers and Birthday Cake Carriers as you fight against the evils of dinner. Galactose is currently a Work in Progress. 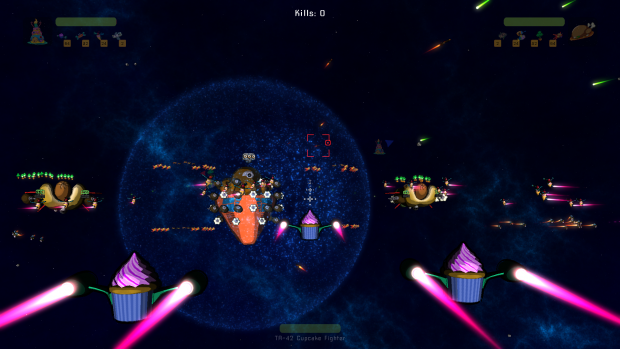 The player in control of a cupcake at the start of a massive battle. Both sides have warped in and are flying into range of each other.