Freaky Green Sunshine is a Sidescrolling action, puzzle -platformer by GrimArch Studios running on UDK. The game takes the player through an exciting, humorous story and adventure as you take the role of Jonas, a burger-loving, just chillin', super-ego on his journey to stop the corporate giant Abbage Foundation. 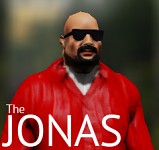 After waking up from a helicopter crashing into his living room, Jonas has one thought on his mind "They will have to pay for this". However he soon realizes there is more to the picture than he thought and the brainwashed soldiers marching the streets may have something to do with the Freaky Green Sunshine., shining down from the "green eye" in the sky, a green planet which has been orbiting earth for the last two months.

The story in the game is told through voiced characters and cutscenes. Through character interactions, Jonas interacting with the environment and clues in the environments themselves (sort of like in half-life). The script contains over 25 min of lines for the main character and there are over 20 different characters you will meet through-out. Some minor and some taking a bigger place in the story.

"Don't use the foundation! They put something in it in order to use you, to brainwash you and control your every move! ...I have to say I regret this, but I used their foundation this morning. That can't be good."

Freaky green sunshine features a whole range of bosses that you will encounter through-out the game. The bosses work like in traditional games where you take a break from the normal action and puzzles to fight the boss. The boss battle is not only about shooting-to-kill but has more puzzle elements to it. Each boss has its own unique way of beating. An example is the "Killer Bus", one of the "mini"-bosses. A maniac bus trying to kill you.

The game takes place over three full days and nights and all levels are connected (in some way), which means you will be going through night and day through indoor and outdoor environments as well as different weather. You start in the forest and make way into the city and then beyond...

Hello
It has been almost a year since the first gameplay video of freaky green sunshine and progress has been good. The old gameplay videos are really starting to get outdated so it is time for a new gameplay video. This time with updated visuals, gameplay mechanics and features. One example being the leveling system now in place in the game complete with upgrades to the character and weapons.

So without further ado, here is the gameplay montage trailer from freaky green sunshine:

That's it for today!

Freaky Green Sunshine has made it to Steam Greenlight!

How will the story in freaky green sunshine play out? Take a look inside.

The fourth gameplay video from freaky green sunshine is live and it's the longest yet. Showing grenades in action.

This time we take a brief look at some of the bosses.

Not only funny as hell but beautiful as well. I'm tracking!

I'm liking this. Keep up the good work man!