New update 0.52 of the PC version is finally live on Steam! Many bug fixes and improvements, level changes, and many new Steam key sent to new players!

Hi there, Fractal Space players! New update 0.52 of the PC version is finally live on Steam! This update includes many changes, improvements and bugfixes!

This update contains many bugfixes and changes to make the game more stable, and fix various gameplay bugs & additions, and save system reworks.

IMPORTANT: These changes imply that a full RESET SAVE is required for the game to function properly. We strongly recommend you press the !Reset Save! button in the main menu after the update!

Chapter 1 had many old dialogues coming from the Pocket Edition, and most of the new PC-exclusive dialogues were simply not present.

We have added the missing dialogues in Chapter 1 for PC; they are silent – and this is not a bug.

As we are reworking them all in the game, please ignore the fact that the audio is not yet recorded, and read subtitles meanwhile.

Please note that new dialogues are not yet localized, and they should not yet be translated as they are liable to still change. Some lines are the same as on mobile – good chance these will change as well in the future. They will only be added to the Localization Sheet when they are considered to be final.

In addition to Chapter 1 dialogues, there are also many new dialogue events. Here are a few examples:

Speedrun Mode now disables many dialogues in Chapter 1 (around 60% are disabled) to prevent having too much talking during Speedrun sessions. If you want to test the new dialogues (silent, only subtitles for now), please play without Speedrun Mode first. This will be applied to all Chapters in the future.

Many changes were made to various areas in most levels – sometimes these are small changes and fixes, and a few larger ones:

The End Game was one of the main game systems that was not yet functional – and it is now! There might be bugs with this, but the main logic is implemented.

The End Game system is activated when the player has found all Upgrade Terminals in the game, and none are available to use:

A new Upgrade has been added to the game!

This upgrade helps finding Recordings, Upgrades Terminals and Color Packs. It has 2 levels of upgrade:

The Chapters page has been reworked to be more suitable to PC and gamepads. Each Chapter now has a specific image and loading image.

It now also displays new stats for each Chapter: 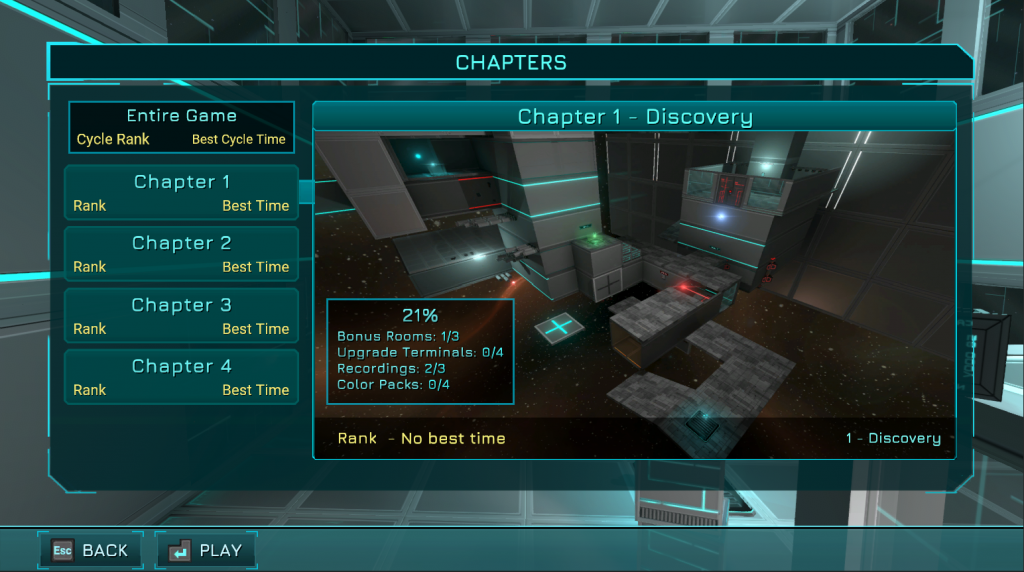 This update introduces new statistics available in the Pause Menu. Later on, we’ll rework the interface display to be easier to read, but for now it’s important to check it regularly to see if it displays accurate information at all times: 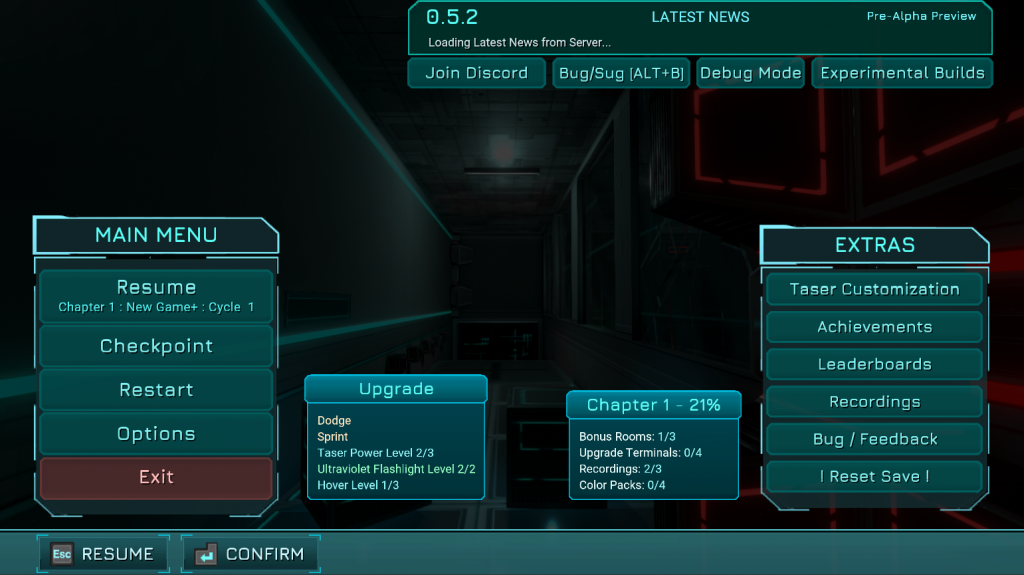 IMPORTANT: It’s intended that Chapter Stats (right side) are NOT DISPLAYED on the first run of the game. Upgrade stats are displayed after acquiring your first Upgrades.

Changes and fixes were made to various upgrades. 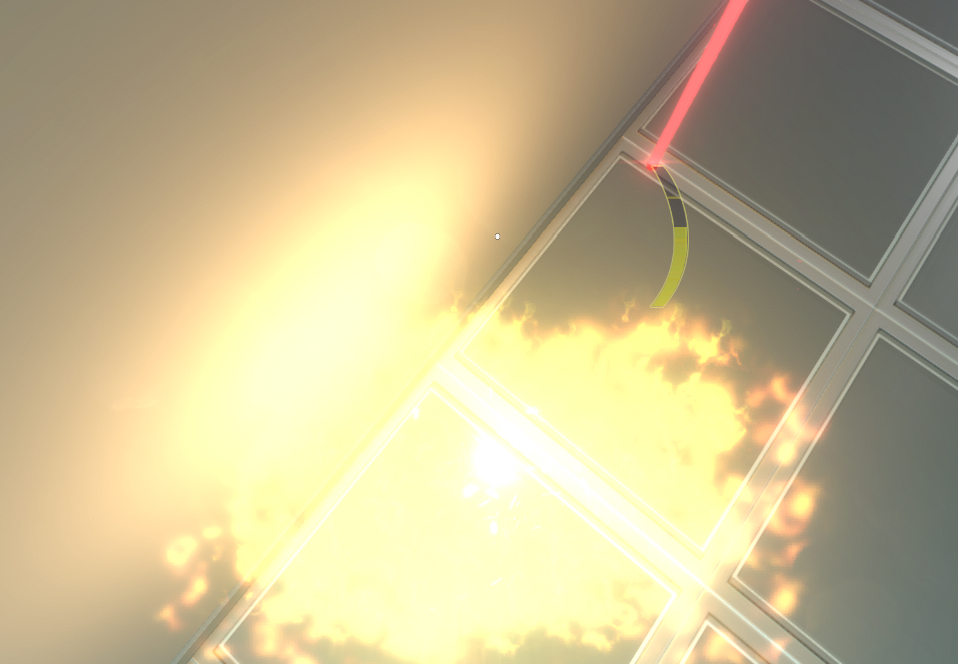 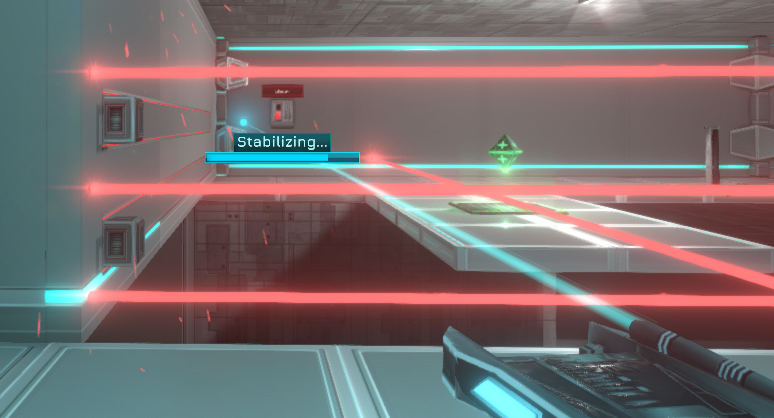 Many improvements were made to the Aim Stabilizer upgrade mechanic:

Many bugfixes and improvements were made to Sprint and Crouch mechanics for this update:

If you have played Chapter 4 on PC, the word “Progress” might ring a bell

Chapter 5 is a lot of work, just like Chapter 4 on PC was. We’re gradually getting there, though. We’re getting more rooms functional. There’s a few new features that were added for this Chapter, and creating rooms, puzzles and traps that use them takes time.

We’re hoping to have a first playable of Chapter 5 in Experimental Builds in April. Thank you for your patience!

We have started to rework the Taser-Gun exclusive for the PC version. It will have the following major improvements over the current (mobile) version:

The new Taser system requires a lot of work as well, in parallel of Chapter 5. The first playable version is planned to be tested at the same time as Chapter 5 PC. If it’s ready before CH5, it will be set live before

Here’s a list of the many other various bugfixes of this update – many more have been fixed, only listing the major ones here:

The Pocket Edition has been updated a lot on both Android & iOS recently, with many bug fixes and adding new FRACTALXMAS and FRACTALOWEEN events, that can now be played anytime!

In addition, a HINTS system and various improvements were made to the game to help the many players who remained stuck in the main puzzles in the game. New Controls options were added.

More details on the dedicated page for latest changes on the Pocket Edition.

Thank you for reading, and see you next time!