Fractal Reality is a first person game in which you live in a city which is organically connected to itself. It's connection forms a physical and spiritual puzzle which blend together to allow the Player to make moral choices in how they go about solving it. Actions the Player does will elicit certain reactions from people, plants, animals, and the city itself. The Player must figure out the system
and interact with the city in a moral way that they deem fit to progress the game. Being helpful will allow them safe passage through the game but will take longer. Being harmful means the Player does
unsafe and risky things at the reward of progressing the game faster. Depending on if the Player is helpful or harmful to their surroundings, the game will change around them and ultimately lead them down a different story path.


The Player is able to take a substance which allows them to see the inter-workings of the city and what is truly going on beneath it's skin. This will allow the Player to navigate to the reactions of
their choice in order to progress the game more swiftly. This also allows them to see the important points for the physical puzzles in the city which must be solved in order to progress the game. The
Player must balance using this substance to help them with the city's puzzle and maintaining a normal balanced life by doing jobs and making money. This will allow them to support the life they live
while delving deep into the inter-workings of an important spiritual societal secret.

Currently being developed by me, Mac Hart. I'll be doing most, if not all of the designing/art/programming. Animations and generic character models will be done by others at a later point. All graphical elements are placeholders; only the designing/programming is being flushed out right now.

Development started on March 10, 2012. Major condensing and redesign which created what the game truly is started on February

Fractal Reality has released the second version of it's game design document to the public! Learn about what the game strives to achieve and an overview of the core aspects of it's gameplay. More gameplay details, characters, and the story will be flushed out in later versions.

Take a look and tell me what you think. It's extremely helpful to know whether things are unclear or don't make sense. It's also helpful to know whether this document does make sense of the game so that I know I'm on the right track. The document is currently a robust 25 pages but a lot of the information at the end in the gameplay details is just a skeleton for later versions. The meat of the current version is in the beginning half. Even if you only read a little bit of the overview or just give it a quick scan, I would still love to know what you think. Enjoy! 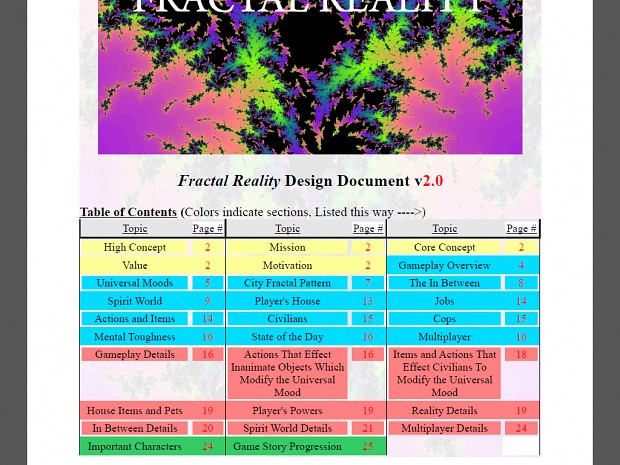 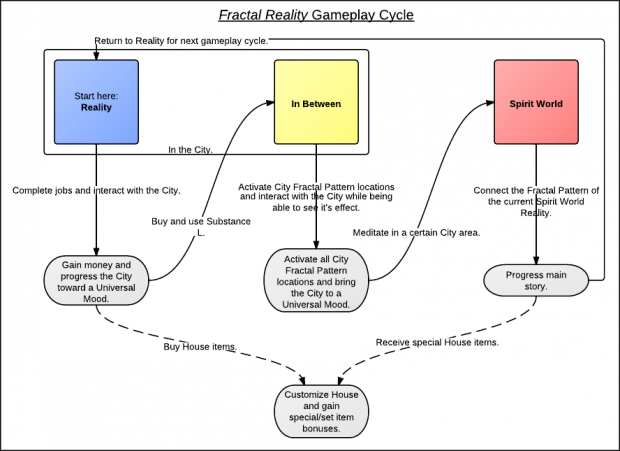 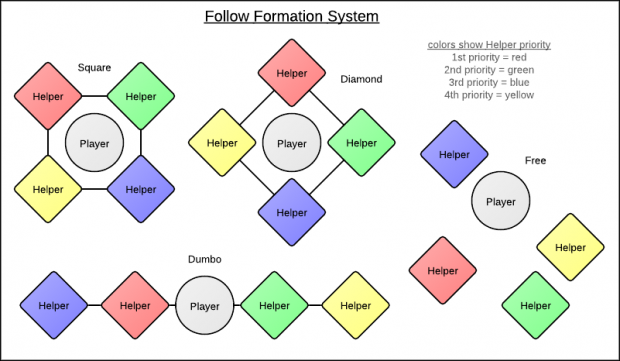 The pictures above show the Table of Contents and the three diagrams found in the design document which illustrate core aspects of the gameplay. In later versions I will focus on adding more information to the gameplay details and describe what will be possible in multiplayer. I will also add more diagrams to better illustrate the core mechanics I have described in this version of the design document.

Here is an excerpt from the design document to show the types of things that are discussed:

FractalRealityDesignDocument wrote: Using conversation to get to a certain Universal Mood is the easiest to do but usually the slowest way. An option to progress toward Fright non-conversationally would be to buy fireworks and shoot them at Civilians in the City. This would bring the City's Universal Mood closer to Fright at a staggering rate. Effective options like this have trade-offs in that the Player must spend a lot of Money to buy the fireworks. Also if any Cops were to witness them do this, they could be chased down and arrested which would reset all Universal Moods back to zero(and cost the Player some Money). This means the Player would have to start over with progressing toward a Universal Mood.

Tell me what you think, spread the word, and watch Fractal Reality! It's going to be crazy, I promise!

An early prototype demo of the Spirit World gameplay in my game. Shows the "Running Man" game mechanics in action.

Ask me if you want this wallpaper for a specific resolution size made.

This is your life Virtual Life