CHARLOTTETOWN,
Canada - July 15, 2010 -
Snow
Day Games, a new game development studio based in Charlottetown,
Prince Edward Island, Canada, today announced that its original title
for iPhone and iPod Touch, Fly
vs. Car,
is now available. Snow Day Games has partnered with international
charity "Child's Play" to put games and toys in the hands of sick
children all over the world by sharing 50% of the profit from sales
of the game to charity.


"Fly
vs. Car
is a fun, casual game for players of all ages and that fits with our
goal of making a game that can do good in the world for children,"
said Matthew White, chief creative officer of Snow Day Games. "As
players dodge traffic in homage to Frogger and other great games
where you avoid getting flattened, they can also know that their
gaming is helping others."

About
Fly vs. Car
In
Fly
vs. Car,
players avoid oncoming traffic for as long as possible by moving
their fly from side to side. It's a challenging and fun, fast paced
game where the faster your reflexes, the higher your score. Fly
vs. Car
features OpenFeint, Facebook, and Twitter integration, so high scores
can be shared and players can compete against their friends on the
leaderboards.

Thanks for voting and helping Fly vs. Car on it's quest to become the 2021 Indie of the Year. You are now in with a chance to score some free games. Help this game secure more votes by embedding the widget (or link) we have included below on your favorite sites.

To promote Fly vs. Car and grow its popularity (top games), use the embed code provided on your homepage, blog, forums and elsewhere you desire. Or try our widget.

Falling Rocks makes it hard to get some ore but your robot have to survive. Use dynamite to blow your way through rock and built deep shafts to travel...

Waa Cha! is an arcade game based on Asian Kung Fu. Your goal is to assist Master Wu Shou to train his 3 most gifted students to regain their mighty Kung...

Sheep. With Homing Mines. Minesheeper is a multiplayer arcade game set in a Dieselpunk universe, that blends tactics with absolute mayhem. Up to 8 players...

You got the tea? If not then you should get it. In a bizarre world of TUTUTUTU - tea party God forbade any tea and to remind people about this prohibition...

Under Heroes is a retro style 2D arcade game with easy and simple control. ◆ Explore the world and build landmarks! ◆ Super easy to learn and play... 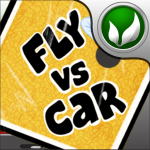