See the first trailer and check out the Greenlight page! Not only that, but there's a new ship and more UI updates to see.

Fleet is coming along nicely. The past couple of months have been centered around getting rid of the last vestiges of the old UI, and improving the new one. I've also started streaming development on Twitch, and started the Steam Greenlight process. Oh, and there's a new ship as well!

Green screen
I'm making the big push for Greenlight, starting this week. So here's the official first trailer! I recorded the footage in 720p60 so select that as the playback quality if your connection is good.

If you like what you see, please head over to our Greenlight page and cast a vote for us!

We've got a button for that
The UI has been expanded in lots of ways - you can toggle individual turrets by type, allowing you to conserve ammo or switch tactics on groups of ships. Health bars for ships and turrets are much clearer, and in general the look is very clean and simple, allowing for easy identification of the information you need.

Is that an Ocelot?
No, but it's an Ocelot-class frigate, designed for recon missions. It can also fit medium weapons, although you'll have to choose your modules carefully to ensure there's enough reactor power to fire them. 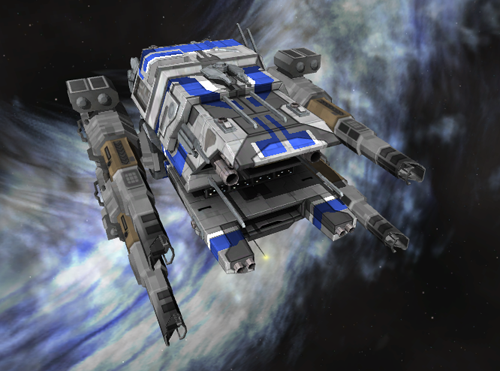 Stay tuned
You can drop by my Twitch channel to see the game being developed. The streaming schedule is in one of the panels below the stream. We usually end up talking about games, coding and Unity as well as Fleet. And if I'm stuck, you get to watch me frown. At weekends, the Saturday Hat may make an appearance as well.

That's all for this update - see you next time, spacers! And don't forget to vote for us!