Farmageddon is a 3D match-making puzzle game for Windows 8 & Android. Your farm is being destroyed by a tornado, and your farm animals are all caught in the vortex! You must match animals by species in order to save them before time runs out.

As with many match games, players must match similar objects by dragging their finger on the screen. Where Farmageddon shakes things up is that rather than matching 2D jewels or pieces of candy, you are matching 3D farm animals. To spice things up a bit, you also rotate around the gameplay area (the tornado) as the timer ticks down. You'll get new farm animals to match and save from the vortex each time the camera moves, but you'll also lose them! Save as many of your farm animals as you can before time runs out. Our online leaderboard will allow you track how your scores match up against every one else's, and with our cross-platform system, you can log in to your account via any supported Android or Windows 8 device. Play Farmageddon on your Windows 8 tablet from home, and your Android phone while on the go, keeping the same stats and hiscores across the devices automatically!

When I first started Farmageddon, it's purpose was more get-a-game-done-for-a-change motivation than anything else. At start, I'd given myself a month to throw together a quick game. After that month, I realized that I had a game with quite a bit of potential, so I decided to push the release back a month to spit-shine things. Well, now that date is quickly approaching, and I am not ashamed to say that Farmageddon's release date is pushed back one more time. I am absolutely confident that this will be the release date for the game, as I've given myself enough time to do what I need to do 10 times over. That math may seem extreme, but it comes with my experience over the last two months... call it the solo-indie-developer factor.

There are a lot of things I did not take into consideration when first starting this game; in my defense, this started off as a hobby that would end up in app stores. I now realize that I've got a fun game that provides both a challenge and endless replay potential that is completely family friendly, which means my target audience is anyone and everyone with a mobile phone or tablet (if/when I decide to add iOS to the mix anyway). I've since come to the realization that this game deservers more than a spit-polish, and so with the majority of programming out of the way, I will proceed with Alpha and Beta testing phases while reworking all game assets for the final release.
Farmageddon is challenging. It's fast-paced, but not aggressively so. The gameplay is incredibly smooth. Most important to me, the game masks your opponent with the use of a timer and game pieces... but I can tell you from experience that it's you vs. you all the way. Watching the combo timer fall with your peripheral vision as your eyes dart across the screen to find any collection of three animals in a row means that you're attempting to do two things at once, which never works out. The trick is to ignore the combo timer, but as Morpheus said, there is a difference between knowing the path and walking the path, and this is no exception. In other words, it is not as easy as it sounds.

The leaderboards will provide you with a never-ending goal to reach. Chances are you will never be the best, but in my humble opinion, what makes a casual game fun is that while attempting to achieve an ever-escaping goal on the horizon, you have a lot of fun. Add personal achievements to the list, and you've just described any casual game that has ever kept my attention. And for me, that's what being an Indie developer is all about. It's not a means to an end; it's not a career move in a blind attempt to get my 15 minutes of fame; it's about creating games that I want to play in the hopes that there is a group of like-minded gamers who will enjoy what I've created as much as I do. 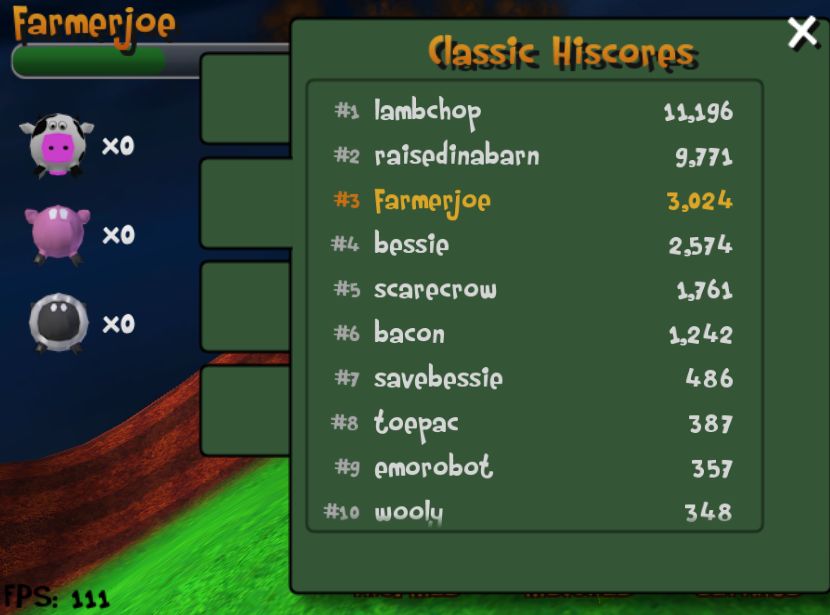 I've spent a lot of time since the last post on finishing the leaderboards and stats system for Farmageddon. Anyone who is registered with the game will have their stats automatically saved, as well as their scores posted and ranked in the leaderboards. The system also keeps track of some personal bests like chain length and combos. This data will all be synced across all devices with no effort from the end-user. For example, I can play a quick game on my Windows 8 tablet before leaving the house, and then login via my Android phone and continue playing on the go... all my stats from either device are synched automatically, so my hiscores on both are always the same.

After finishing the leaderboards system, I realized that the ability to move to an Open-Alpha release was getting closer and closer. It was time to take a step back and remind myself of what I set out to accomplish back on Jan. 7th. The goal was to take the 2D match-making game type and convert it to 3D. Looking at Farmageddon, I decided that the game needed to emphasize the 3D a lot more. There were two ways I was going to accomplish this:

1) Better game assets. The barn, while 3D and barn-shaped, lacked character. The animals had potential, but lacked charisma and personality. This needed to be remedied.

2) Cameras & Animation. The positioning of the cameras up to this point emphasized trying to make a 3D game look 2D. It now seems ridiculous to me that I was trying to do this, but I had tunnel vision. All I would need is some good camera tricks and some relatively simple animations to make it blatantly obvious that this was not your normal 2D matchmaking game.

I've made progress on both items 1 & 2, but this post will focus on #1 and save #2 for another day. Starting with the barn, I made up my mind that I was going to learn texture painting in Blender3D, no excuses. The barn was the first asset I'd ever created from start to finish in Blender, so it seemed like a good starting point. My UV's were already layed out (haphazardly) and I had successfully colored the sections of the barn the appropriate colors, but had always lost my way when trying to apply a texture. I had resorted to the fact that all my texturing was going to have to be done in an image editor, and 2D graphics have always been my Achilles heel.

After rushing through a quick tutorial, I figured I had enough knowledge on the subject of texture painting to be dangerous. It took a lot of bouncing back and forth between Blender3D and Google queries, but eventually the barn had gone from this: 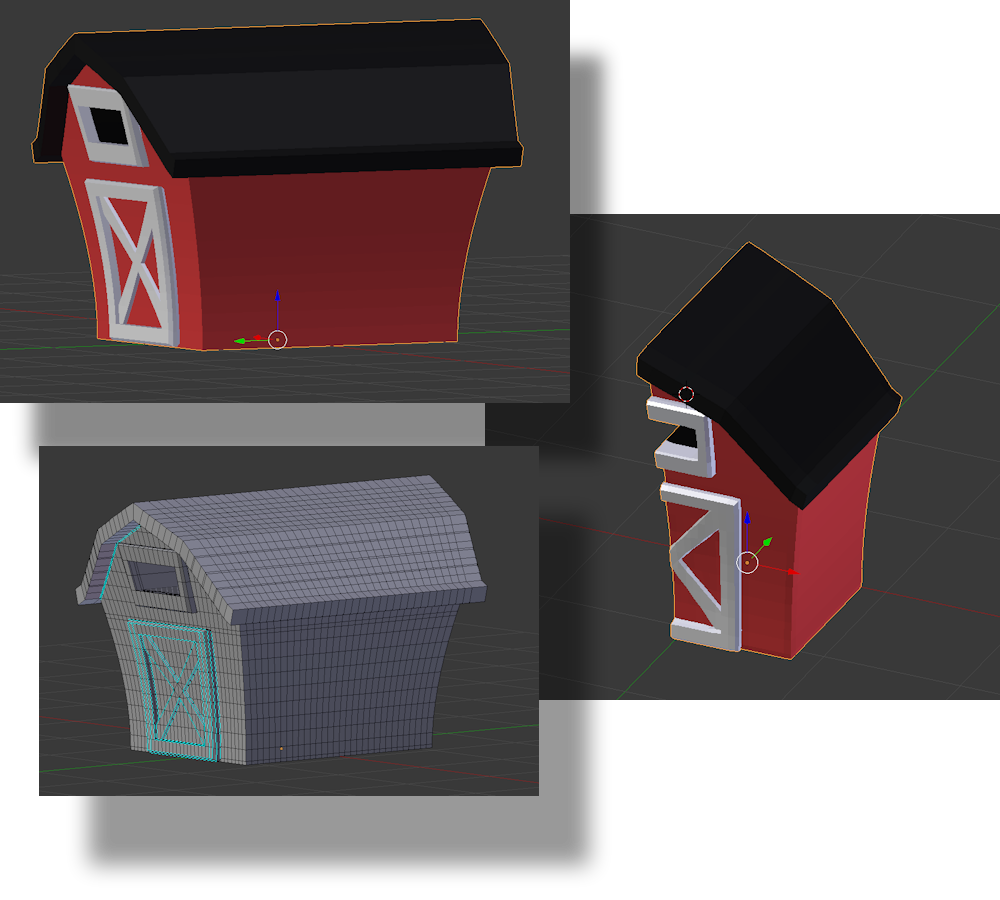 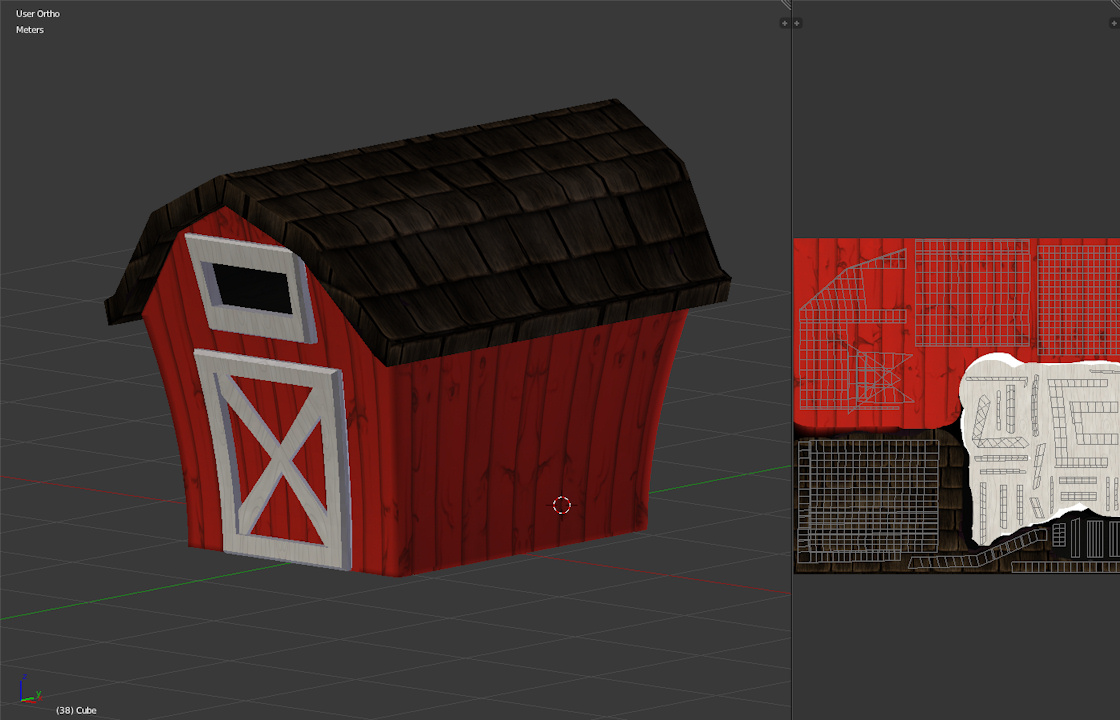 The results were far beyond my expections, and although my UV Map looks incredibly unprofessional, the model is going to work perfectly for the game. After moving the new barn into the game, I realized that it needed a little work to really fit the scene. A few more tweaks yielded this, which at least for now, is the final version of the barn game asset: 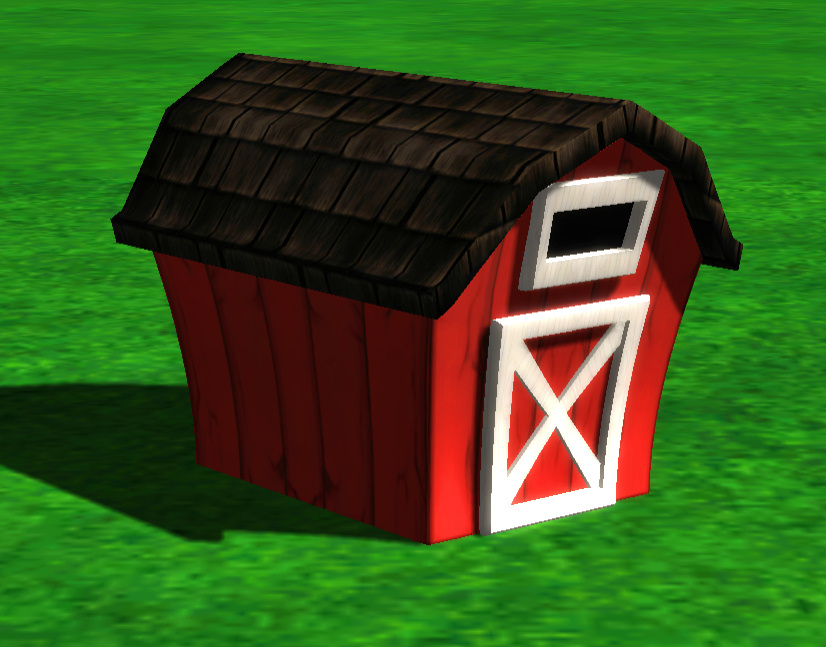 I moved on to the animal pens, and after a lot of work rearranging my UV maps, this is the final result: 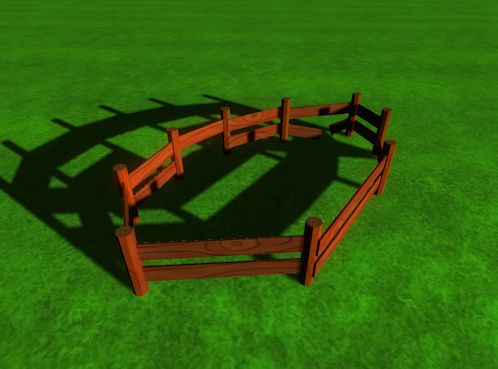 I'm anxious to rework the farm animals with my new knowledge, but for now the game programming needs to be completed. The current assets will work for as long as needed, and I will need to wrap up work on my admin system before getting too far ahead of myself.

In closing, Farmageddon's release date may be pushed back, but it's for a good reason. The plan is to get a Webplayer version up for Alpha testing on the website next weekend. Alpha testing will be for working out any major bugs that players experience, and hashing out other minor details that aren't finished. Beta will be the release of both the Arcade and the Zen game types, and debugging those before final release. This stage will also be used to implement the trophies/achievements system and the Paypal checkout system. This will leave me with plenty of time to work on game assets in the background, and prep everything for the new release date.

There are two things that I can saw with almost absolute certainty after two months of working on Farmageddon:

1. I love making games, and Unity3D has provided me with an opportunity to do what I have dreamt of doing since the day my child-like ignorance was replaced with the realization that people make video games, and I am as much a part of people as anyone else. I will be making games for a long time to come, whether it provides income or not.

2. Farmageddon will now be released on National Hamburger Day, or May 28, 2014. The advertising for Savebessie.com almost writes itself...

The biggest update to Farmageddon this past week has been a complete overhaul of the website. No longer simply a re-posting of the dev blog in a plain...

This last week has brought about some big updates for Farmageddon. I've put a lot of time into setting up the environment to give the player a more immersive...

After finding some more time to get some work done on Farmageddon, I've added the sheep farm animal game asset as well as some effects to make the environment...

I'm about 3 weeks into developing Farmageddon for Droid & Windows 8. Check out the work done on the game so far, and how Farmageddon went from an idea...