You are a young adventurer that is to embark on a life changing journey that will test your skills and wit, in this post-apocalyptic/post-war world that can only be described as a nightmare, abused by science and technology it has taken a step back in eras from almost futuristic to medieval like.

Thanks for voting and helping Fall Of Eden on it's quest to become the 2022 Indie of the Year. You are now in with a chance to score some free games. Help this game secure more votes by embedding the widget (or link) we have included below on your favorite sites.

Lair of the Madhat

Okay, First off let me give you a little background information about Fall Of Eden, Think of this kinda like the worm on my hook, you know get you enticed and interested in what I actually have for you guys...

Fall Of Eden is an experience, Where you take the role of a young man named Timothy Bax, He lives in a small and quiet community on an island called The Haven just off the mainland of Eden. Way before his time some 100 years ago there was an advance in technology that enabled the genetic enhancement/engineering of the human DNA, Genetic engineering became huge problem fast as like anything if there is money to made from it there is usually some form of organised crime controlling the illegal distribution of it. This led to people Abusing their genetic powers and in turn causing a civil war, By now other countries had already gained the used of the genetic enhancements and started making weapons, This caused great conflict between some countries and ultimately resulting in War, In fear of soldiers abusing their powers scientists came up with a super weapon designed to wipe out civilisations, With the use of genetic engineering they created the War Beasts A Number of savage animals genetically enhanced for war. During the war most people were killed the only ones to survive were the ones with these powers and a handful who had managed to hide away for many years until the War Beasts became dormant and then rebuild communities like The Haven. Now your journey begins, The day young Tim decides to leave The Haven toward the Mainland of Eden. This will be a true test of Wit, Might and Skill as you will be faced with many enemies and environments from the dense woodland of Eden's countryside to the overgrown concrete jungle of Hewlett.

Right now all that is out of the way...

This was really hard for me add as unity does enable shadows but only in the pro-version and as a Indie Developer I have a ZERO budget until I start my crowd-funding campaign. So I sat down and took all my options into consideration and after a good few hard days work I managed to come up with my own 'work around' effectively 'faking' real-time shadows by using almost the same algorithm that I would use for normal shadows but adapt that to use 2D sprites as the shadows and make them work as shadows. 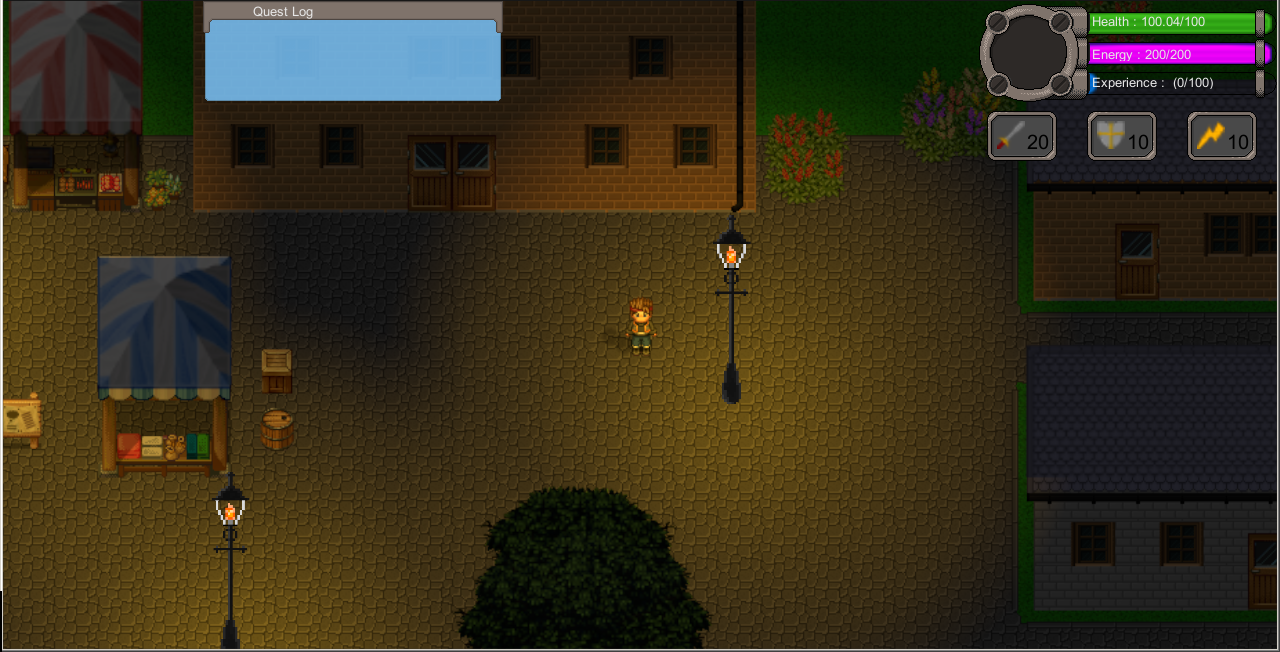 It dawned upon me that I had not yet taken into consideration the GUI, So I spent numerous hours planning and designing the GUI until I came up with something that I think works perfectly, Then I took the time to create all the elements in one full swoop, Resulting in a pretty damn sweet front-end for Fall Of Eden. 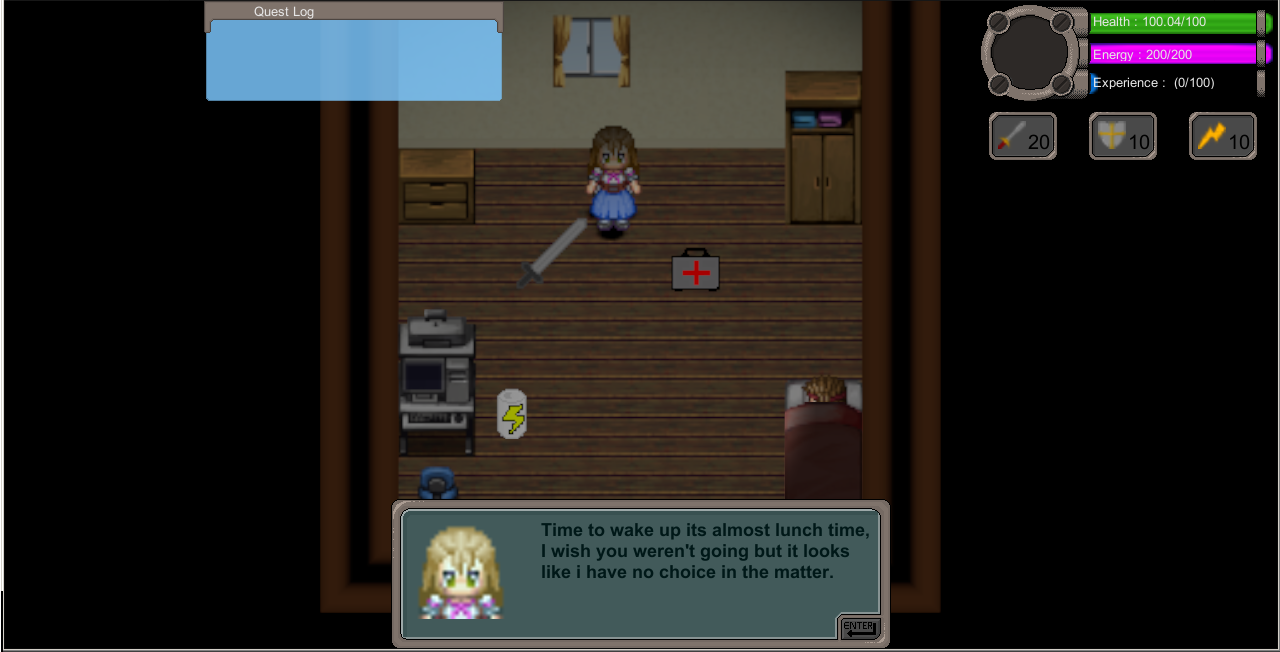 I had a number of people tell me the Inventory system was too long winded and hard to use in a hurry during combat, So I took that and planned out a system that flows around the player and is easy to use taking a mere two clicks to do whatever you need weather it is using a health pack or you want to equip a different weapon... *Simples* 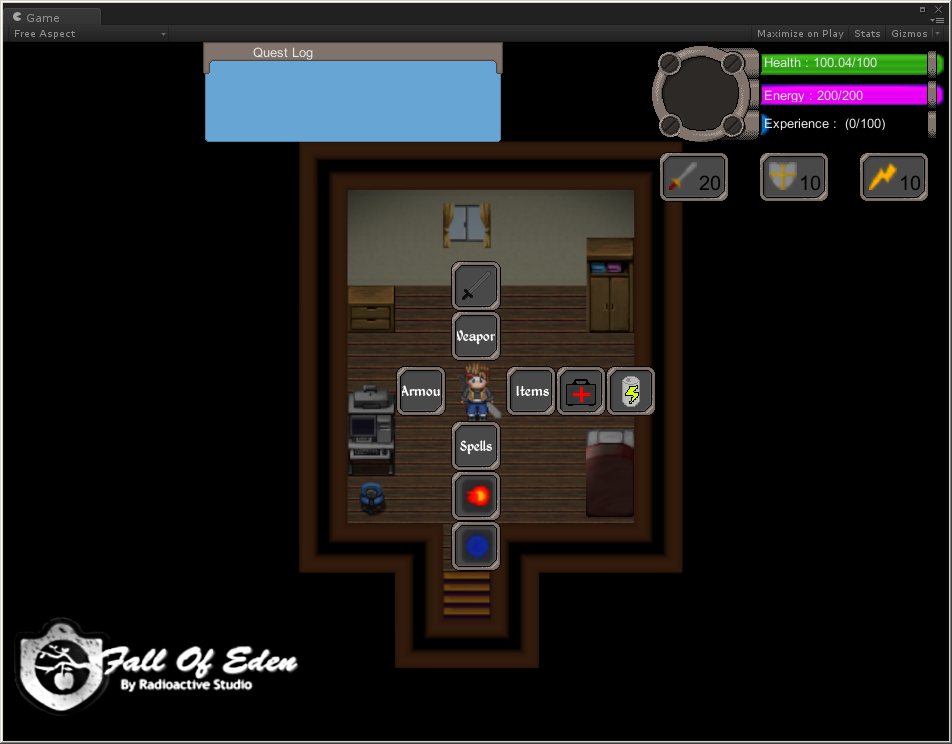 If you like what you see, don't be shy head over to our homepage, like us on facebook and if you have any questions please do not hesitate to ask us!

we have added a title screen with temporary textures, we have also added an options menu and a pause menu, all are fully functional.