A Shattered World - Return To Mars

Mars -­ a home to mankind in the distant past -­ is overrun with hostile alien species. But given the options in a world ravaged by catastrophic attacks, it seems man’s only hope of reclaiming a planetary home and saving its kind. Recolonising the shattered planet’s surface -­ whilst defending yourself against hostile alien species, and with only a simple comms system back to Exo Exit’s leadership? Your chances seem slim to none. One thing’s for sure: with the authorities’ dim views on your human rights, you’ve got nothing to lose.

Explore the ruins of a lost civilisation as you journey across an expansive landscape.

Defend yourself against hostile alien species in surface warfare/clashes/crossfire.

Search for resources to upgrade equipment, unearth past facilities, and satisfy your superiors on the Exo Exit.

Mine for resources to upgrade your equipment and trade with the fleet above.

Construct the beginnings of a base, a colony to re-­‐establish a home for mankind.

Manipulate the remains of technologically-­‐advanced machinery to use them to your advantage. 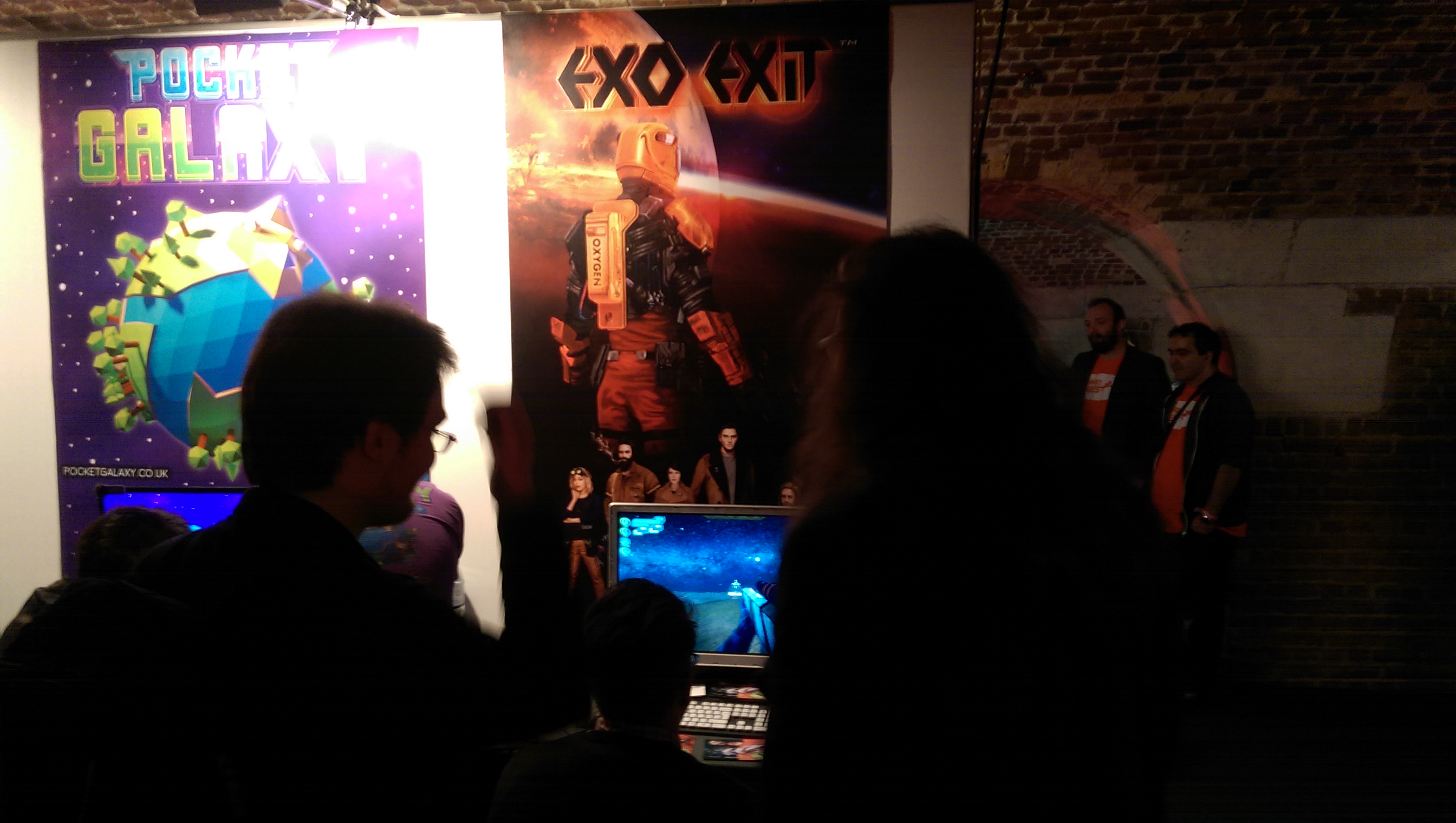 Last week, EGX’s REZZED games expo ran from Thursday to Saturday, exhibiting some of the best new stuff from across the gaming world. And that, of course, included Exo Exit. We spent three productive but knackering days at Tobacco Dock in Wapping – thankfully a far more interesting venue than the metal sheds that usually play host to these events.

As well as indie game stands, there were talks from developers, opportunities to mess around with the latest Virtual Reality software, merchandise stands… but a distinct shortage of bar facilities. Probably for the best.

With our little stand, our poster and our playable demo, we spoke to loads of gamers, developers, competitors and specialists. And we’re not afraid to admit that we learned a lot…

4) Involve more people. Standing up and chatting gets a bit… tiring after 8 hours. Tag-team manning of the stand also allows for attendance at presentations, regular comfort breaks, and even some off-duty ‘refreshments’

5) Go for a multi-machine set-up. As well as commanding a bigger floor space, you can get more people playing the demo, potentially even two simultaneously. Get yer elbows out, Exit!!

But we’re itching to do it again soon, and will be following up on some interesting leads.

Cheers to everyone we met. Stay in touch y’all.

The massive ship is not the first of its kind to grace the black. To our knowledge, it is in fact the tenth!

Watch our first Exo Exit gameplay video taster! Get ready for a FPS action adventure designed for VR on the red planet Mars!

Ham fixes things, he was doing this before the Exit and he now does it only on the Exit. Except now he’s got a fancy title, so people are actually listening...

Now on Steam Greenlight concepts section, please show some support if like what you see, thanks.