The game is based on a mixture of genres, like traditional roguelikes, tactical party-based RPG (or CRPG), management/base-building RPG and even a touch of action-RPG by its format, pace and art.

Why choose real-time combat instead of turn-based combat?

Because it tries to offer the best of both worlds: fast combat and precision in controls. Generally speaking, real-time combat allows for faster gameplay and a greater sense of action but usually makes the party more difficult to control compared to turn-based combat. The game uses an instant-action system on pause (There's no pre-casting timer) that gives a similar level of control over spells and skills as in turn-based RPG. By using instant-actions and bonus actions at key moments on pause, your party can chain a series of precisely controlled measures that can turn the tide of the battle instantly.

The underground empire mined and used powerful magic crystals to create abominations and crazy experiments which all backfired dramatically. The empire has now fallen and lies in chaos and disarray. As you discover the various apocalypses caused by the Mad Empire, will you be able to rescue the surviving citizens trapped in the locked-down underground? Can you even save yourself?

In its madness, the empire also used the crystals to create a whole class of absurd and cursed magic items. Those items are usually very powerful and bizarre. For instance, the effect of Brittle Daemon that transforms your base damage to fire, gives you +2 damage, 2 Ignite charges and 1 Fireball Charge, Immunity to Fire but weakness to cold, -10 to defense and sets you on fire (Yes you will set oil surfaces ablaze if you walk over them inadvertently). This helps give personality to your characters and adds to replayability and emerging gameplay.

Over the course of a mission, manage your spell charges, hunger, thirst, health, injuries, instability and consumables (potions, scrolls, food, drinks, etc.). Will you dare to equip that potentially cursed unidentified item or use that powerful unidentified potion right away? Perhaps you should wait until you have more scrolls of identification? Well, half your party is unconscious on the ground, you have to make a choice! Maybe you'll sacrifice that legendary chicken to distract monsters as you run? You'll starve to death but at least you'll live another day...

The core of the game is a rogue-lite dungeon crawling experience with randomly generated maps, random items or monsters spawns and perma-death.

Those ‘runs’ are organized in mission structures that you complete for rewards and progress. As you progress through missions, the story will evolve and new apocalypses, quests, threats and environments will be revealed.

Between each run, you’ll have the chance to manage your team and build your base. Recruit characters, train and equip them, craft or buy items and upgrade your base infrastructures to increase your management efficiency.

The game also features boss battles, hundreds of items and spells, a whole bunch of monsters based on different mechanics, numerous environments, quests, epic runs, etc., and will keep adding content during EA and after release.

Welcome to the first development log for Escape the Mad Empire! The game is a roguelike party-based tactical RPG upcoming on Steam. In this development log, we will give a general overview of the game structure. More specifically, we will cover the core game loop, the combat system, the story, the meta-game progression and the game modes.

The core of the game is wrapped around a traditional dungeon crawling experience. It features roguelike elements like perma-death, procedural generation, random monster and item spawns, etc.

One aspect we’re really focusing on is the diversity of effects associated with magic items. Apart from increasing replayability, having a great diversity of mechanics really helps to create emergent gameplay; mechanics interactions, player strategies and behaviors that were not specifically designed for. Emergent gameplay is a strong aspect of traditional roguelikes and roguelites like Spelunky, Binding of Isaac, etc. 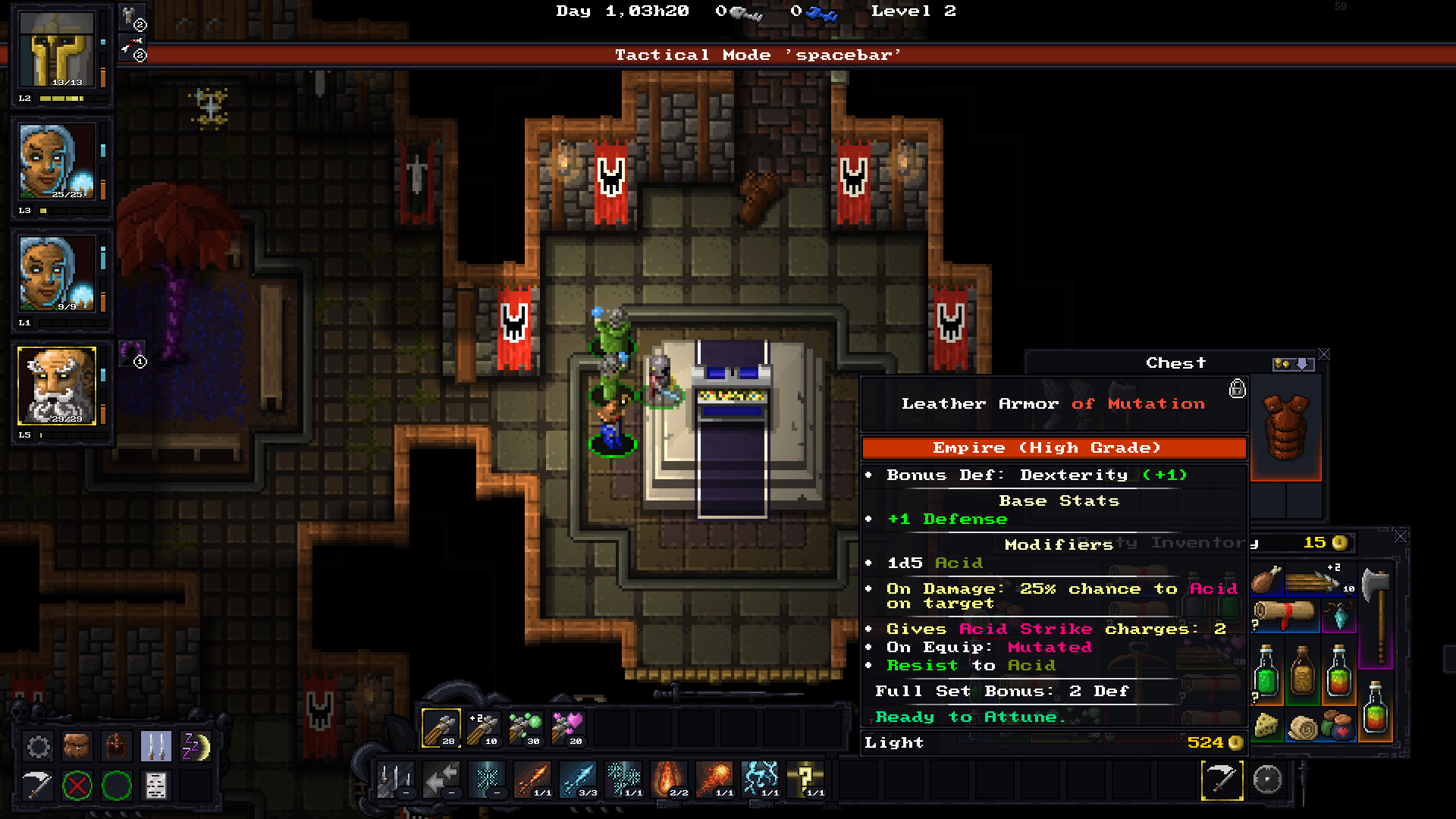 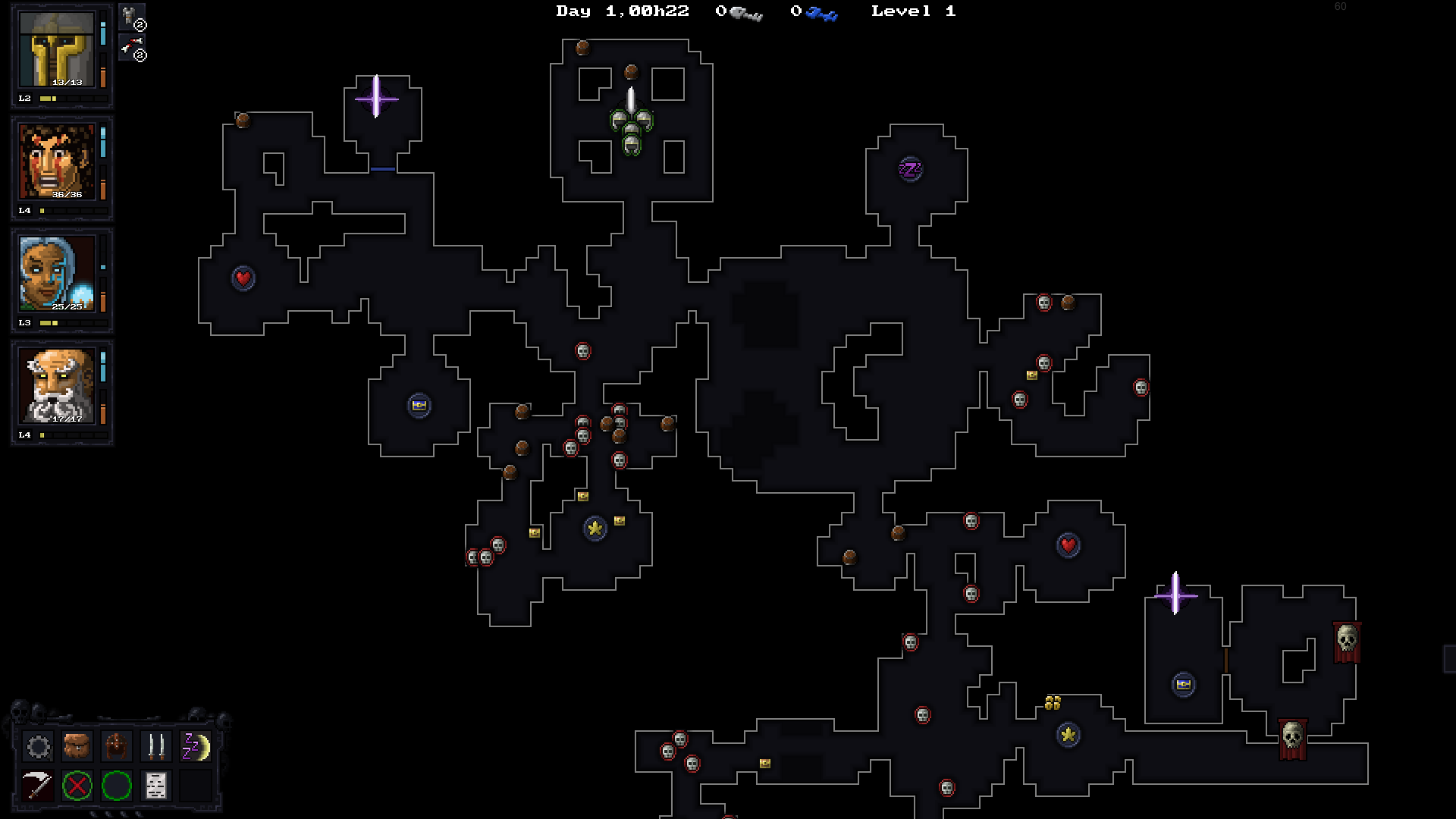 We won't dive too much in details about the combat system because it will be the subject of our next development log. Just to cover the essential, it is worth mentioning that the key aspects of it are the party-based and real-time with instant-actions on pause elements, which distinguish the game quite a lot.

In terms of how the game plays, the best comparisons are games like old Baldur’s Gate, Pillars of Eternity, Pathfinder or Divinity. The mention of a turn-based game among real-time games is voluntary. The principle of instant-actions on pause (without casting delays) really gives another dimension to the game, which bridges the gap between real-time and turn-based RPGs. The references also imply that the game also features a spells & skills system that feels quite ‘CRPG’.

There’s also tons of tactical aspects to the game that increase the combat depth but again, another devlog will be written about this subject!

This game mode is closer to traditional roguelike games. Each game has its unique random seed that determines the dungeon structure, the monster and item spawns and so on (such that a player can replay exactly the same setup if he wishes to). The party is rolled randomly to encourage playing with various combinations. Dungeon runs can be played over a configurable number of floors. The loot is powerful and affects the player’s game in significant ways. The game has perma-death, which means that a dead character is lost (rare revive scrolls exceptions) and upon party death, a new game has to be created from scratch.

As the story evolves, new environments, monsters and items will be introduced in dungeon runs. In other words, playing the career mode will also make the Epic Runs mode evolve. 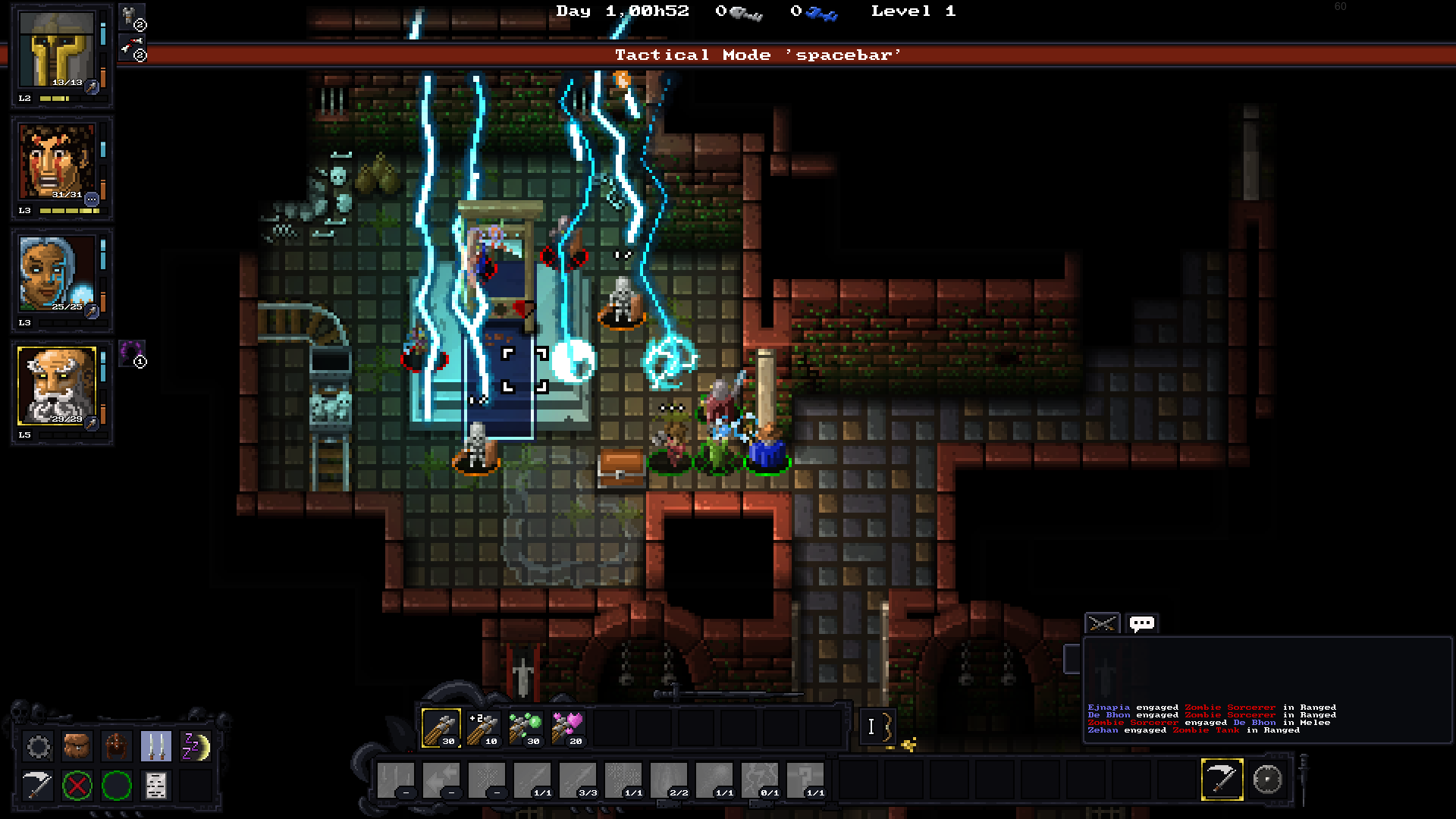 The meta-game is a way of adding a sense of progression between dungeon runs. Evolving story content and the addition of a career mode will serve that purpose.

The story is about an underground empire that discovered and mined incredibly powerful magic crystals they used to create abominations and mad experiments. Those doomsday devices ultimately backfired and created apocalypses across multiple dimensions.

As the game progresses, the player will reveal and discover those apocalypses. Apart from structuring the story content, those apocalypses will also serve as ‘content unlocks’ on which new visual thematics, monsters and items will be attached. In other words, the world will evolve with progression and dungeon runs will feel different.

Apocalypse themes also offer the perfect format for adding future content since those new episodes will be added seamlessly.

The career mode adds a whole new gameplay layer to the game by introducing teams management and base-building elements. In this game mode, dungeon runs become ‘missions’ that can be completed for resources, game mechanic unlocks and story progression. This mode also allows the player to play in shorter sessions compared to the Epic Runs mode for which games can take several hours at a time.

Between missions, the player will go back to his base HUB where can manage his characters, shop for items, craft and upgrade his base. Those upgrades will in turn be used to develop new party teams more efficiently.

Missions will be structured by apocalypse themes and their related chapters. Each apocalypse will feature several chapters with their own mini-story and each chapter will be linked to a series of missions to be completed in a semi-random structure (with optional reset for replayability).

Progression in career mode will ‘remain’, meaning that losing in a mission or even losing a whole party won’t affect the general progression. The player will have to recruit new characters, develop and equip them in order to fully recover. The whole career mode structure has a lot of similarities with games like Darkest Dungeon I. 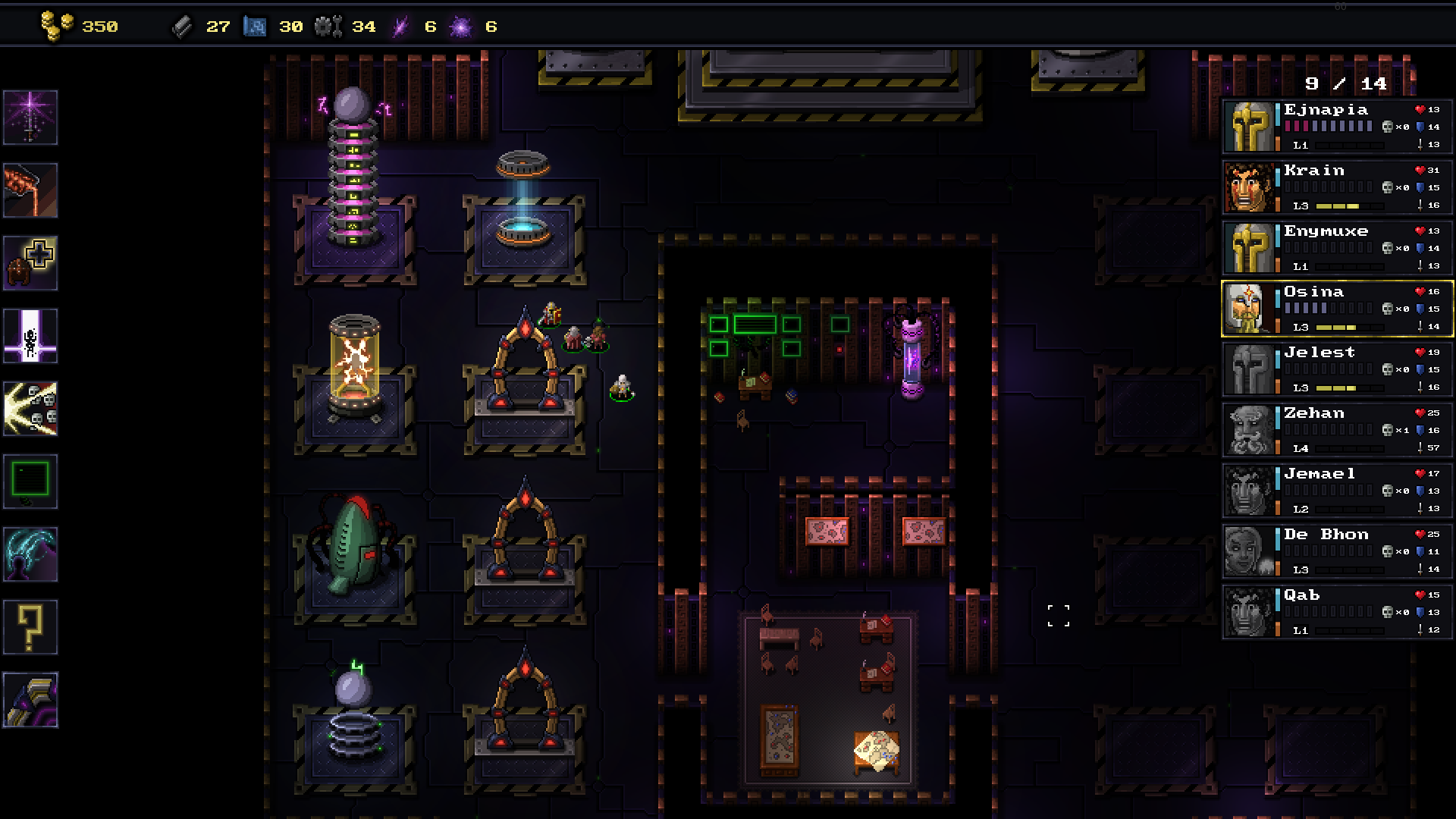 That’s it for the first development log! The next time we will probably cover the basics for the combat system. In the meantime, don't forget to wishlist or follow the game on Steam or follow us on twitter for more frequent information!

After over 4 years of development, Escape the Mad Empire is finally officially announced! The roguelike party-based real-time base-building tactical RPG...