You can soon become a master chef and cook hundreds of recipes!

We are in the bug killing phase which means the big update is just around the corner! Everything that we had been talking about in the last article is in its final stages to be played soon! This Post is going to focus only on the crafting since we have so much to share about it!

You will get your first taste of crafting as soon as you enter into the world; you know that chest everyone has been trying to break open when you first start? You can finally break it, and it will contain some food that you can use for crafting, along with beginning the tutorial for crafting!

Some crafting will require a crafting station to be made, but many recipes can be done anywhere from a crafting menu (currently bound to N, but you can also hit the button for it around your action bar at the bottom of the screen). Recipes will be grouped into categories and sub-categories based on their type. So Food would be the first main category you will have access to and things like grilled, salads, and soups would be a sub-category. 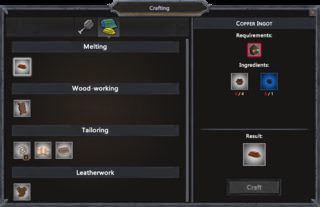 Crafting Window with a few recipes

Some recipes have special requirements like mentioned above where you have to be near a crafting station. For the chef profession, many of the recipes require some sort of fireplace or fire. We have set up multiple fireplaces in the world, so if you see a fire more then likely you will be able to use it for crafting.

As you level up, you will gain access to basic recipes, but for those chefs out there that want to cook rare foods will have to discover them another way. Once we have the quest system done some quest will provide you will recipes, but until that time we have added a 'recipe' item which can be used to unlock a random recipe you haven't learned yet. (We are interested in your feedback on this!)

Talking more about the Chef: Ingredients are found by traveling through biomes, some friendly NPCs will also be willing to sell some of them to you and enemies can drop them. The level of the biome will also be a factor, so if you can't find a given ingredient you may need to travel to a higher biome to obtain it.

There are upgrades in the form of crafting recipes that your chef will be required to cook for her to cook improved recipes, these are only needed to be crafted once as a eureka moment to expand her cooking knowledge.

These upgrades provide you with the tools to create more things, a magic knife to cut things into pieces, a magic pot to make soups. Best of all these tools don't take up inventory space so once you have unlocked them you will always have access to them.

We talked about the details of the food in the last article, but to recap, there are two kinds of food one that is meant for healing and then another that is intended for buffing.

Food that is used to heal is a heal over time effect, so save the potions for a fight if you get into a bind and use the healing food to recover after the battle.

Buff foods, however, provide a boost to many different stats, also every buff food will have an EXP boost to help you level quicker, so it is always a good idea to use buff food before fights. 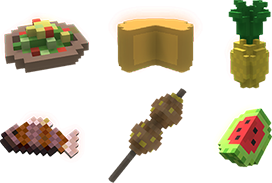 Like I said in the intro, we are to the bug phase of the update; we can't give a set time for when the update will be ready as the multiplayer part generally takes more time than expected. But we will be having our Streaming Partners playing the game for you all to see as soon as we are close. We know this update took longer than our regular update schedule, but with everything we added, I am sure you won't be disappointed with it.