An action 2.5/3D side-scroller with modern visuals and a wicked story! Classically inspired.

We get asked this a lot, and the answer is pretty simple. DümBot is an independently made video game about a dim-witted, mute, robot originally created for nefarious purposes and his partner, a paraplegic, redneck, talking zombie exacting revenge on their evil creator while trying to save the world from an apocalypse brought about through the use of zombies, robots, and robot-zombies. Simple.

DümBot’s story is presented as a 3D (Sometimes 2.5D) action platformer, taking advantage of today’s amazing gaming technologies, namely the Unreal Engine. We at Angry Rock Studios are trying our damndest to make sure that DümBot hits on all levels, fun, innovative, interesting, and still retain the feeling of the classic platformers that inspire it, and us, greatly. We set out to make a game that we would want to play ourselves, and as a strongly diverse group of gamers, we feel like that’s a solid goal.

The game has players taking DümBot and Jenkins through an alternate, war torn, near-future version of our world. Through ridiculous circumstances, The Mad Scientist’s (or “The Doc”) siege on the planet has begun, and the only ones who really have a chance to stop him are two of his very own “failed” experiments. With in-depth knowledge of The Doc’s plans and bases of operation, DB and Jenkins make surgical strikes on said bases, but he hasn’t made it easy on them. The player will have to navigate a ruined, zombie, robot, robot-zombie, infested section of popular cities and locales in order to enter the hidden base, then navigate through a technological dungeon with all of its own hidden traps and hazards. The Doc has also left his most successful experiments at the heart of each base, so DB and Jenkins will certainly have their work cut out for them even after trekking through hoards of zombies, robots, and robot-zombies (it really brings a smile to our faces whenever we say that part).

At its core, DümBot is truly a homage to the games we grew up with, and a natural next step in game design and depth for our small studio of dedicated gamers and artists.

Something Even More Unreal for Düm Bot. Powered By Unreal Engine 4! 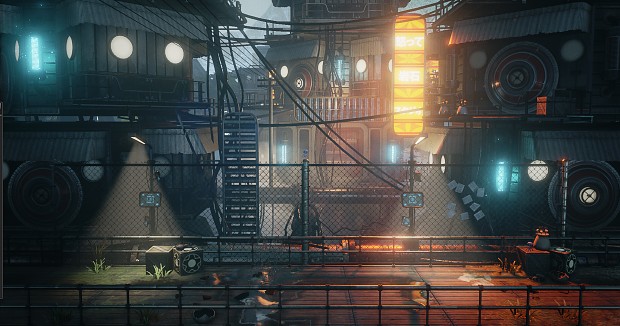 We at Angry Rock Studios are pleased, and honored, to announce that we are making our recently announced game Düm Bot with the highly anticipated Unreal Engine 4!

Really, the team is seriously thrilled over here, I cannot state that enough, and we want to thank our friends over at Epic and the team who created the amazing Unreal Engine for giving us this humbling opportunity to work with this amazing new engine. We've only been transitioning to the new engine for a few weeks now but we can already see the amazing differences this new engine brings to Düm Bot and gaming as a whole. Düm Bot will be able to really shine with UE4 and we're going to continue to push the boundaries of our creativity.

We could not wait to share this news with all of the people watching our progress so far and giving us their support, it means a lot to us and really helps motivate us to keep going. The team will continue to look towards the players and the past for inspiration as we move forward with this amazing new technology. Even though we're trying to push the envelope in any ways we can manage, we want to reiterate that Düm Bot is a game that will call back to old school action platforming, the kind of stuff you had to blow the dust out of to get working, you know. The games you left running for days because saving wasn't an option (we will have saving), and the easter eggs, oh the easter eggs. We're trying to blend the best of both worlds into a 3D Action Platformer that also has a heart (well, Robots don't have hearts, and zombies, well the heart is there, but the status of the heart is questionable...).

Unreal Engine 4 is allowing us to spend less time worrying about some of the most tedious areas of game develop and focus more on getting the most fun and polished experience out as fast as we can. The new visual capabilities of this engine are nothing to gloss over either, we swapped in assets and environments into the new engine and instantly saw a marked improvement. We'll be doing our best to make the most of it.

Thanks again to all of our fans so far and to everyone at Epic for making this groundbreaking engine,

The Team at Angry Rock Studios

So, now that you know the basic premise of this game, I feel like delving into some of the aspects of pre-production that could turn such a wild idea...

Thank You For Your Support!

It has been a week since we’ve officially announced Dümbot! In that week we spoke to tons of people and we are more than grateful for all the support...

What is DümBot? - Official Game Announcement

What is DümBot?We get asked this a lot, and the answer is pretty simple. DümBot is an independently made video game about a dim-witted, mute, robot...

Excited to give it a try!

A game where I gladly voted for the Indie Game of the Year :) Good luck!

Much appreciated! That's really awesome to hear actually. We're working extremely hard to push some serious footage out over the course of the next month.

Good luck to you! I really love your art style, great artists! (but the rest is as good as them aswell I think :P)

It looks awesome, can't wait to see your progress.:D

Thanks so much! We're trying to update whenever we can. Be on the look out :D

Wimp: Who Stole My Pants? Platformer