Consider this game an experiment. We are building an SDK on top of famous Idtech4 engine. You can play, share and change everything in it

In order to try the game you have currently two options:

If you have trouble to make the game work, want to fix something or simply let us know what you think about it, feel free to write a comment or push some commit. 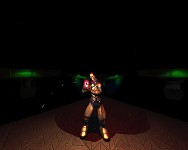 The main goal of this release is to have a bit of fun, but personally i would like to see more people touching code and developing 3d videogames.
Everything in D.R.A.P. is open. Starting with engine (which is idtech4) and going through all the assets ingame. So if you don't like any aspect of the game, you can simply grab GIMP or any other tool, edit and make your work public (or not).
Tune, create your own game or mod, share with your neighbors and have fun!

Hi D.R.A.P. followers! Have a nice Christmas and happy new year! Oh fine, i really just wanted you guys to know that the game will be released Q1 2015...

I don't know why, but Id tech 4 engine is not on the list, so we just marked our game as "doom engine" based. Already emailed the problem to indiedb...

No installer is provided, but the steps to get the game working on Apple's Mac are the following

No installer is provided, but the steps to get the game working on Linux are the following

New build is available for download. Several bug fixes and new map (DM4 with test light only). Had no time to release a new engine version, sorry about...

This build was tested at nerdear.la event on May 13'th this year. Two playable maps are provided in order to test latency impact on Idtech4 engine. Big...

Are... Are you REALLY re-inventing the Doom engine!? You've got guts kid. A lot of guts! alright. I can totally back this! Any way I can support you? I mean, I'm an OK programmer, an Exelent MapMaker, and I actually make Soundtracks for a living!

Thanks! Sure you can do something. Feel free to push some commit on github when you like it

Who voted 10 out of 10 when there isn't a download on Moddb?

The guy's name is on reviews page.
Do you really need something to be available to download in order to vote? That would be fair i guess, but no rule for that as far as i can see.
BTW the game is available already, so you can try it and rate as you wish. I will submit some build in the future, sorry but had not time for that

doom 3 or bfg ?
Apologies for sounding thick as a brick :)

Not at all, it is really a bit confusing. We are using legacy Idtech4, in part because of MP not working well on BFG version

i can do this with lots of games right now :)

How about github access to the content :) Every change we make, you see it right in your browser!
Now really. I am uploading right now, only few more days