Double Happy Vs. The Infinite Sadness

Set forth on an epic journey with Double Happy - a pair of neo-pop edgy cute rabbits to overcome the entropic, all consuming power of the Infinite Sadness.
Challenge both your brain and your reflexes as you solve puzzles and complete action mini-games, unraveling the secrets of the Isles of the Ancients and discovering the corruption plaguing the lands.

Pharos is the first stop; a land of light now fallen to darkness. Will you help our manic heroes restore this land to its former splendour? Or will they be next on an Oolarkian menu...

The games take cues from other quirky comedic games such as Oddworld, Neverhood and Machinarium, creating a unique and contemporary spin on the old point and click adventure, with piques of trigger response action peppered throughout. In a game design twist, we’re extending an invitation to the community to conceptualize features of the game world through multiple creative competitions, giving artists an opportunity to have their designs featured throughout the game world.

We've been nominated, TWICE, in this year's South Australian Screen Awards!
The judges have put us forward for Best Web Series and Best Animation which is really awesome! Winners are announced on May 16th, so we'll keep you posted. If you haven't checked our webisodes out yet, you can do so on our YouTube channel! 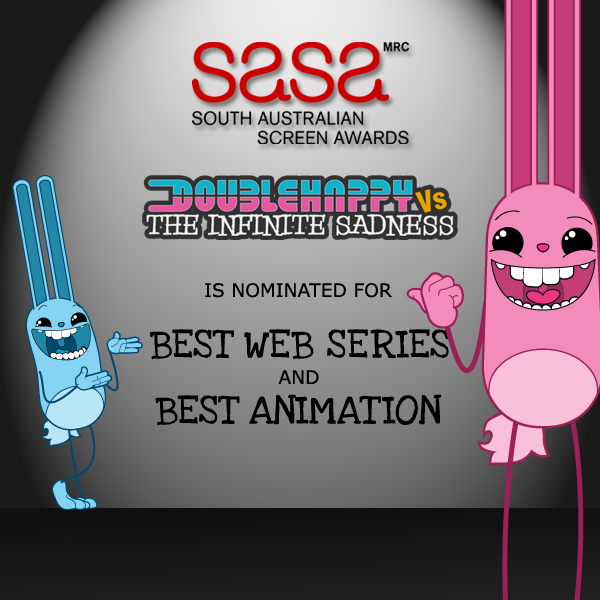 In other news, we're still working hard on our EPOC; our proof of concept for game play in the Double Happy Universe.
Here's a shot of our menu buttons in their glowing glory!

And here's how the menu looks as a whole, sans text. There were a few motives here; we'd like to say the only reason there isn't any text is to make it multilingual, but you know...pretty pictures!
Can you tell what each of the buttons do? 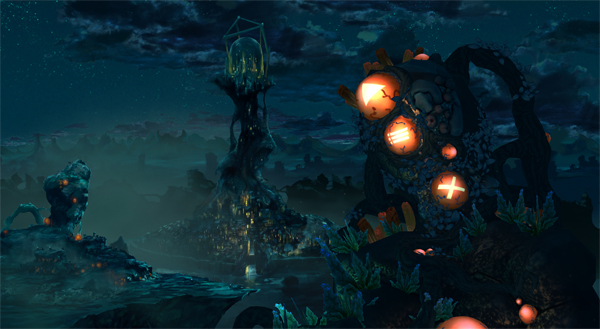 We've also still been working on our cinematics - previously we've shared a frame from one of them (you can check it out HERE!) but with any sort of luck we're just about finished with the two made so far. They have been a long time in the making, but looking at them now it has definitely been worth it.

What considerations did you make in creating your menu? Any favourite game menus to share?

It is often said that designing logos for your own projects or company is the hardest. Troy, our Art Director, talks about how we got to the Double Happy...

Assets for animation can be tricky. Chris gives us a few examples of how the team developed the art to make the rabbits come alive.

Backstage with our Animators

The Double Happy webisodes are bringing our game's heroes to life, but how are they animated? Lead animator Alex Graham takes us through the process.

We've got some WIP shots of the first puzzles and game screens as well as a sneak peek at one of the first cinematics!

When you take your game to a convention, physically make your heroes. To scale. And let people play with them! (Works a treat. Trust us) Carly Wight tells...

Illustrator Chris Green takes us through the design of our rabbit heroes Pink and Blue.

That's crazy and I like it ! Nice characters ;)
Great shorts, I hope you'll be able to keep the same energy with the game.

Cheers! We like it too! :)
The webisodes are designed to give everyone a good idea of Pink and Blue's character - so it's really great to hear you're picking up on the energy.
Thanks!

I hope the game comes out soon.

Hello!
The game is 3D, but with some 2D styled elements. We're working on a gameplay trailer to really show it all off - our Facebook and Twitter accounts (as well as here on Indie DB!) will be the best ways to keep up to date.
Facebook.com
Twitter.com
Thanks for touching base!

Twitter
Tags
Embed Buttons
Link to Double Happy Vs. The Infinite Sadness by selecting a button and using the embed code provided more...

Attack of the Assholian from the Planet Ass Adventure