Don't Move is an experimental puzzle platformer with a focus on ludonarrative dissonance and player investment manipulation. Don't Move starts simply: move left or right. But as you try -- and as you fail -- to move, you unlock more of the game's mechanisms. With each new element comes new challenges and more rewards! Available for Windows, Mac, Linux, iOS, and Android.

Don't Move has been busy on Steam! If you haven't seen it yet, here's the Greenlight page:

First of all, Don't Move is in the top 100! This is incredibly awesome, thank you so much for all of your support!

Second: Don't Move will be available in a bunch of languages when it releases on Steam! The full list includes:

That's a lot for one person, so if you'd like to help with translation, I made a localization tool which you can see here: 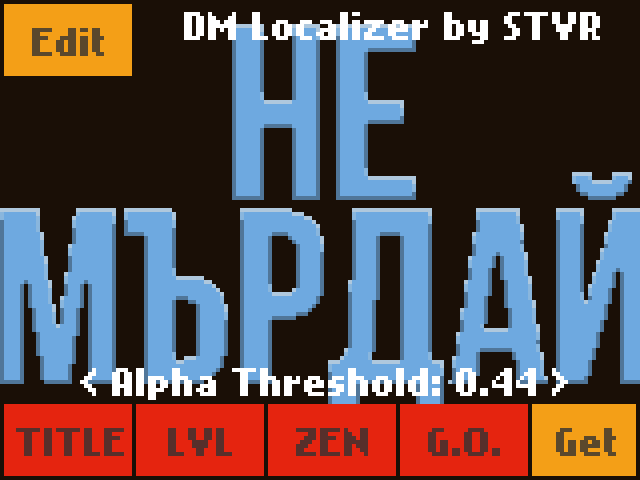 It's even open source, so feel free to use the code for your own text-to-pixels generator!

Third: achievements! There's a preview available on Steam, or you can just see them here:

Fifth: you're awesome! No, seriously, you rule. Keep it up. Thanks so much for supporting Don't Move, and we'll keep our fingers crossed for being Greenlit in the next batch!

Don't Move is now available for Windows, Mac, Linux, Android, and iOS! Check us out on Greenlight!

Don't Move is on Steam Greenlight! Read on for more news and info!

Don't Move is now on Greenlight! Vote for it please!

Don't Move is now available for Mac, Linux, Android, and Windows. Read on to find out how to get Don't Move delivered straight to your eyeballs!

Classic and i love it !!

I am the same person who found the qr, I just got 101%. Any other secrets?

Yep! This game has a ridiculous amount of secrets.

Has anyone else gotten a strange QR code on their second playthough? STVR, should I leek the message out?

Alright but I feel like making people find it themselves. Stand next to the glass on the left to get a qr code. Be warned it takes a while.

Just finish this game in about 1 hr, But I still don't know how to deal with the final LR puzzle...

Boring game, if you really have time to play it I guess your one person that gets easily amused

What did you expect it is called dont move

I don't think that this game deserves the negative reviews it has been receiving, but it does prove that this game certainly is an acquired taste. Don't Move is a game about progression, but there are no real objectives, tasks, storylines or anything similar because it just isn't that kind of game. While it may come off as too simple and repetitive (which it very well is) at first, it has a compelling ability to keep pulling you back in to see what happens after you have reached the next stage of…