Divi - Battle with the ancient gods

Divi is an upcoming free-to-play online collectible card video game developed by VanJaap. It is currently in the private beta, but is accessible to players. Divi builds upon ancient mythologies, various religions and modern folklore by using the characters, events and locations of these stories. The game is a turn-based card game between two opponents, using constructed decks of 40 cards along with a selected avatar with a unique ability. The avatar ability can be either activatable or a passive effect. Players use their devotion to cast spells, use relics and summon units to attack the opponent, with the goal of reducing the opponent's devotion to zero, emptying their deck or increase their own devotion to 500. Winning matches and completing trophies earns experience and in-game currency called tokens, which can be exchanged for new cards. Do you dare take the reigns, control the gods and win? Then let the battle begin! 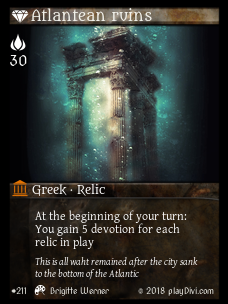