A first-person, narrative-driven puzzle game. Dimensional throws you into dangerous chambers to save an alien race. This is not a passive experience. You'll have to feel and act as though you're really there - standing, moving around, manipulating objects and reacting to dangers.

The game addresses the use of room-scale tracking in a small area in an innovative way.

Sole developer Brett Jackson has launched his first-person VR puzzle game, Dimensional, on Kickstarter. The game sees player solving physics-based puzzles and traversing rooms, but with a specific focus on encouraging "real-life movement" as a part of those solutions.

To this end, Dimensional introduces an interesting system designed to tackle the big issue of locomotion in VR. The player is able to initialise the game by walking around their available space, which creates a grid on the floor that always displays the player's position within the room itself. This means the player is able to define the size of their play space, even if it's not as large as what the VR hardware itself supports. With this system, it's possible to play the game with just 1.2m x 50cm of space. 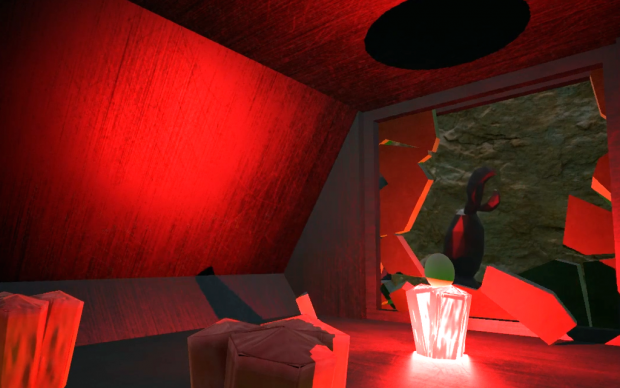 As with a number of other VR games, the player is able to move around the room beyond those boundaries with a teleportation reticle. The difference here is, you're able to align and rotate your defined grid at your destination before committing to teleporting toward it, so you have fine control over your positioning and orientation. This is necessary, as many of the puzzles require you to lean through or around objects in order to solve them.

Dimensional is being made under what Brett calls "Project 260" - an attempt to fund himself for 260 days to produce a game. How Dimensional's conservative funding goal of just a thousand pounds plays into this is unclear, but four pounds will score you a release version that's estimated to arrive in May this year.