Version 2 of Dimensional has introduced "Arcade Mode" you can now instantly jump to any challenge in the game and also tag your favourites to create a playlist that you friends can play. The game should now be a great way to demo what VR is capable of.

A first-person, narrative-driven puzzle game. Dimensional throws you into dangerous chambers to save an alien race. This is not a passive experience. To succeed, you'll have to feel and act as though you're really there. You'll be standing, moving around, manipulating objects with realistic physics and reacting to dangers.

More than just puzzles and action, I'm trying to put you in a variety of unique situations that can only be appreciated in VR. There's lots to experience and I have plenty more ideas coming. Here are just a few examples of what you can experience today:

There's a story for you to find. It's up to you if you want to find the hidden messages and work out what's going on, or just play through the levels and complete the puzzles.

Dimensional has raised 130% of it's goal on Kickstarter (ending 11th March 2016) and is heading for it's first stretch goal to include hidden easter-eggs in the game. More features have been announced during the campaign. 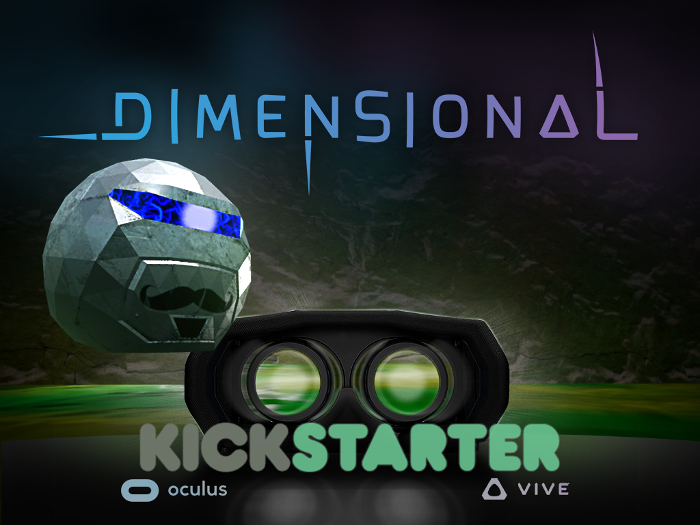 The most recent announcement was that the nausea-free locomotion system that uses physical movement and teleporting is being enhanced to optionally allow FPS-style controls to be used. The feature will be disabled by default but can be enabled by players that have become accustom to controller based movement in VR.

Another update describes how the microphone can be used to bring your voice in to the game and affect the actions of game characters. The video below shows how it works and gives examples of how it can be used in the game to interact and pass obstacles.

Dimensional is running a Steam Greenlight campaign and is looking for votes. If you are interested in the game please show your support on Greenlight .

Please see the Kickstarter page for more details on Dimensional

Live on Kickstarter now. An experimental VR-only game with innovative movement mechanics. Use physical actions to navigate dangerous chambers and save...

The game addresses the use of room-scale tracking in a small area in an innovative way.

Quick patch to fix issue for Oculus users with a single camera. V2.0.0 notes - The demo has now been updated with numerous improvements including upgrading...

The demo has now been updated with numerous improvements including upgrading to Unreal Engine 4.15 and using the Forward Shader with MSAA.

This is a demo of the full release of Dimensional (i.e. out of Early Access). It includes tracked controller support and various improvements

The Dimensional demo has been temporarily extended to include a Halloween Trial within The Trails level. Use Digby to smash pumpkins. Use the environment...

Bug fixes and improvements over 0.2.2. This demo includes the first two levels + The Jump (in credits level) + the Laser challenge (in The Trials level...