Meet Lucid, a little flame trapped in suffocating heat and caught up in a constant déjà vu that will lead her to discover the importance of audio in video games. Explore dynamic music, constructed languages, emotional sound, and lots of more! Game Design and Audio by Burn Interactive Sound. Art and Programming by Glitchy Pixel.

We're Burn Interactive Sound - a group of musicians and sound designers who decided to make a game about the importance of sound in video games. This month we're happy to announce that we've finally released it! It's free, and you can play it now! "Déjà Vu - A Game Audio Experience" is a co-production with our super talented friends from Glitchy Pixel who helped us with the programming and art :) 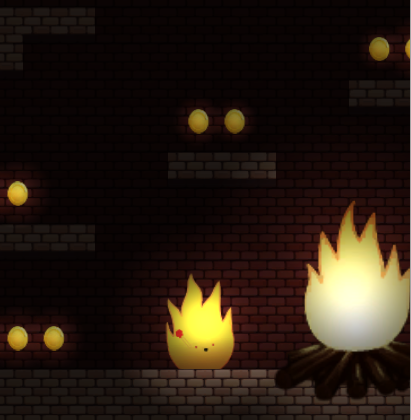 Image of Lucid - the main character of the game

"Déjà Vu" is a platformer game with 5 short levels that will allow you to explore dynamic music, constructed languages, emotional sound, and lots of more! Lucid is a little flame that is trapped in suffocating heat and caught up in a constant déjà vu. This is her first adventure that will lead her to discover the importance of audio in video games.

Watch a video with some gameplay footage below:

Audio to influence the perception of the image

Our goal was to make a game that could demonstrate why and how sound is crucial. However, we didn't have much budget, so we decided to make a story that would revolve around a déjà vu - this way we would only need one scenery (ideal for our finances). This would also allow us to demonstrate how sound can influence the perception of an image; as you'll experience in the game, changing the sound of a single scene can completely change the whole game experience. Sound can influence your emotions at subconscious levels. Sound can manipulate your thoughts and make you believe that something is sad, or happy, or scary. The potencial of sound is huge but barely exploited among many developers.

The music in Déjà Vu is dynamic, which means, it changes depending on player actions and game events. This is necessary to avoid tracks from sounding repetitive. In Déjà Vu, the music is NOT comprised of loops that repeat exactly the same again and again. Instead, songs are made up of blocks that are stitched to one another in real time depending on gameplay. In addition, the music in level 3 has layers of instruments that are added as the player advances in the game (a useful resource to add variety to the music).

In Déjà Vu, we intended to produce an illusion of a real language for Lucid and for the God Flame. We might eventually write another article about this topic, but in general terms, we created a list of words that would be used with certain frequency, such as "sonus" (sound) and "musus" (music). 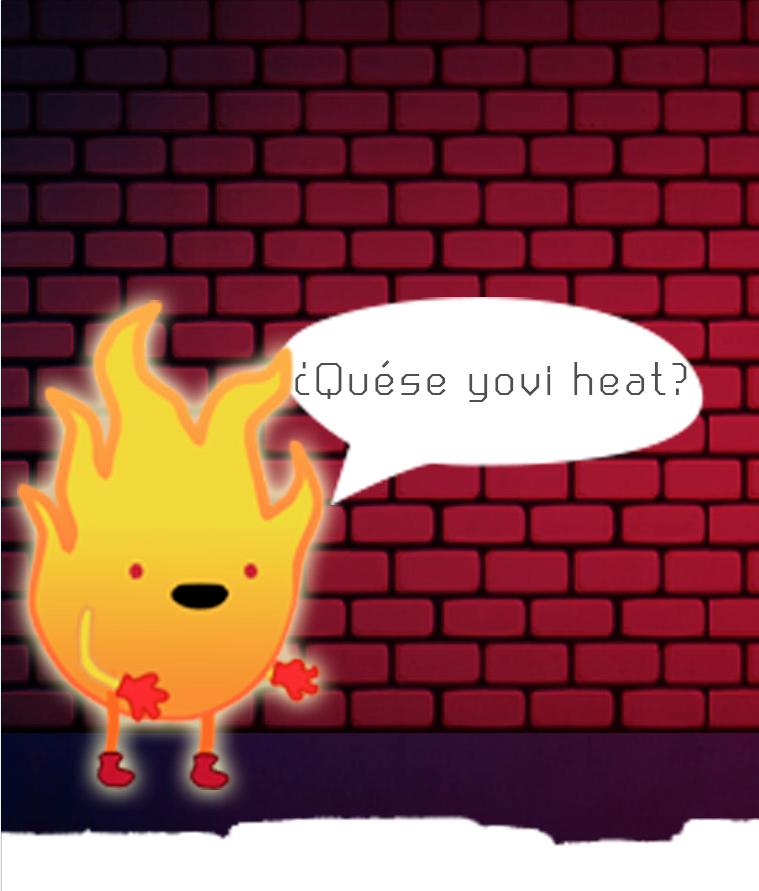 Déjà Vu was developed in Unity. We wanted to implement dynamic music, but we also wanted the game to be available to play online. Unfortunately, Unity isn't very flexible for audio, and we began to have gaps and pops between music blocks. We thought about using middleware such as Wwise, but it was not compatible with Web. Finally, we decided to use Fabric, a plug in that is basically an extension of the audio system in Unity. By the way, we'd like to give a special thanks to Italo Capasso, programmer of the game, for having done such an awesome work and being so patient with us.

The standalone of the game is available for Windows, Mac, and Linux. You can also play it online through our landing page if you have Firefox or Safari. Play the game online HERE. 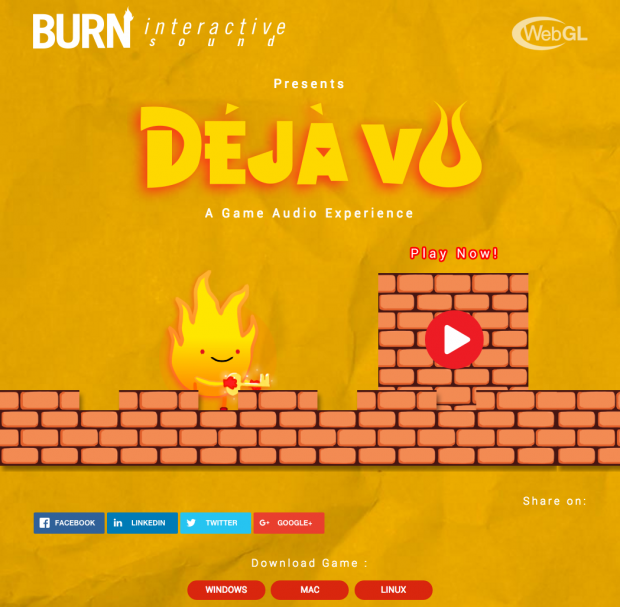 Image of our landing page.

We are three founders at BURN Interactive Sound: Tariq Burney, Filo Martínez-Aparicio, and Naila Burney. We are all based in Bogota :)

Naila is the manager of these two chaps. She's the one in charge of all the PR and marketing. She's also the sound designer of the team. Naila runs a game audio blog for the Spanish speaking community available at this link. 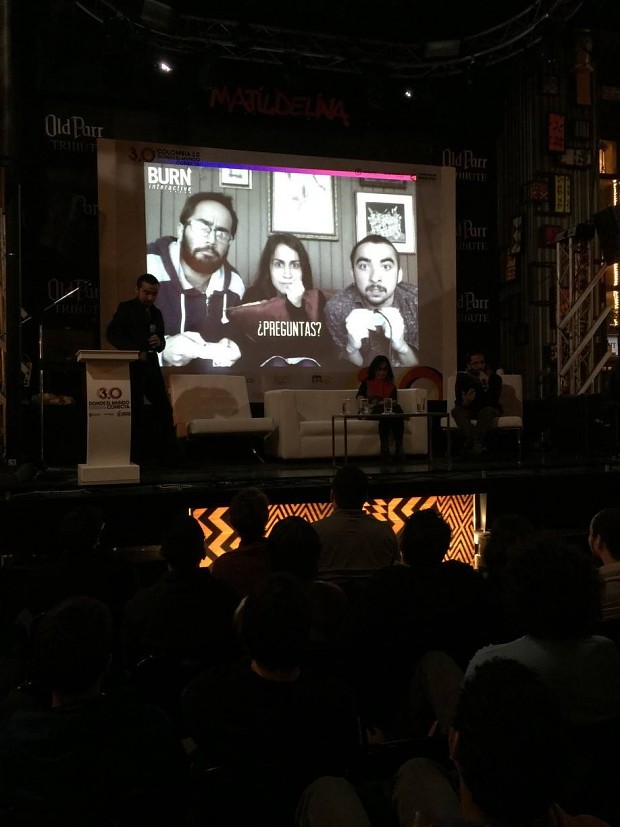 A picture of us at a talk we gave about fictional languages at the event "Colombia 3.0"

Our partner developer for this project was GLITCHY PIXEL, comprised of Diana Pacheco (artist) and Italo Capasso (programmer). Yes, they are the creators of Poltergeist: A Pixelated Horror. Both did an outstanding work and we are very grateful for having them helping us out :) 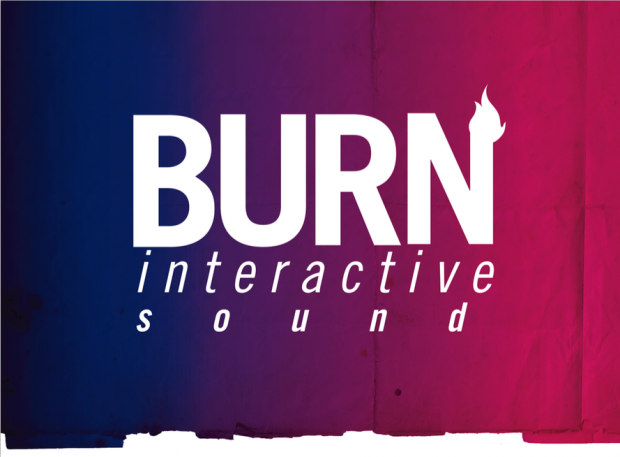 Art and Programming by Glitchy Pixel. 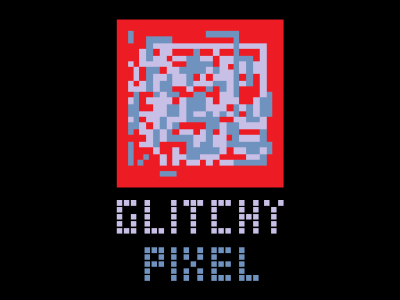 We hope you enjoy our game. Yes, we know it's short, and we know it could be improved, but it's a start. If we get enough support, this could be the first release of a series of games that address different aspects related to audio :) If you like our game, help us spread the word so we can continue with the series of Lucid's game audio adventures! Feel free to share the links to the game, and please let us know what you think, all comments and constructive criticism are welcome!

Please visit our sites for more info about us and our projects :)

Lucid is a little flame trapped in suffocating heat and caught up in a constant déjà vu that will lead her to discover the importance of audio in games...

A Song in the Void Platformer