This week it's all about stations and resources in Deep Space Settlement.

There was a question this week about what resources are in DSS. Instead of just linking to my response, I'm going to elaborate on it here.

Resources and through them the creation of a local economy of supply and demand is integral to DSS. It's also what really sets DSS apart from other space strategy games. This is the reason why I like to describe DSS as "The Settlers meets Homeworld."

This research tree provides an overview of most(not all) resources currently in the game. There's going to be more as we add in more stations. 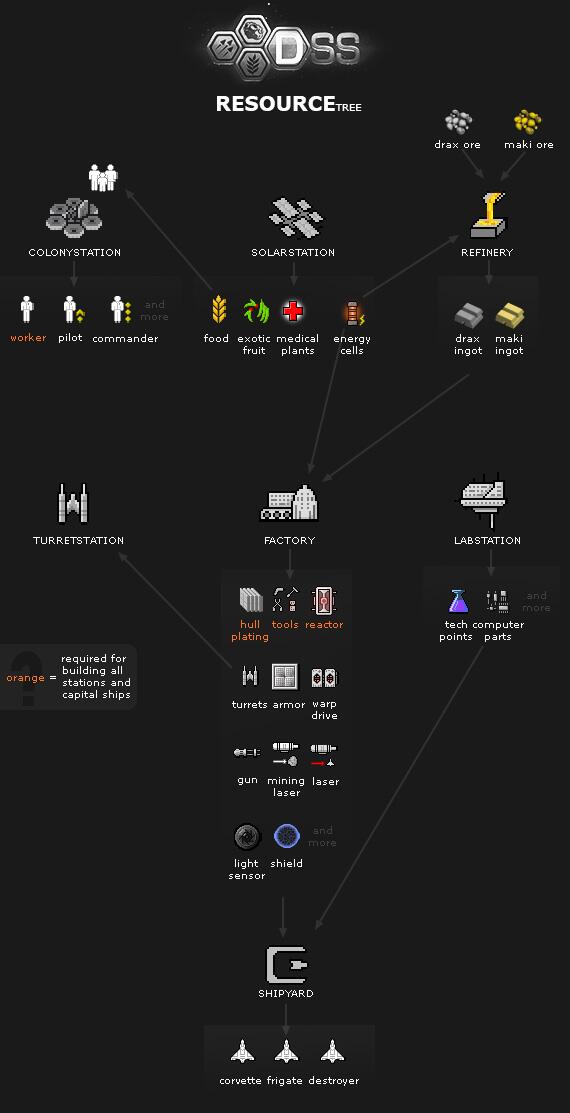 Refer to the image above, when you read the following paragraph.

Let's say you want to build a station. The resources you need for most building projects are: hull-plating, tools, workers. Once you chose a location for the new station, your transporters get busy delivering all you need and when all necessary resources are delivered the building process starts.
Your Colonystation has a few of the common resources in cargo to get your young settlement started, but eventually you will have to produce them all by yourself.
How would you do that? It starts by mining ore, specifically Drax and Maki ore. Both can be converted to ingots in the refinery using energy cells. So Drax ore + energy cell = drax ingot, etc.
Those ingots can then be used to produce for instance hull-plating at the factory station.

This may sound complicated written out like this, but it's very straight forward in the game. It works using a top-to-bottom approach. You don't need to pre-plan having enough ore or ingots to build hull plating. All you do is order hull plating at the factory station. Miners(corvettes with a mining laser) will then make sure there's enough ore at the refinery and transporters(any ship set to "transport mode" will make sure to bring enough energy cells over from the solar station.

If you want to produce something more complicated than hull plating, like say a corvette, it works the same way, but starts higher up. You go to your shipyard and order a corvette. Transporters will now make sure, depending on your corvette design, that there's enough hull plating, a reactor, an engine, a laser, etc. All of these are resources, produced at some station. All of the small ships you may have seen flying around our videos are corvettes set to transport mode. They take resources from where they are produced to where they are needed.


Here's a few screenshots going through most stations and units of the player faction, with a short description of what each does. 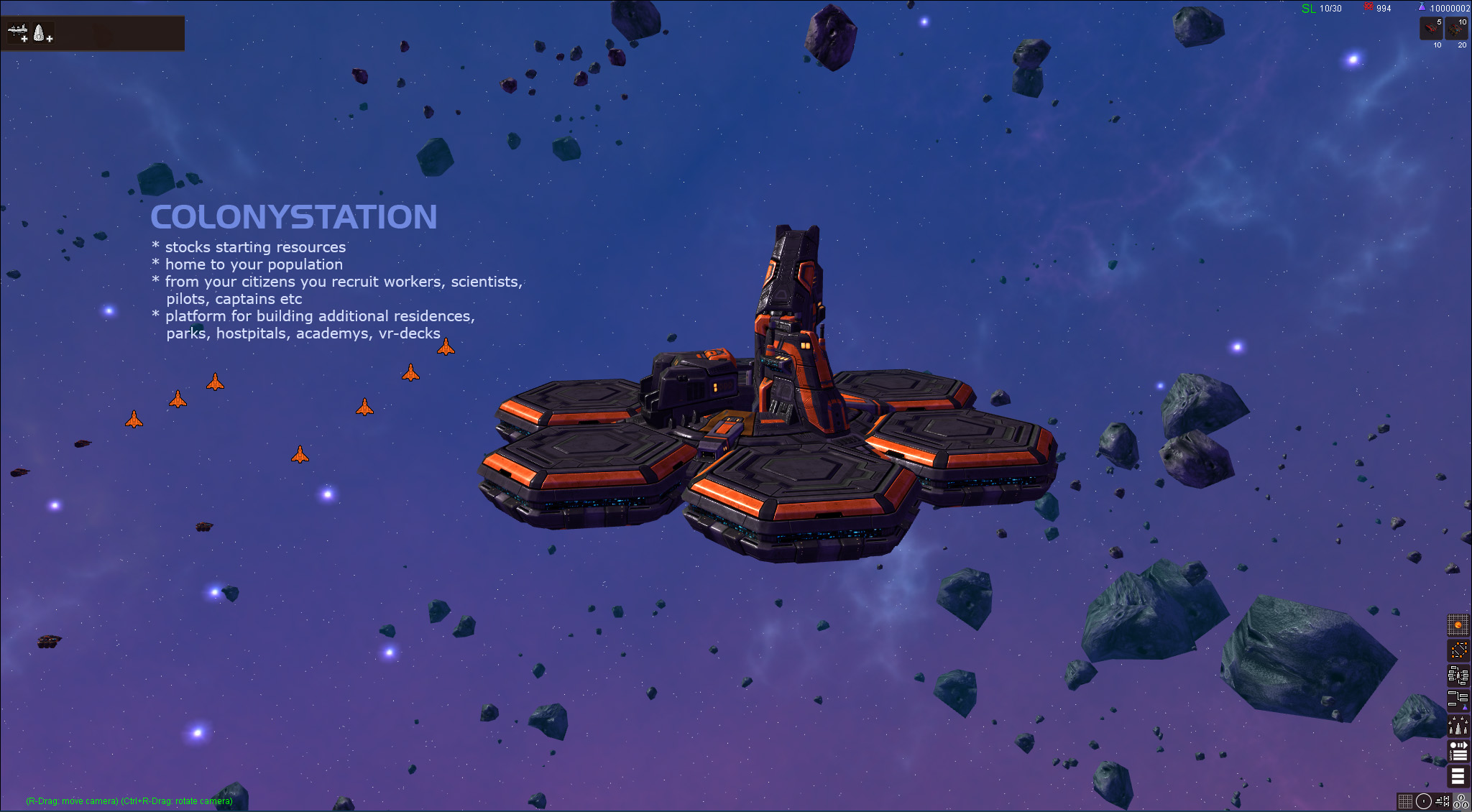 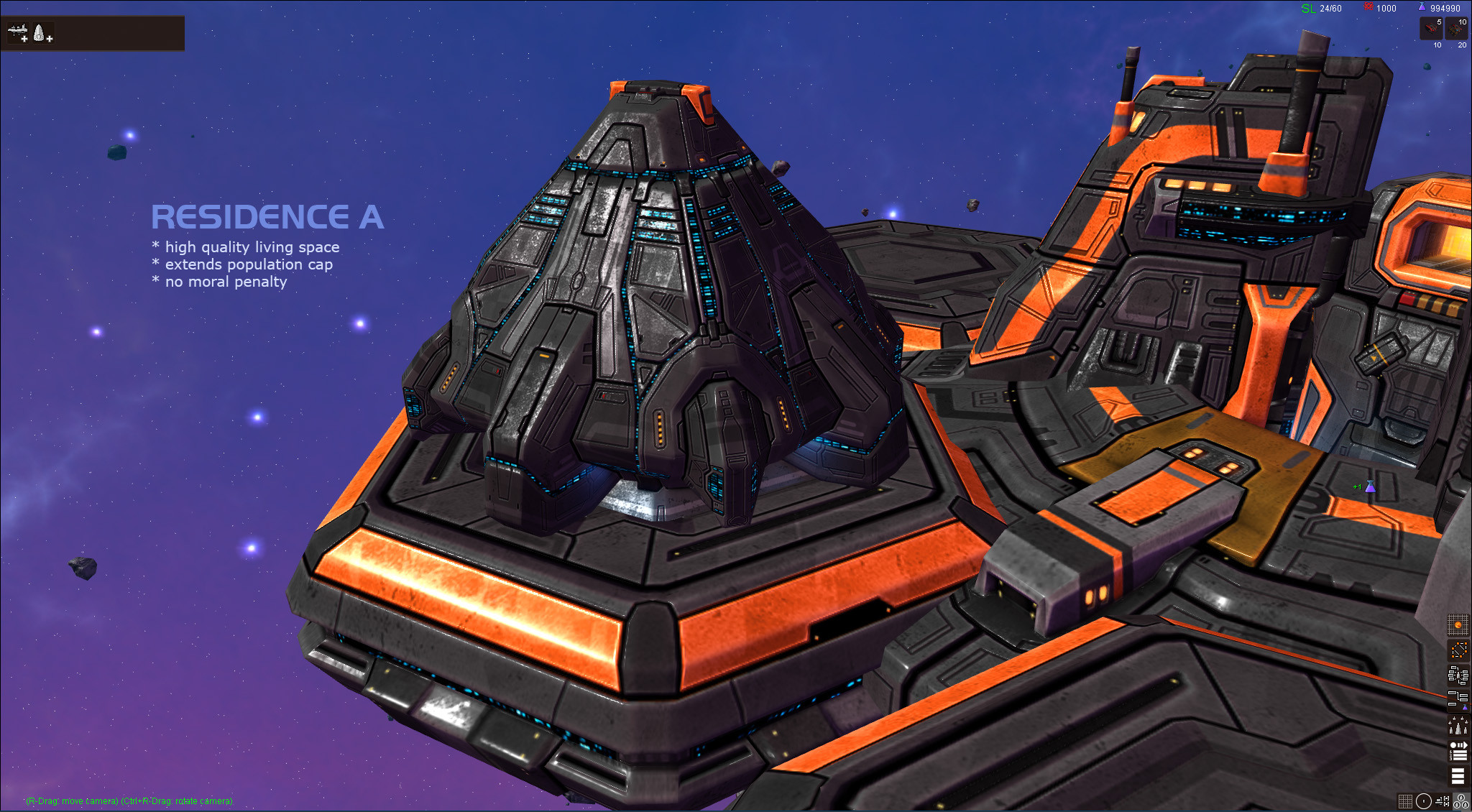 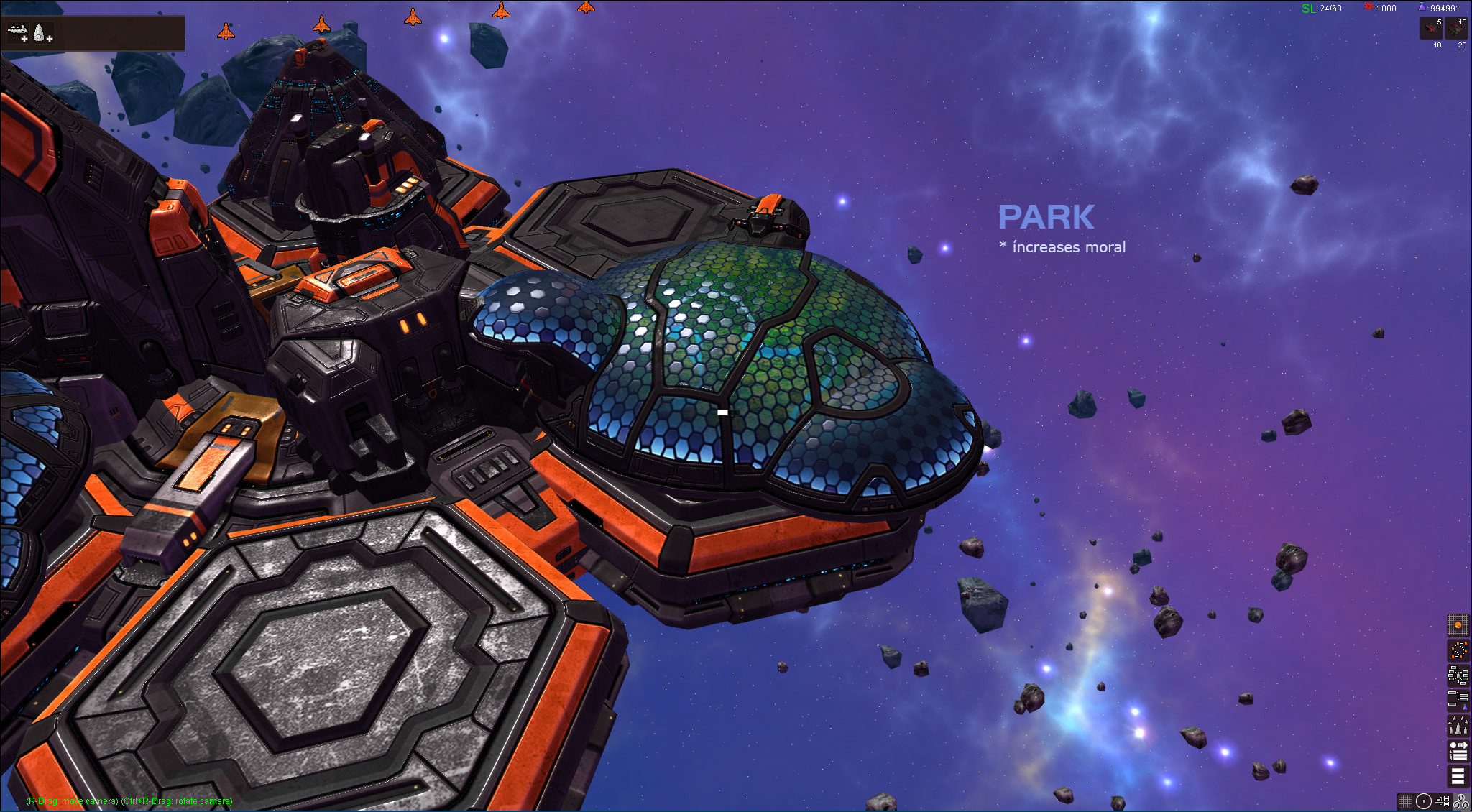 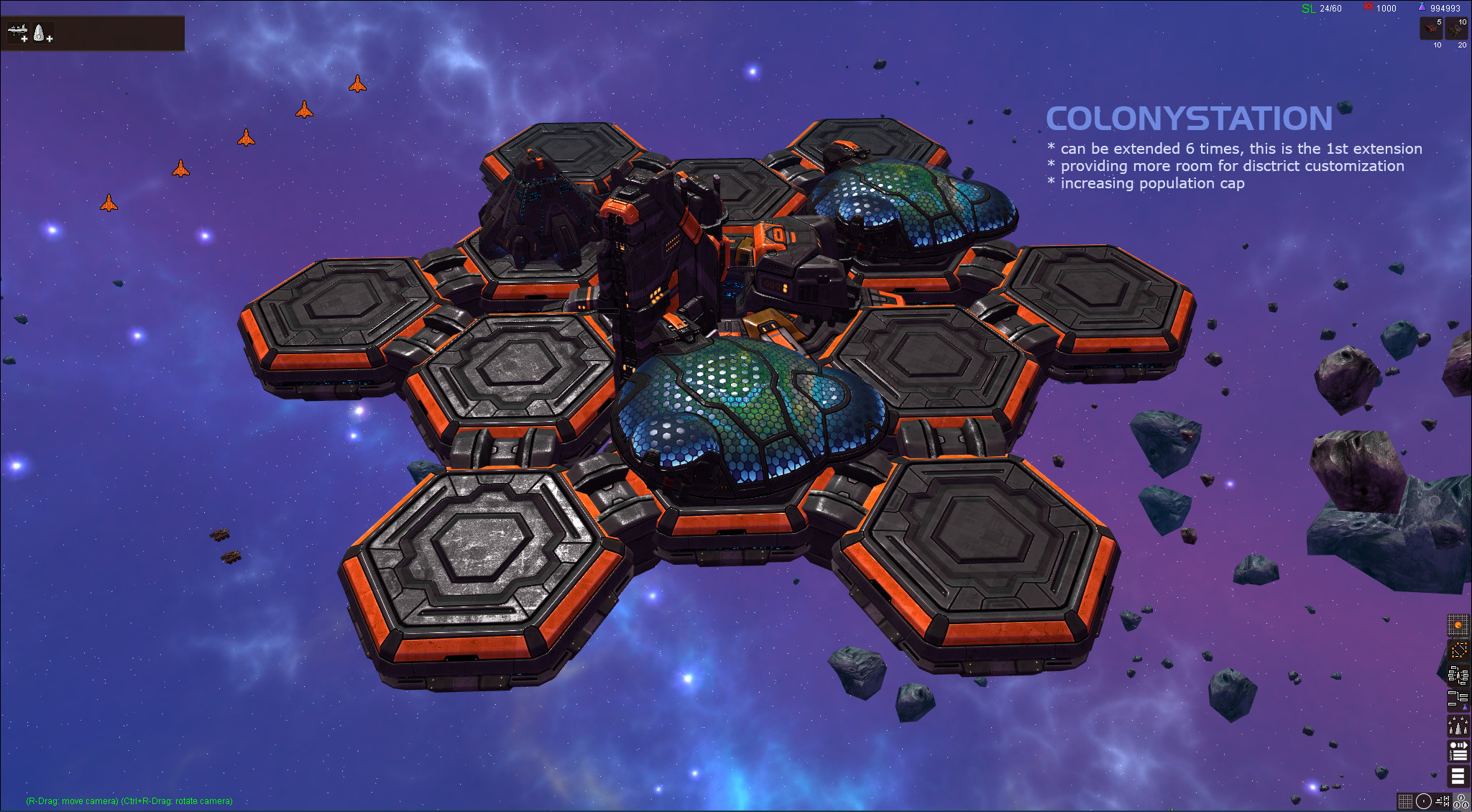 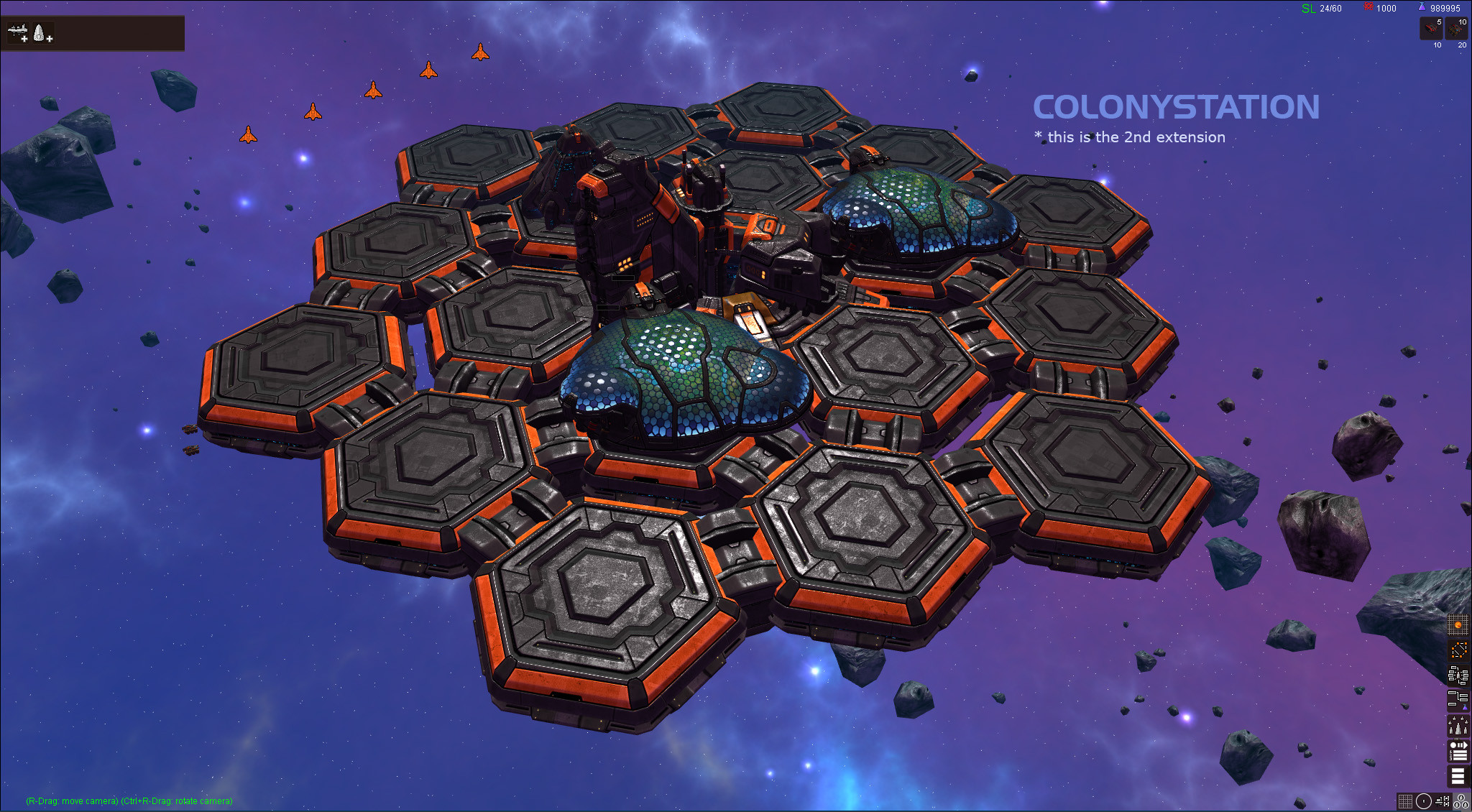 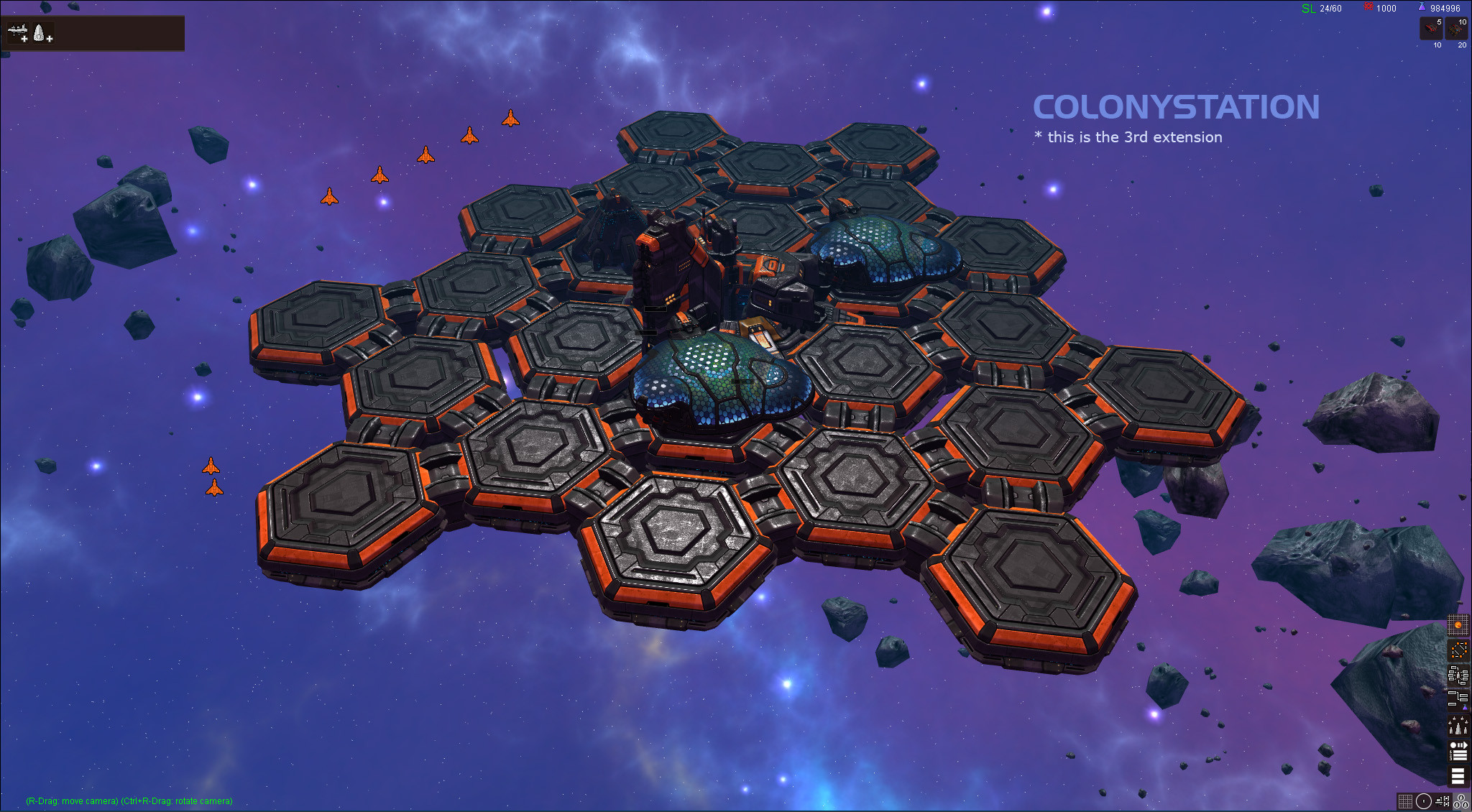 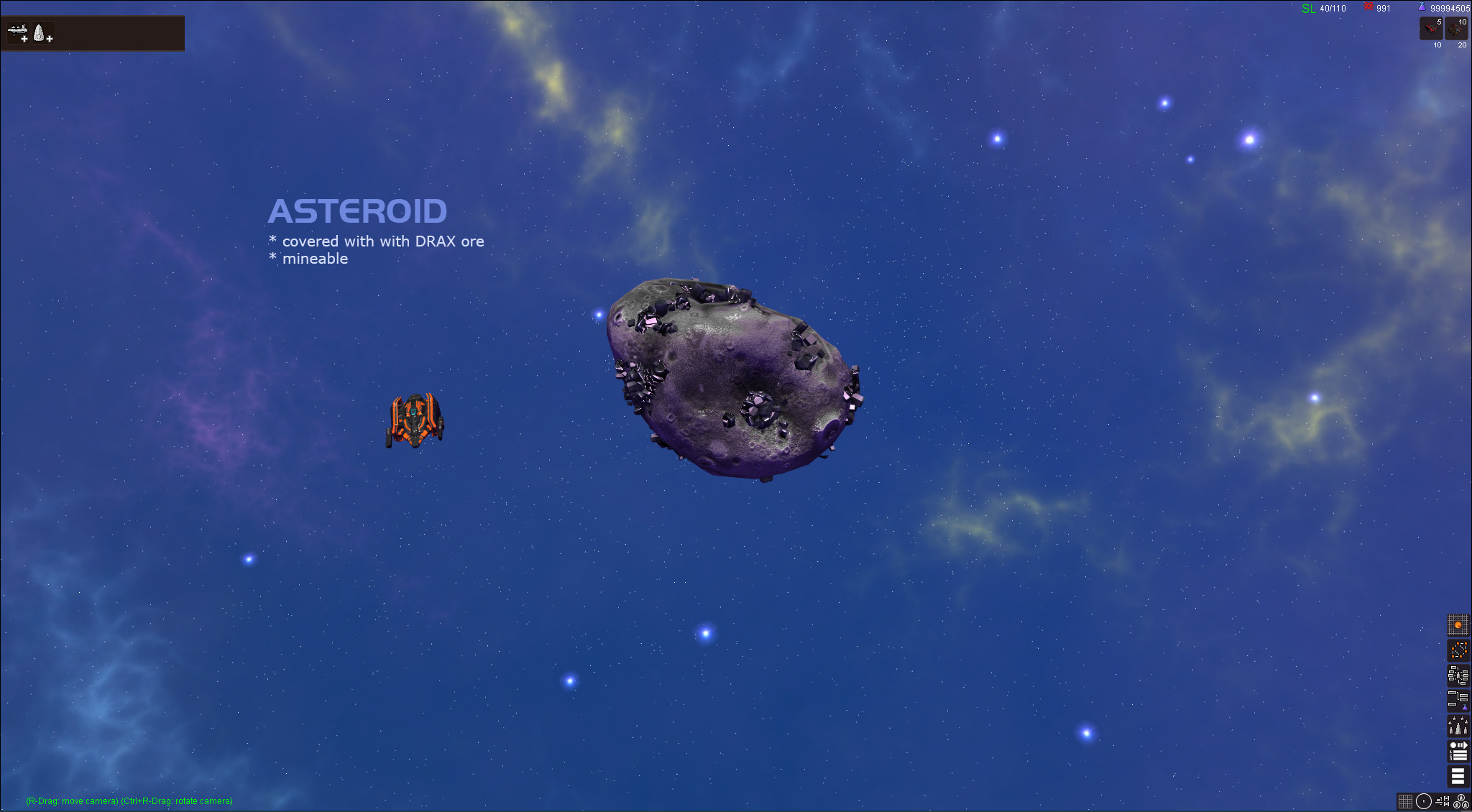 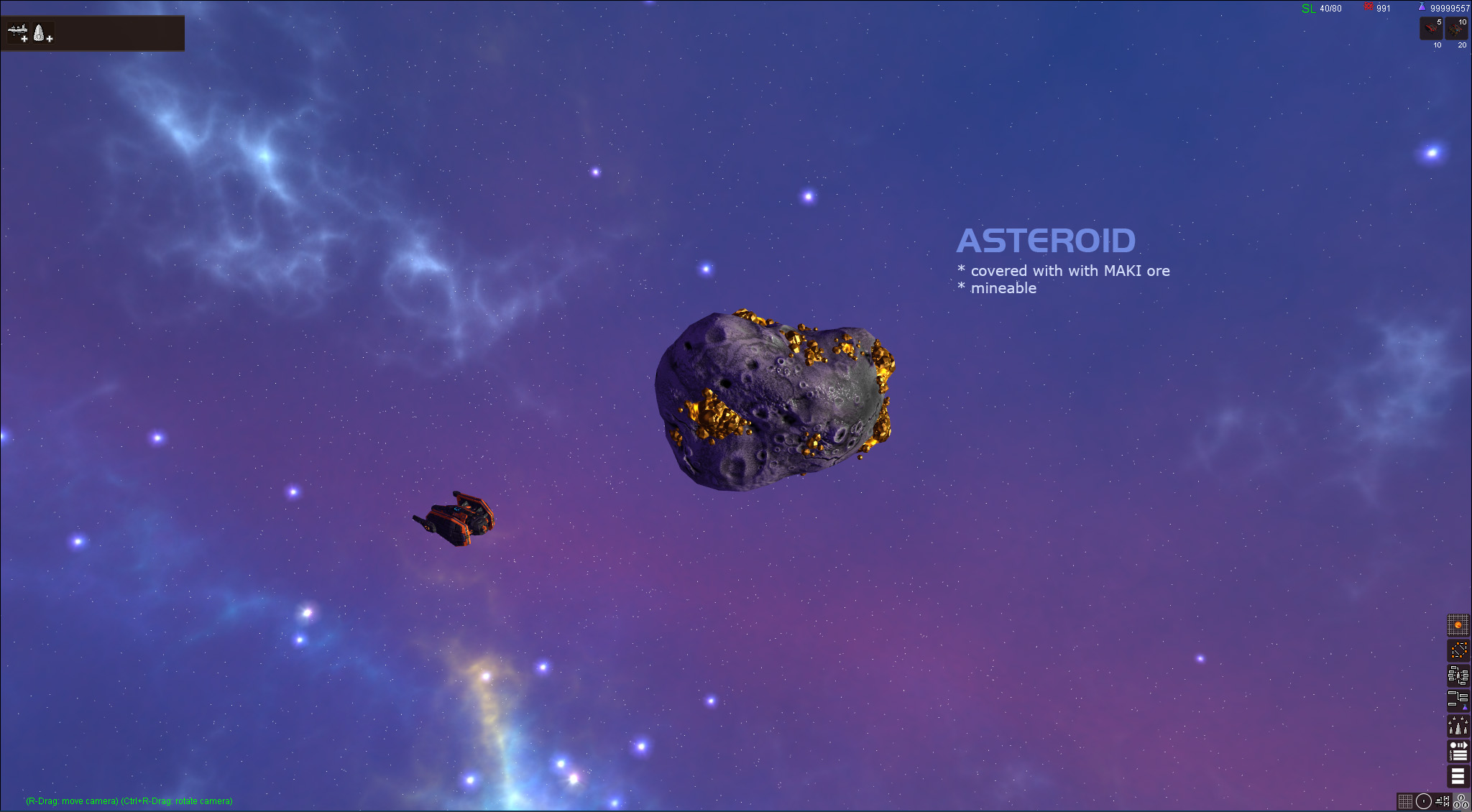 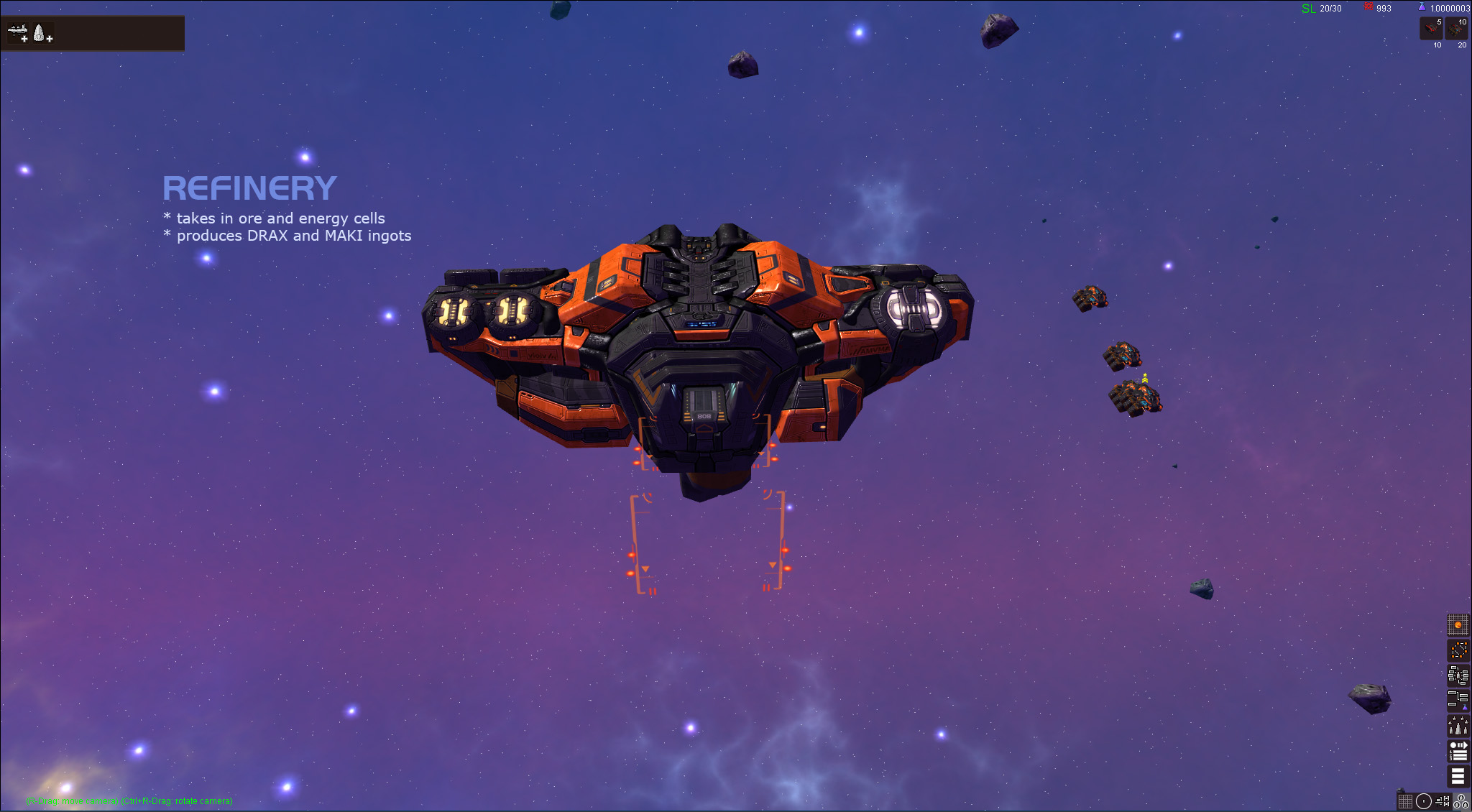 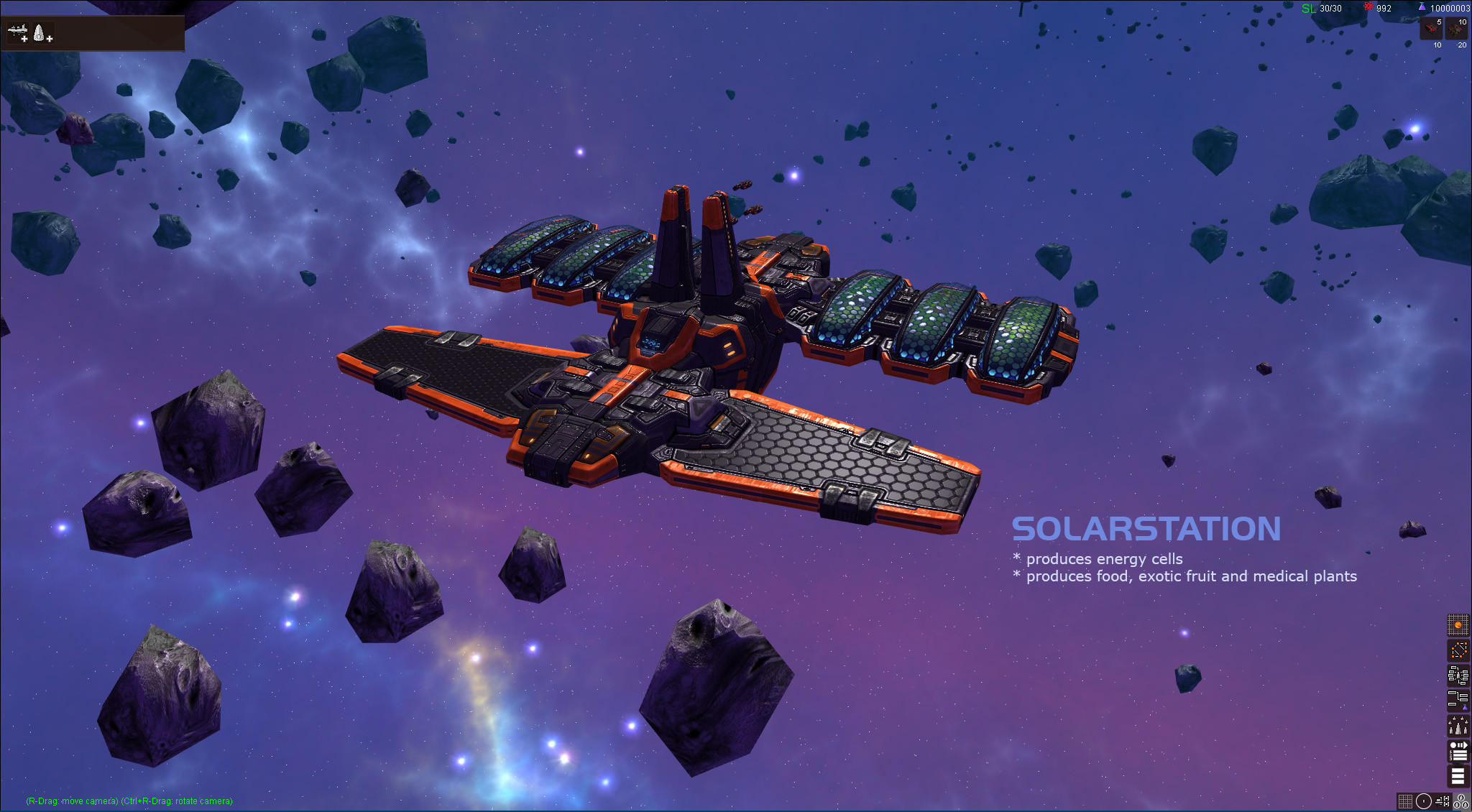 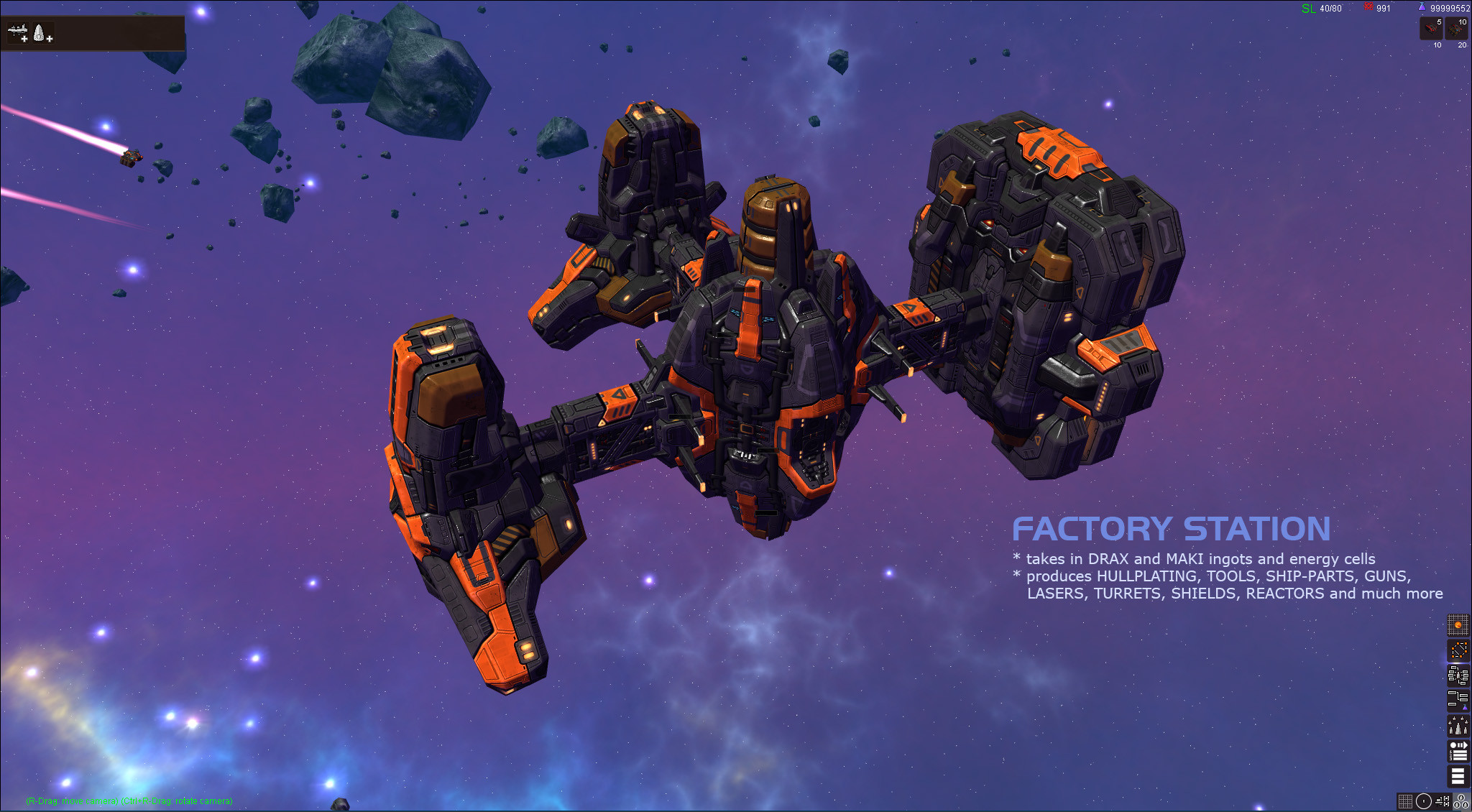 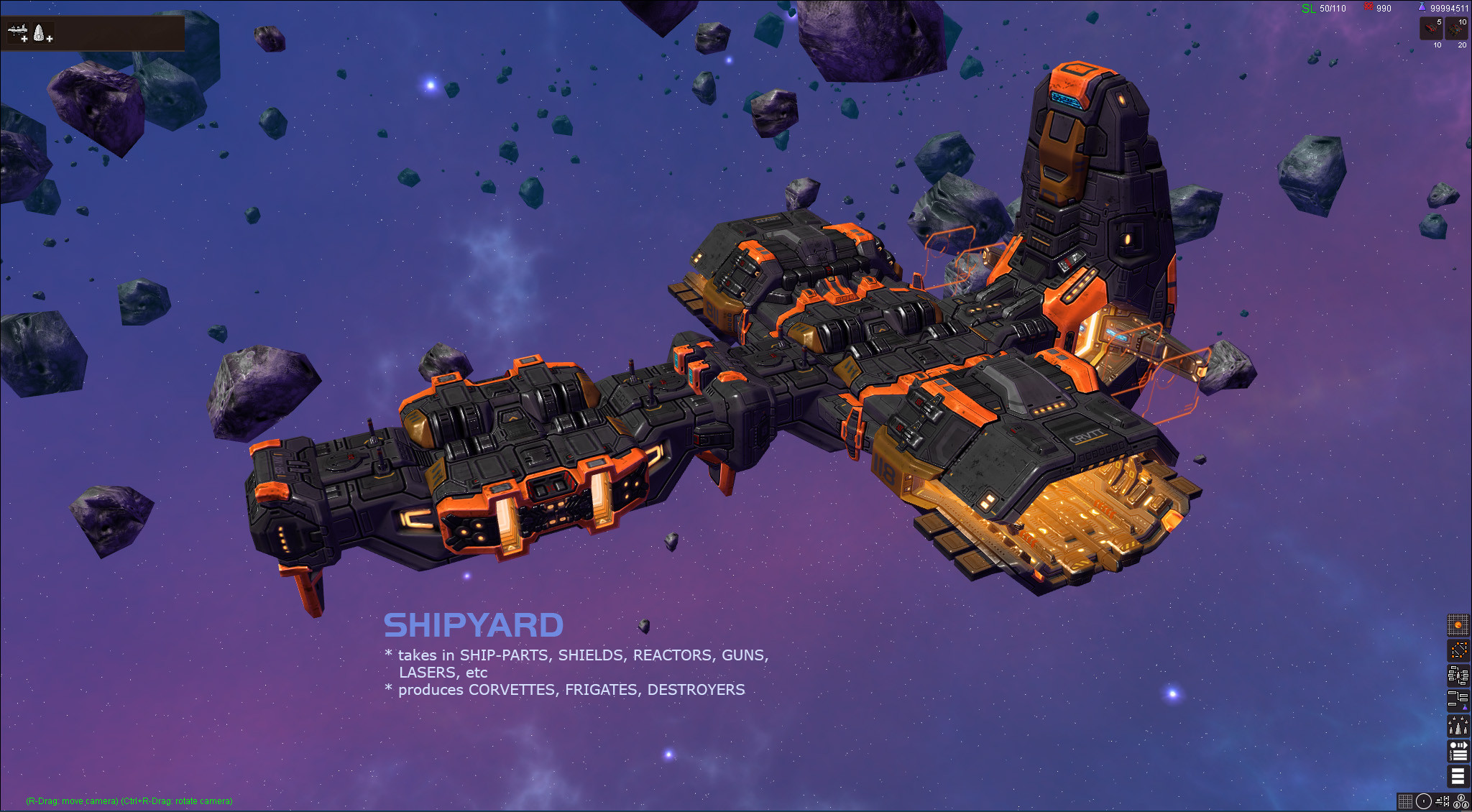 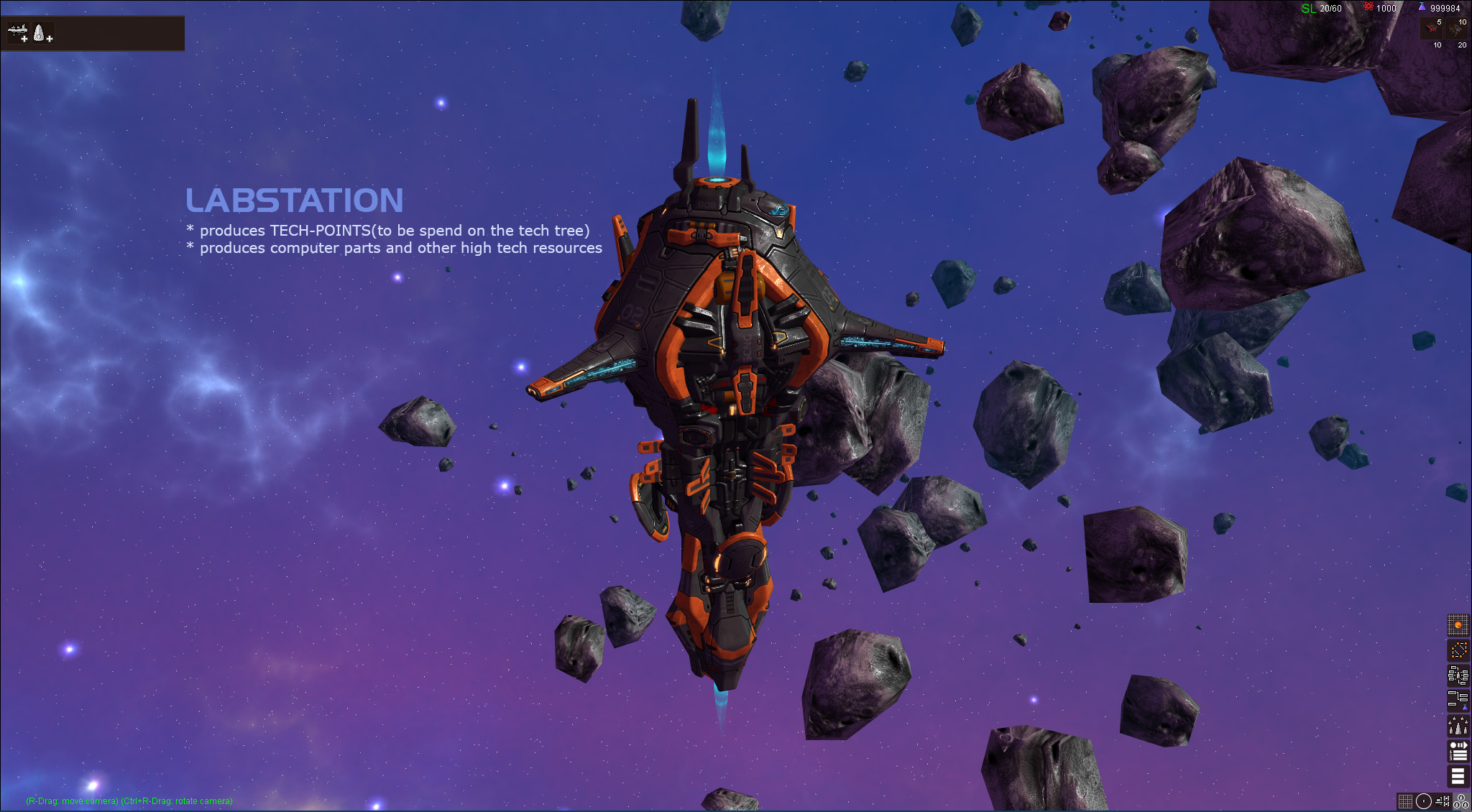 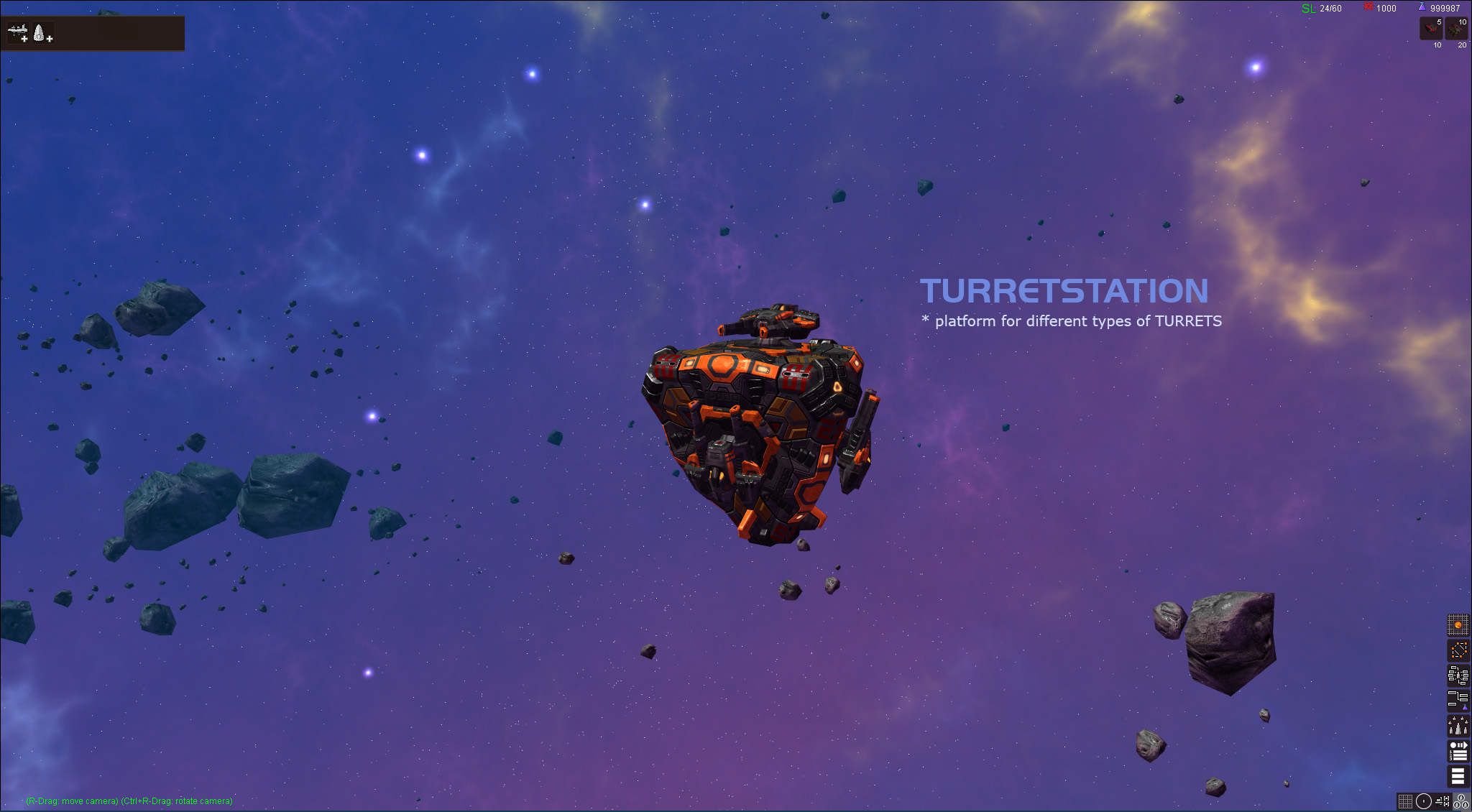 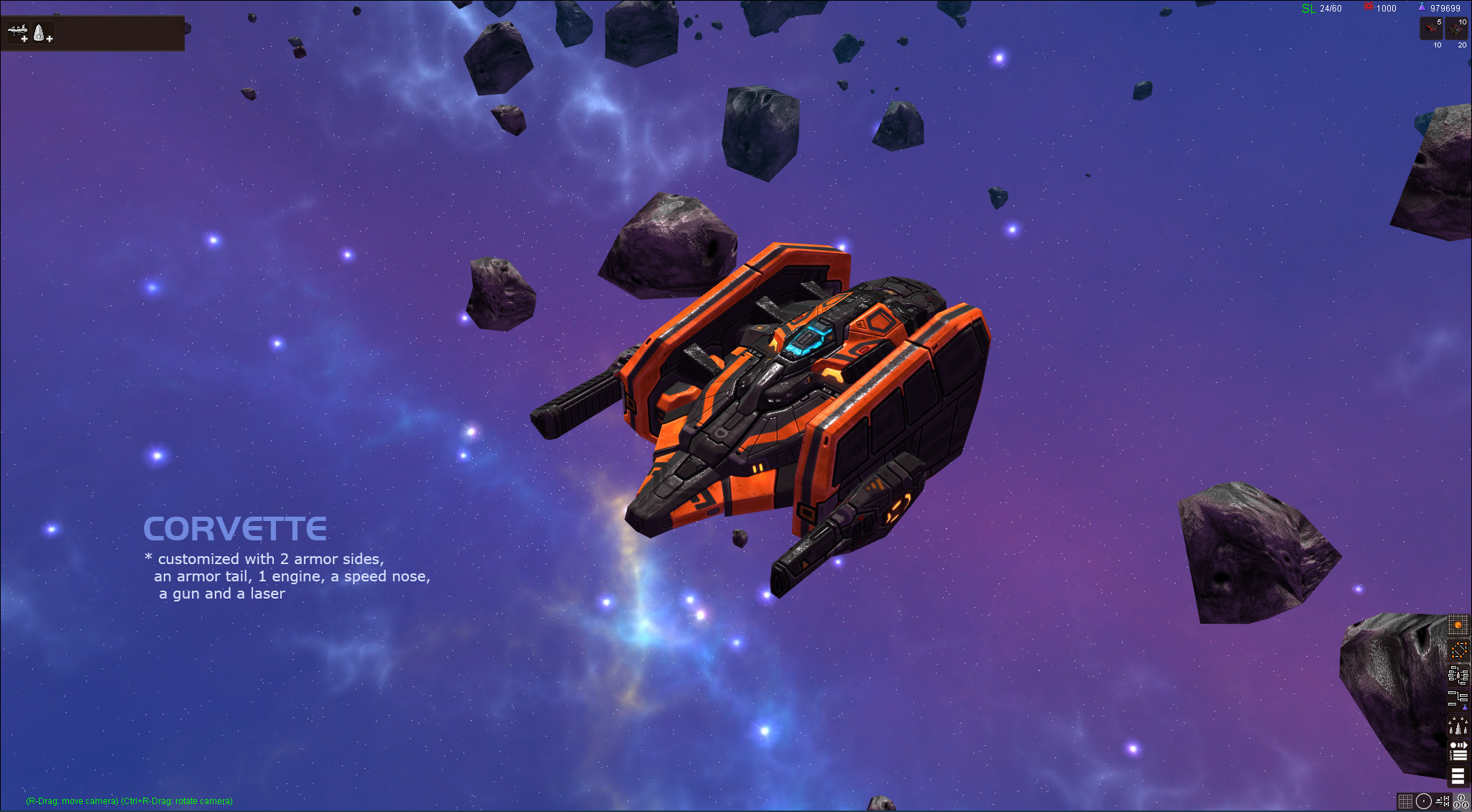 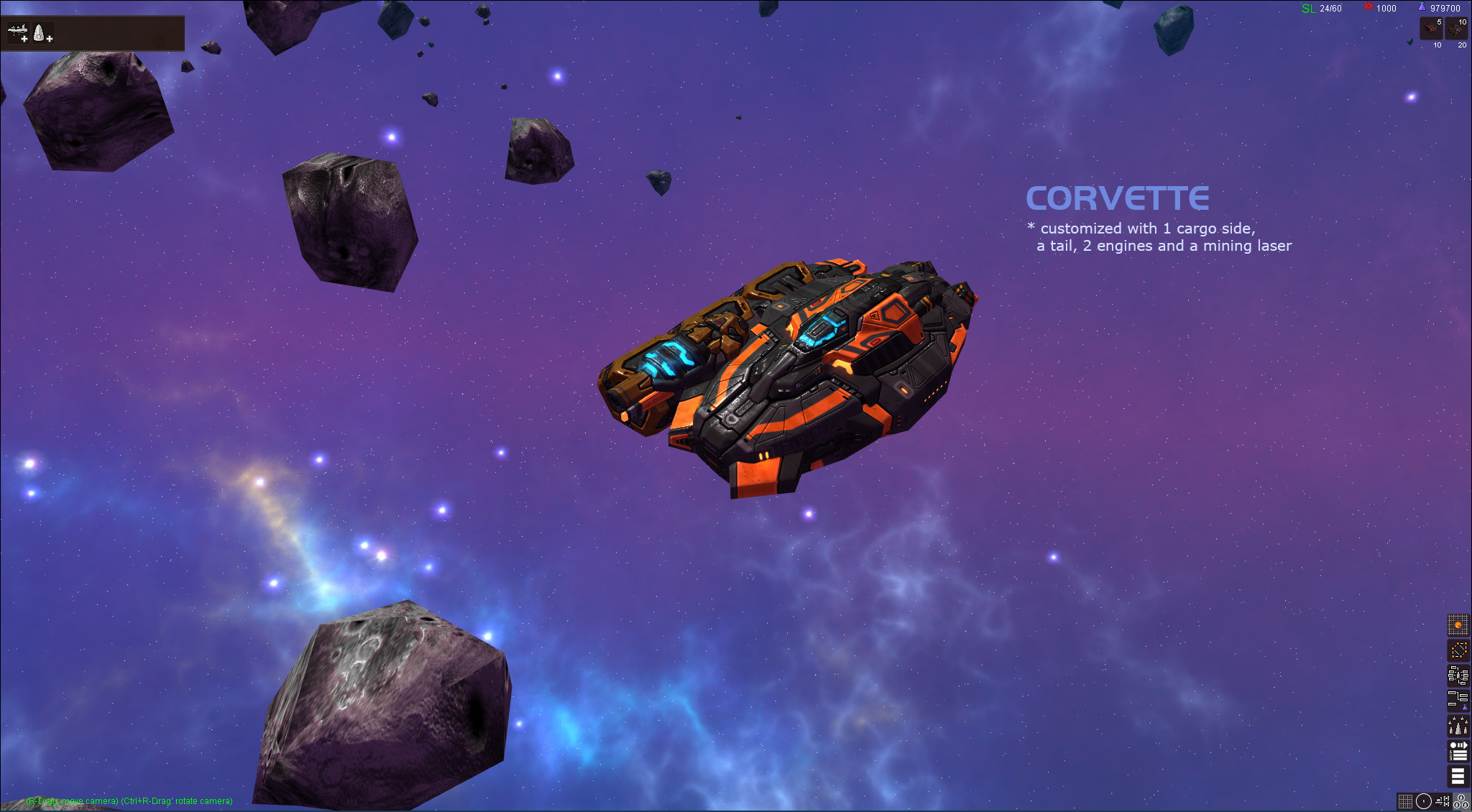 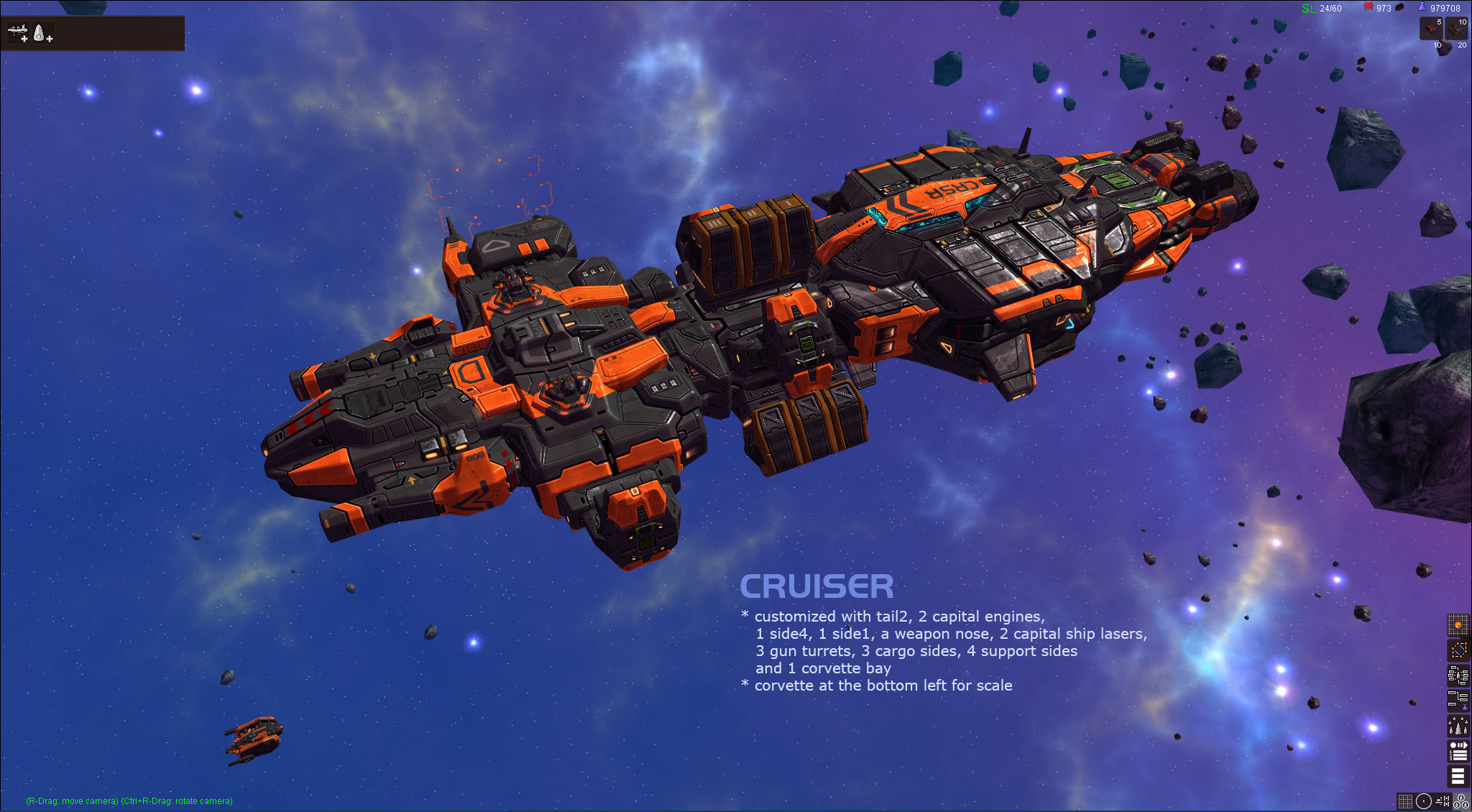 Let me know if you have any questions, comments or critique!

Awesome! but are there going to be fighters and bombers too? Maybe not only corvettes and cruisers but also other types of spaceships such as frigates destroyers dreadnaughts carriers...? will it be possible to add pieces not only in horizontal but in vertical too? So they more or less could have this shape:
S2.n4g.com
Fc03.deviantart.net

in case they are added, fighters and bombers will be customizable? It would be great if you could personalize your entire army, even the buildings (At least the turrets and defenses)BTW Great job! :D

Corvettes are your fighters or bombers, if you outfit them like this. They are roughly 30m in length and so not much bigger than modern fighter planes.

As listed in the resource tree, and mentioned in the screenshot, the shipyard DOES built corvettes, frigates and destroyers.

Cruisers are built directly in space, as are stations. Beyond cruisers, there are going to be carriers, battle cruisers, super carriers and dreadhnaughts. Here's an older article that covers ship classes and scale: Indiedb.com

Everything is customizable, corvettes, cruisers, stations, everything.
Customization is not free form, meaning you can't add parts as you like. Unless I'm creating a ship class that stacks vertically, you can't do that in the game. What you can do however create a mod/your own ship class. Technically it is most definitely possible.
I'd suggest you go through our screenshots to understand how cruiser customization works. You can also check out this old video about corvette customization: Youtube.com

Should be interesting to have direct control over most generated resources via station customization. I question the need for two different metal resources. It also seems like the lab station is tacked onto the resource tree. It's probably past the point of no return, but I would have combined the lab and colony stations into one.

Great comments! The colony station actually does produce some TPs on it's own, so you can explore the lower tiers of the tech tree initially. But ultimately your needs will outgrow what the colonystation can provide. This is where the labstation comes in. If you want to super charge your research add as many science lab modules(not yet shown) as you want.
Furthermore, the lab station will allow you to produce some high tech resources using a computer or bio lab module. There's a lot you will be able to do with the labstation, currently only the basics are in.

It's similar in that regard with the colonystation and the shipyard. Being able to produce units like the corvettes, takes a bit of development. However, there will be a unit one size smaller than corvettes, that can be produced at the colony station: drones. These will be customizable as well of course, so there's likely going to be attack drones, mining drones, repair drones, etc.

Especially in regards to content, nothing is past the point of return. If you want, you can even easily mod your colonystation to do the job of the labstation. Hell, you can make a ship do it.

Think about the two metals like a iron vs gold, a plain and more precious metal. There's actually a third and even more precious resource(as in, not found in your starting sector): Dss.stephanierct.com crystal.
Generally you can say you will need a higher ratio of Drax initially, but the further advanced you get, the more your needs shift to more precious resources.

This game is looking better and better as time goes on. I'd bet quite a sum of money you'll make the front page turntable when you release.

Sure, the engine doesn't limit you in any way. It just depends on how you(I) setup the assets. This is how the turret station is set up, notice the green helpers, they determine how a module/component attaches: Stephanierct.com

Also, asteroids and their resources are set up the same way by the way.

Most stations expand horizontally, because you will most likely control the game looking down and this way you will have the bset visibility of stations and their modules.

Oh yeah, I forgot about the turret station. Thank you.

This is such a good game.

Here's a few of questions I've come up with while perusing over the recourse tree:

First off will the solar station be upgradeable in size/performance to cater for the higher demands of a larger more populated colony station, or will the player be required to build additional solar stations to accommodate the needs of the population, or even so will there be some other means of dealing with this?

Secondly will you be only limited to building 1 of each resource station, and will the location to constructing stations play a vital role in the resource production chain?

Lastly I was curious about the long term setting of the game, will you always be needing to mine resources to keep your colony alive (to repair/build ships etc), or will there be more alternative means to combat this feature?

I am a tad unsure of exactly what kind of strategy game DSS will be. Persistent long-term 4x strategy, or more along the lines of a map-skirmish like Starcraft? Will there be a heavy focus on individual unit orders and tactics, or will it me more about designing a fleet with good synergy and letting it loose in the general vicinity of the enemy?

It's a mix of things.
You'll need to design/refit your ships to have the proper ratios of armor vs shield for defense and the proper ratios of kinetic vs energy weapons for offense. Kinetic weapons are countered though armor, where as energy weapons are countered by shields.
Assembling those ships in fleets will also offer certain benefits.
And then there's special ship abilities(through support modules) that come into play. The later is worked on as we speak.

There's going to be upgrades for most if not all stations, that will boost perfance, these can be unlocked through research. You can also build multiple stations of the same kind, no problem. Your general station cound is only limited by Station Logistic Points, which is a soft limit, determined by the level of development of your colonystation and which can be extended through research.
Furthermore, we currently only have one hub for each station. In future, there's going to be more. For instance, there could be a solar station hub that can hold 6 or 8 solar/farm panels instead of 4.

There will be alternate ways. There's a mater fabricator on our list among other things.

Thanks for following that up DSS-Mathias :)

I´m sorry if this question have already been ansvered somewhere, but
How is it with multiplayer? I guess you´re playing for some border colony of your faction(race). So in multiplayer I´ll can make aliances with any other colony I want, or every colony of the same race will cooperate in order to defeat other race? If the second variant is correct, will be there any faction homeworlds?

Yes, there's multiplayer, vial LAN or via Internet. You can ally with other players(which will be the same faction) and play cooperatively with them.
Homeworlds/planets are not planed for version 1.0.