Darktide is a tactical strategy RPG set in the fantasy world of Aeloria. Ally with a faction and recruit your clan from among the eight major races that inhabit the realm. Each one of your soldiers can be fully customized, and they have powerful abilities distinct to their class. Battle through the dynamic campaign from the perspective of either faction, with the story being different every time depending on your choices. Or you can take your army online to clash with enemies, vying to become the true champion. War is here. Are you ready?

Crafting the World of Aeloria: Part 2

In our last journey through Aeloria we talked about the different races that inhabit the world, and the conflicts that brought them together, which led to the creation of the two opposing factions. In this post I’d like to talk about the magical force known as the Mägi, as well as auralite, the rare crystals that have been infused with the power of the Mägi.

The Mägi. A powerful force in the world that is both a blessing, and a curse, to the citizens of Aeloria. Those who can wield it’s power are able to cause great destruction, by commanding the natural elements, or twisting the forces of life to cause disease and decay. There are also those who use these powers in a more positive way, for healing, protection, and even to revive.

It’s existance is found in the oldest of scholarly texts, but with great disparity in regard to the source of the Mägi, and how it came to be. 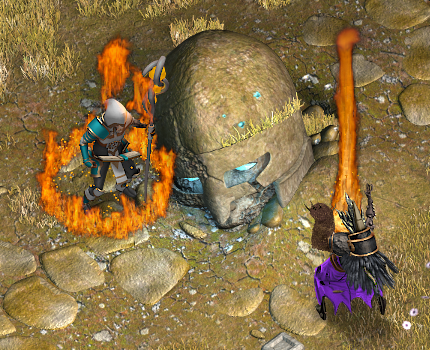 The Aduro believe the god Pyros provides them with dominion over the elements of fire and spirit. The high inquisitors have outlawed the study of the other facets of the Mägi, and those who practice them were banished.

Originally citizens of the Aduro nation, the Shade were exiled for practicing the dark art of necromancy, and refuting the word of Pyros.

During their exile the Shadowlords emerged from their ranks and began twisting the elemental and spirit components of the Mägi. This gave birth to the Lithos, a golem-like being infused with the power of the Mägi at their very core. At first the Shade believed they would be able to control these creatures, and lead them to destroy the Aduro, but over time this proved to be incorrect. 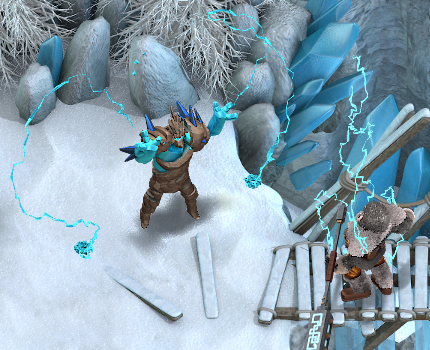 Carved from molten rock, the Lithos were extremely strong physically, and have the power of the Mägi coursing through them. They could rumble the earth, call upon lightning, and protect each other using brute force. It has also been rumoured that they are able to form creations with the building blocks of life, which is also how they are said to procreate.

Protruding from their bodies are fragments of auralite, rare crystals that have been infused with the power of the Mägi. Their hunger for more never ceases, and they assault the Dvergar mines to amass more of the precious resource.

Their raids have also targeted Dvergar towns and structures, including the capital Icewatch, the fortress where the clan elders rule from. Trade routes between the Aduro nation, once the safest and most travelled in Aeloria, are now plagued with hijackers, making auralite crystals much rarer. This has weakened both nations, and they now work together to battle the Lithos.

Hailing from the mountains the Dvergar are a strong people, who have mastered the magical elements of cold and ice. They believe their gods have commanded them to protect the eastern regions of the world, and keep auralite out of the hands of those who do evil. The aspect of fire was once reviled by the clans, but was eventually accepted, due to their partnership with the Aduro. 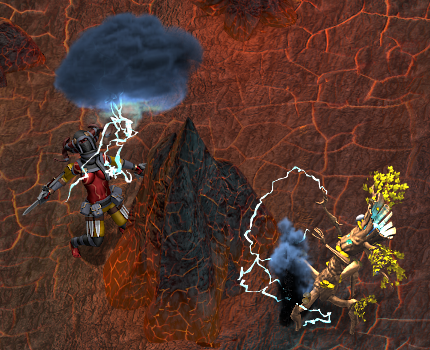 Tales were told of the Az’modai, the crimson beasts that come from the wastes of Bak’nael. Originally rumours, more and more stories were being told about strange humanoid creatures attacking Aduro towns, and carrying survivors off into the desert. Little did they know that they were not the only ones suffering.

They entered the forest in great numbers, bringing with them the destructive forces of many aspects of the Mägi. They were able to command the earth to rise, combust objects into flames, and poison and disease all living things. Not only were the eldritch and magus extremely skilled with the Mägi, but even the conquerors, who rely on physical strength in combat, were skilled in magic.

The Sylvan did not appreciate these beasts stepping foot on their sacred land and pushed back. They used the natural elements of the Mägi both offensively, and to shield and heal their smaller numbers. Unsatisfied with merely keeping the Az’modai out of their domain, they are attacking the heart of Bak’nael itself.

It is said that the Sylvan were most likely the original race in Aeloria, and also the most skilled in using the natural facets of the Mägi. Their abilities in regrowth and healing are unmatched, along with their command over the skies and the earth. It is even said that they are able to give life to a fallen ally by combining the spirit and elemental rings of the Mägi. 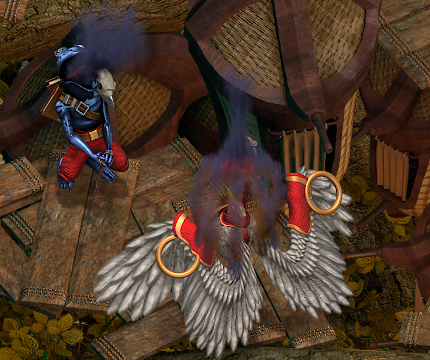 During this time the Caelum were desperately trying to stay alive, as the Reptilis were pushing them towards extinction. After decades of secretly raiding the Reptilis, for revenge and to push them further from their nests, they made a critical mistake in thinking they held the balance of power.

Specialized in the aspects of fire, ice, wind, and spirit, the avians wanted revenge against the reptiles who once drove them away from the eastern regions of the forest, and annihilated their numbers.

The Reptilis united, and with them came the Az’modai, as the Sylvan were sworn to protect the Caelum and the forest itself. Once incompetant with anything outside of the sphere of water, the Reptilis now brought death and plague magic in order to battle their enemies. Once thought to be a bizarre group of unintelligent reptilians, they now fought with great power, wanting to extend their territory beyond the swamps and eradicating the Caelum.

All races of Aeloria continue to study and research the aspects of the Mägi, and gathering auralite to make their own warriors stronger, while weakening their enemies. By infusing items such as weapons, armor, and relics with auralite crystals they are able to physically wield the power of the Mägi, giving even the common rogue or soldier much greater power over his foes.

Both factions have all aspects of the Mägi open to them, with the exception of natural life only available to Sylvans, and plague magic being used by the Reptilis. Although these restrictions are only in regard to abilities and casting, as all units are able to use any type of auralite available to them.

Players will receive auralite by defeating enemies and completing quests, and have a number of slots they can attune them to. Some examples would be the aspect of earth which raises a unit’s maximum health, or the aspect of air, which gives faster recovery and attack time. By attuning auralite you are able to customize units, so you could decide to add the aspect of death to your warlock to make him more powerful offensively, the aspect of earth to let him live longer, or a mix of many aspects to become well rounded.

Mixed with each unit’s skill tree, the auralite system gives you extreme customization on how unit’s will play on the battlefield. You might have multiple Lithos Brute’s in your army, with one built to tank and sustain damage, while the other is focused on melee damage and stuns. This not only adds an element of surprise, but gives you more tools to map out your strategy.

In my next posts I’ll be going over the units available to each race, and where their specialties lie. You could build your army strictly from a single race, or you can add units from your entire faction. Encompassing multiple races gives you a much wider skill set, but also weakens you in some areas, so there are many tradeoffs to be made in building your guild.

Crafting the World of Aeloria

During the development of Darktide we’ve gone through several iterations on the world of Aeloria and it’s inhabitants. So I wanted to take the time...

Over the last month we've focused on a few key areas and really polishing them up before we cut some video, and a ton of work has gone into scripting...

We've been making great progress towards our next pre-alpha build, which is the version we'll be using to showcase the game on both the Collective and...

A Change in Name & Colourful Decisions

Since our last update we’ve been steadily implementing features, iterating on game design, and making some really big changes based on the feedback...

Just found this, and it looks epic! Following and spreading!

Enticed and watching from across the pond. No, not Lake Ontario.

Yes i am ready!! Tracking!!

The Dungeon Beneath Turn Based Tactics