Hello, my name is Danny and im from Germany. Im 20 years old and im interested in programming and design for 5 years now. My skills are of course not the most impressiv but in the last month I try to improve them very hard.

While programming this game my knowledge is growing more and more and I've got a new idea every second.

At the moment the game is a basic prototyp with working physics. Here are some elements of the game:

The Player: The Player is a friendly alien who's on an adventure to find his spaceship, because it crashed somewhere on this strange planet.

The Movement: You can double jump, stomp your enemy's head and shoot a fireball.

The Enemys: At the moment there are two diffrent enemies, a snail and a spider. If you try to shoot the snail, she will cover under her shell, so you have to stomp her. The difference between them is the movement. The snail just patrol from left to right, like a goomba. But the spider hunt the player if he comes to close. The spider is also able to jump. (More enemies and futures are planed, but more in the "planed futures" section.) 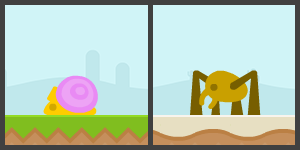 Level: There are three different settings: Grassland, Desert and Candyland.

Collectables: There are coins and keys which you can collect. You need different colored keys to open the same colored door. The coins are just for the points. But these two things you can see in the video.

More characters: You will be able to choose the character you want. All of them will have their own play-style. Like running faster, or jumping higher.

More enemies: There will be more enemies with smater AIs and unique styles.

Tons of levels: I am planing to creat more than 100 unique levels in diffrent environments.

Advanced mechanics & physics & Weapons: That is the most difficult part for me. I will add some new physics like bridges or ropes and ladders. Also I will include buttons which starts diffrent events or open gates or something like that. Weapons are also a planed future, like swords or bombs.

To promote Cuteventure and grow its popularity (top games), use the embed code provided on your homepage, blog, forums and elsewhere you desire. Or try our widget.

Shawy Adventures is a Retro Action Platformer. Help Shawy with his first adventure, recover the stolen sacred stones and became rich and famous. A prototype...

Build your own NES style Mario levels and play in them! Save levels and challenge friends to beat them, or just have fun going solo. *Custom Level Music...

For centuries, mankind has traveled the land to raid dungeons for riches and glory. This is not their story. You are Skully, an enchanted skeleton, living...

Sonic the Hedgehog 3D is a free fan game about a famous SEGA mascot, Sonic, and it is made on Build Engine with additional EDuke 32 port. The game was...