Europe is in turmoil. The lands are fragmented into petty fiefs and the Emperor struggles with the Pope. At this very moment the Pope has declared that those who go to liberate the Holy Land will be freed of all sins.

Gather prestige and piety and the world will whisper your name in awe. Will you co-opt other monarchs, and the Pope, under your leadership to liberate the Holy Land? Do you have what it takes to become a Crusader King?

Thanks for voting and helping Crusader Kings Complete on it's quest to become the 2021 Indie of the Year. You are now in with a chance to score some free games. Help this game secure more votes by embedding the widget (or link) we have included below on your favorite sites.

Spotlight: Mayor of the Palace Law

In the 6th and 7th centuries the Merovingian rulers of the Frankish realms, including Neustria (modern France), Austrasia (Middle Francia or Lotharingia), and Burgundy, began to appoint maiores palatii or maiores domus (English: Majordomo, Mayor of the Palace, or Mayor Palatine) from among the nobles to help administer the realm. 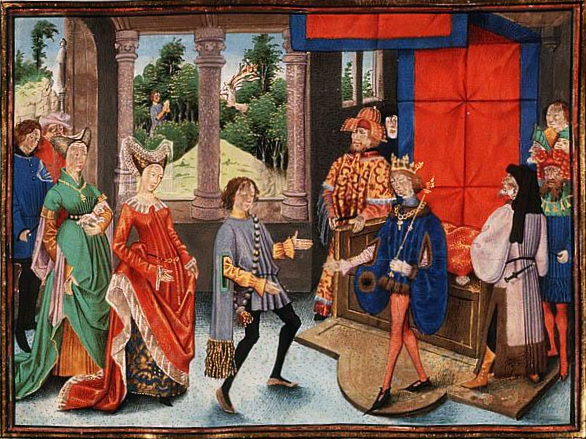 Pepin of Herstal, Mayor of the Palace and self-styled "Duke and Prince of the Franks," receives
allegiance from the nobility. He was the father of Charles Martel and grandfather of Pepin the Short.

At first just an advisory and administrative role, the Mayors of the Palace evolved into the true power behind the throne, so much so that the final century of Merovingian rulers are known as Rois fainéant, or "do-nothing kings." Kingdoms under the same king, but different mayors palatine, were often at war with each other under the command of the mayors. Eventually, the last mayor of the palace, the Pippind/Karling Pepin the Short, did away with the facade and totally usurped the title of King itself.

In keeping with this history, A.D. 633: Rise of Islam has added Mayor of the Palace laws, which, similar to revocation laws and centralization, are another set of realm laws that are enabled only for those of Frankish culture, or who claim descent from Merovingian Blood. 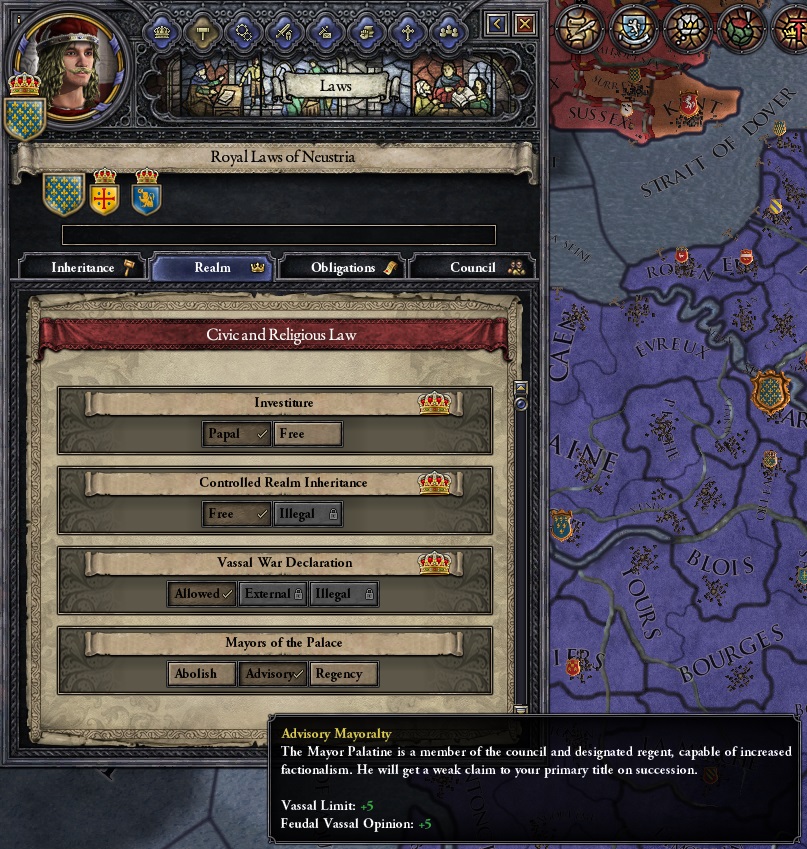 The three levels of mayoralty law

There are three levels of Mayor of the Palace law: 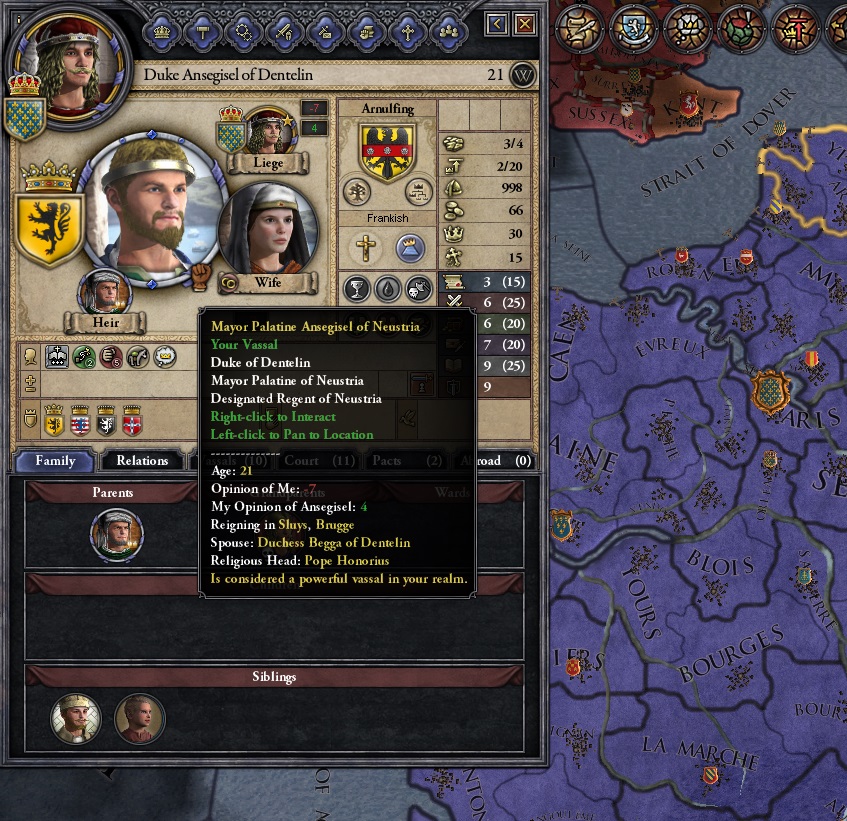 Example of a Mayor Palatine. As a council member, the powerful vassal is satisfied.
Also, the Mayor Palatine title supersedes any landed titles in the form of address.

To raise the stakes of Council Power factions and wars, Mayors of the Palace law will be increased by one level in the event of a Council victory. However, if you have the misfortune of getting Mayoral Regency, all is not lost. A new plot will appear through which you'll have the chance to reclaim your power, as long as there are enough backers, which shouldn't be too difficult with the big opinion boost you get in a Mayoral Regency.

All in all, it's a neat bit of historical flavor that will be a nice gameplay variation for Frankish or Meroving players.

Look for this and other cool features coming soon in the latest update of the A.D. 633: Rise of Islam mod for Crusader Kings II.

Active and talented modders are wanted to join the Ancient Kings Dev Team!

Europe is in turmoil, and the lands are fragmented. Can you become a Crusader King?

Playable africa, siberia etc. Extends some provinces, does not add new ones! Make a copy for the provinces.bmp file. And replace it in the game's main...

Non tested in long game, so probably can be unbalanced

This contains an expansion as well thats why it costs more

more then on steam?

Well, it contains the expansion on steam as well.

Ouch... Vonys is right it's basically twice the price. :/ Great awesome game though! Hours just melt into it. (Given that it's your type of game)

Because Steam users aren't stupid.
I've only got desura for project zombid, because the development team are **** and can't go on Steam like good games.

You know what other game isn't on Steam? Minecraft. Just sayin'.

Also, have you noticed that NO alphafunded games are on Steam? That doesn't mean Project Zomboid "isn't good enough" to be on Steam in the future. It just means that, if anything, Desura is more developer-friendly than Steam.

One more thing. Calling someone a *** is the best way to advertise an ignorant, knee-jerk opinion.

So basically you're a) implying Desura users are stupid, b) saying all games that aren't on Steam are "bad games", and c) insulting the Indie Stone crew who made Project Zomboid because they are alphafunding here...?

I see no reason not to bury your ridiculous comment.

Im with this guy on this. Mount and Blade series is a great quest line (unless you cheat), and there are a variety of endings for the game but wait. There is no ending because the AI never die. Love that game. And it is on Desura. Not to mention Amnesia: The Dark Descent.

It's also $19.99 on GamersGate. Do they have some sort of deal with Steam?