We went ahead and started with a major goal of our next milestone: the circuit menu (formerly known as the talent tree). On top of that, we have a lot of graphical improvements, sound and music!

First, in case you are confused: we decided to rename our Weekly Update into CrossCode Update because of the lack of an actual weekly schedule.
But don't worry: This doesn't mean we'll post updates whenever we feel like it. The bi-weekly schedule seems to work out fine so far, so we'll stick with it.

Anyway! What's in for this update? Lots of stuff, in fact! We went ahead and started with a major goal of our next milestone: the circuit menu (formerly known as the talent tree). On top of that, we have a lot of graphical improvements, sound and music!

We talked about the talent system in CrossCode before.
First big change: we renamed it to Circuit Menu. Has a more futuristic sound to it, right?

We started with planning out the layout and control patterns of the circuit menu. We all had very similar ideas, so we found an agreement very quickly.
However, before starting with the implementation, I first wanted to integrate several optimizations in our GUI systems. Those were very similar to the optimizations we had for the entities and the collision engine as mentioned in this update... and they worked again! And for all of you who are still waiting for a more detailed article about these optimizations: we did not forget it and will post it let's say... sometime in February!

With these optimizations done, the next step was to create graphics for the interface. I finished this just about yesterday. And here comes a first mock-up for our new circuit menu!

Let's start with the overview: 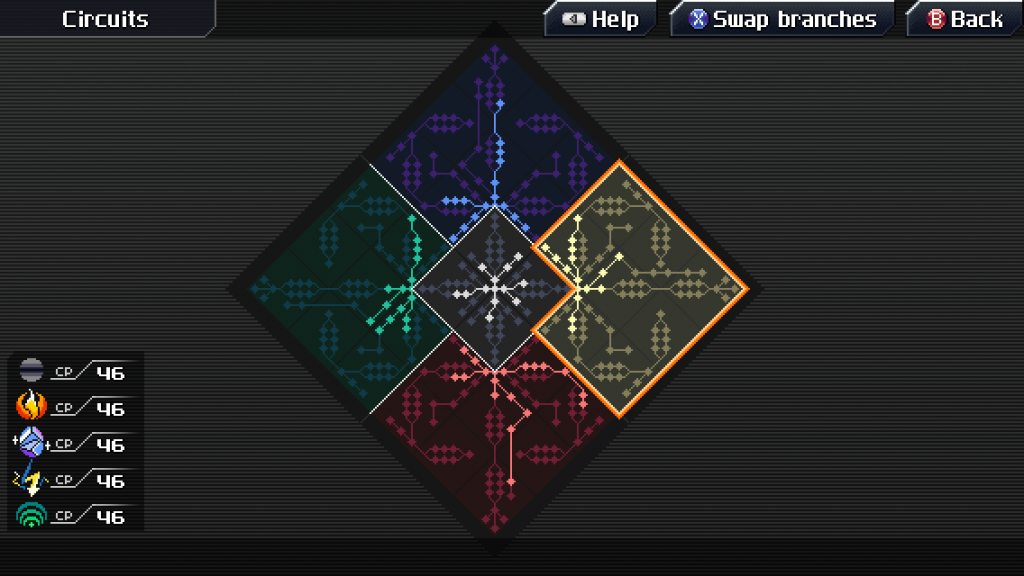 Here the player can select one of the five circuits for further inspection (neutral in the center and clockwise around it: cold, shock, heat and wave). On the lower left you see available CP (Circuit Points) for each circuit. Those are used to activate the nodes (i.e. learn the skills) of each circuit. Note how activated nodes are already highlighted in the circuit overview! (That will be fun to implement. Good thing I won't have to do it, right R.D.? :P). As for the "swap branches" option... we'll probably talk about that in another update.

Now let's zoom in into one of the circuits: 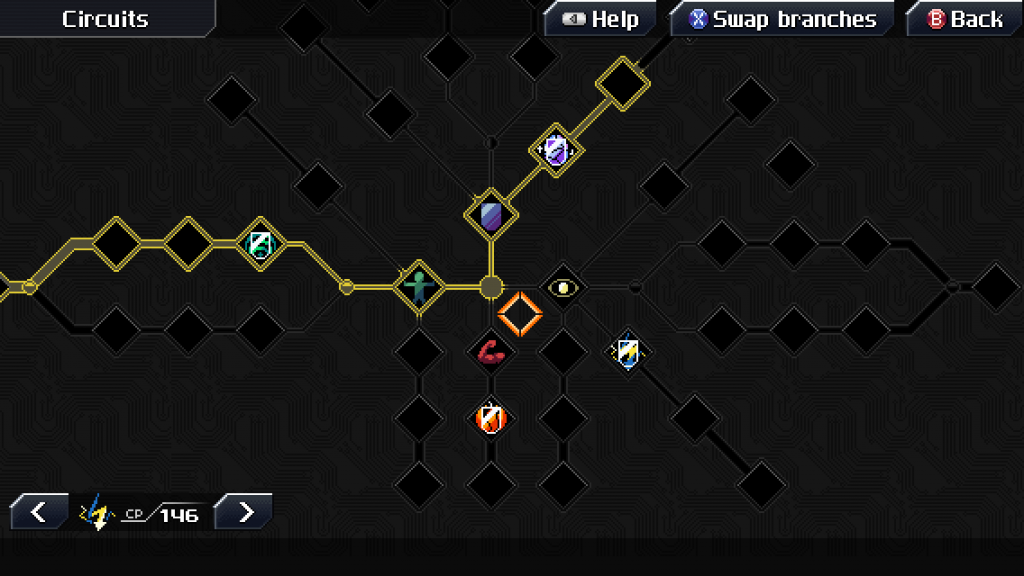 First what is missing: Icons are obviously incomplete. Even the existing icons might change (in fact GFluegel is already working on that). Also, the whole tree structure is more for graphical testing. That being said, we like how the result turned out, with that circuit pattern in the background and all.

Finally, here is how you can interact with a circuit node: 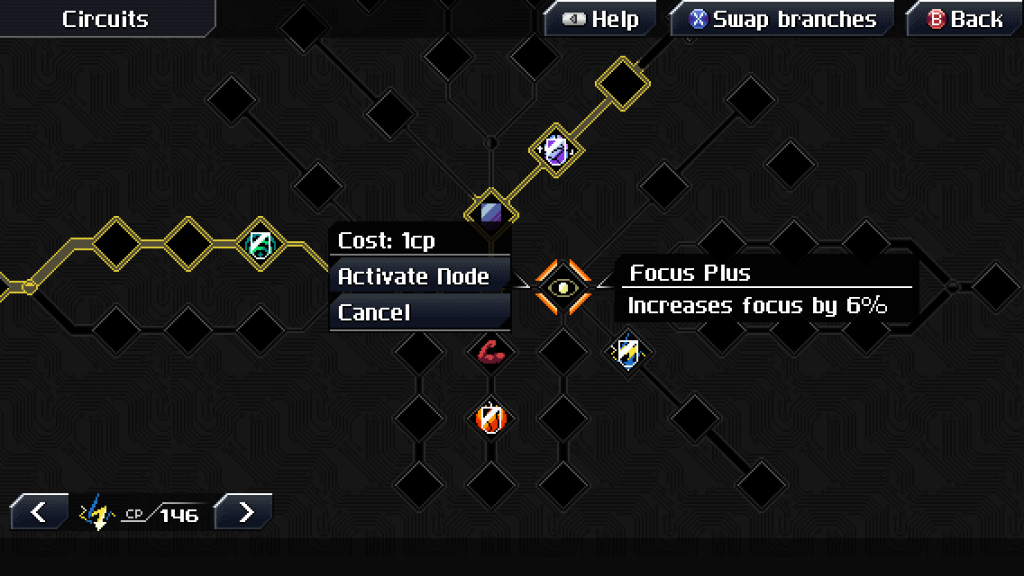 The description will most likely appear whenever you hover a node with the cursor. Once you click it you can choose an option on how to interact with it. It's more or less what you'd expect.

With all the graphics prepared, it's now up to R.D. to implement the menu.

T-Free was working pretty hard since the start of this year. He completed all the effects for the cold element mode. You could see some of the effects already in our Recap 2013 video.
Anyway, have a gif:

In addition, T-Free also added some nice wave animations for the cargo ship:

On another end, TQ and R.D. further improved the cabins environment of the cargo ship: 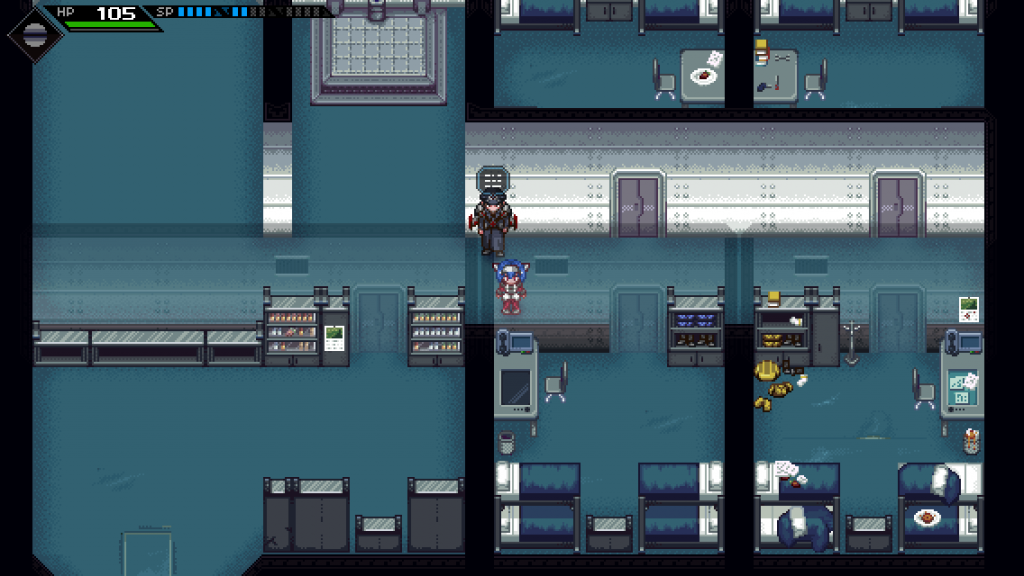 Seriously, look at all those details!

On the sound side, we have Teflo who recently contributed new menu sounds, e.g. for the equipment menu. Even though we're still fine-tuning these sounds, they already help to make the equipment of items a much more satisfying experience.

Finally, our composer Intero continued working on the BGM for the outside of the cargo ship. He already created an initial version, which matches the mood perfectly! Maybe we'll release another preview in a following update. :D

And... that's all for this update! Overall, it's a fairly good start for this year - especially considering we had to struggle with several study-related deadlines during the past weeks.

Otherwise, you can look forward to another technical article about our menu system that we'll post during the next two weeks.
Until then!

Wow, amazing detail on the ship interiors. Great job!
I'm glad someone out there loves going the extra-mile.