Crea is an easily moddable, 2D sandbox game with a lighthearted mood, colorful art and RPG elements. Drawing on the pioneers of the sandbox genre such as Minecraft and Terraria, Crea features combat and crafting in attractive, randomly-generated worlds for you to explore, tear apart and build back up in your own design.

Bring life to your worlds in Crea a whole new way - mannequins! Craft various outfits to adorn your mannequins and watch them come to life as NPCs.

This was a good week! We’re moving right along for the next major update, which will be massive. Over the last week we’ve been focusing on implementing NPCs – finally. Anyone that has been following Crea since our Kickstarter knows that things are constantly evolving and sometimes changing completely. Well, NPCs are no exception to this and we’ve completely redesigned how they work.

In the past, gaining access to new NPCs would involve triggering an event in the world. Once available, managing NPCs would be done through a complex system. After a great deal of redesigning Aaron and I came up with something fresh and simple.

Occasionally players will find a scarce material known as Remna Core. Using this, special NPC outfits can be crafted and once an outfit is placed onto a mannequin, it comes to life.

For this next update we are introducing the four NPCs: Merchant, Scavenger, Researcher and Healer.

Merchant – As you would expect, this NPC buys and sells goods. The merchant has a regular supply of wares that are replenished everyday as well as daily specials. 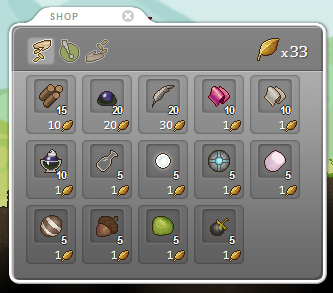 Scavenger – Don’t leave items laying around for too long! The scavenger will pick up and sell any items left dropped on the ground after a day. Keep in mind though that he must throw out the old to make room for the new.

Researcher – Occasionally players will find recipe scrolls, which hold the secrets to crafting unique items. However, they must be translated by the researcher and he does not work for free!

Healer – Well, she heals you. We’re also considering having her provide a buff or something along those lines.

We have at least a few more NPCs planned: Grafter, Cartographer, and Dungeoneer. We’ll be introducing them over the next several updates.

The NPCs wont move around but you can choose where to place them and if you ever want to move them then just punch them a few times! (Use the collect skill). Do not try this at home, kids.

I’m really happy to have NPCs finally in Crea. We are now moving onto adding new equipment.
Fortunately this should be fairly quick and we’ll swiftly move onto adding some new monsters in.

Friendly reminder that we are on Steam Greenlight. Please take a moment to vote for us.

Wow, the environmental, character and UI art all look well polished! Keep up the good work