Cosmoteer is a starship design, simulation, and battle game. Design a fleet of ships by laying out individual rooms and corridors, including cannons, lasers, shields, and thrusters. Battle other starships to earn bounties and use that money to expand your own ship. A dynamic crew and combat simulation makes every design decision important and interesting.

Posted by walternaterealities on Jan 24th, 2018

Until now, to play multiplayer with someone else you had to either be on the same Local Area Network as them, or send them your I.P. address and have them join your game. This made playing with other people online problematic because the host had to first setup port forwarding on their router (which can be a little complicated for someone who hasn't done it before) and then send everyone else their I.P. address (which can be potentially risky).

But now 0.13.4 adds "online multiplayer", which allows players to play with others online without having to share their I.P. addresses or setup port forwarding. This works thanks to what's called the "Cosmoteer Lobby Server" (or CosmoServer for short), which is a little program that players can connect to and join an online "lobby" where they can then host games and play with anyone else in that lobby, just as if they were on the same LAN. There's currently one official server called "Official U.S. East" (located in New York, NY, USA), but you can also run your own server if you want. 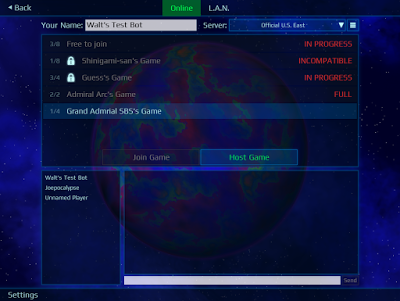 Unlike the servers for most other games, CosmoServer does not actually run any gameplay logic; it merely acts as a communication relay between all the connected players, letting the players themselves run the gameplay logic. The advantages of this approach are that it uses far less CPU than a conventional game server, and even more importantly, it is fully compatible with all mods. (Individual players playing games together must still have the same mods, but those mods do not need to be installed on the server.) The primary disadvantage is that it increases latency (not a huge deal in an RTS-style game like Cosmoteer). And if you know anything about multiplayer game programming, you may think that not running gameplay logic on the server would expose the game to cheating, but this is actually not true thanks to its deterministic lock-step multiplayer implementation.

Cosmoteer is a game about building pretty much any kind of starship you want, from tiny fighters to huge motherships or anywhere in between. This is great for player creativity, but it turns out to be really hard to design gameplay mechanics that work well for ships of any size. In fact, the single biggest challenge when designing Cosmoteer is figuring out how to deal with the sheer differences in scale between ships.

One of the ways in which scale can be a prickly challenge is when choosing the "range" for each weapon (how far it can shoot). The goal is to pick a range that is close enough so that two ships fighting can both be seen on the screen at the same time (without zooming so far out that you can't tell what's going on) while not so close that it feels like the ships are sumo-wrestling. The big problem here is that the ideal range for small ships is much closer than the ideal range for large ships.

Until now, Cosmoteer has leaned towards picking weapon ranges that are ideal for small ships because that made the game more understandable for new players, but that of course meant that large ships would tend to fight more closely than felt comfortable or intuitive.

But the 0.13.4 update changes that in a way that makes combat between large ships happen at a more ideal range, while still keeping combat between small ships relatively close. This change has two parts:

Better Ship Flight A.I.
The last change I want to mention in this post is that the flight A.I. for ships has been improved in several different ways that when combine together should make ships less "dumb" and annoying: