Condense- a game about collecting mass

"Condense" is a casual and beautiful arcade game about collecting mass, as the title suggests. Starting out at small point in space on the atomic level, the player must fight to keep their character alive, in the process growing their character to galactic sizes. The “Condense” feature is the main point of the game; once a player has collected a certain amount of mass, they must condense it in order to grow to the next stage. The game’s design, from visuals to sounds, features a unique look and feel that allows detail and complexity in its graphics while still feeling fairly simple and minimalistic. The game is dark and reminiscent of space, which contributes to its atmospheric, ambient, and lonely feel. Along with this, it features an intriguing 16 song soundtrack which is both dark and surprisingly calming. “Condense” brings something fresh to the evolution category of games.

Condense was featured as a Kickstarter "Staff Pick," was funded in August of this year, and showcased at the St. Louis PixelPop game event. The game is nearly done, releasing in both computer and mobile formats on November 20th.

To see more about the game, visit www.valenceone.com

Our successful Kickstarter campaign can be found here.

In the game, you play as a rare type of element which must consume mass constantly in order to survive. Against enemies and a time limit, you must fight to collect other objects and grow in size. At a certain size, growth is no longer possible. At this point the player chooses to "Condense" all of their mass, and become a bigger object. This condensing of mass is a central idea to the game. 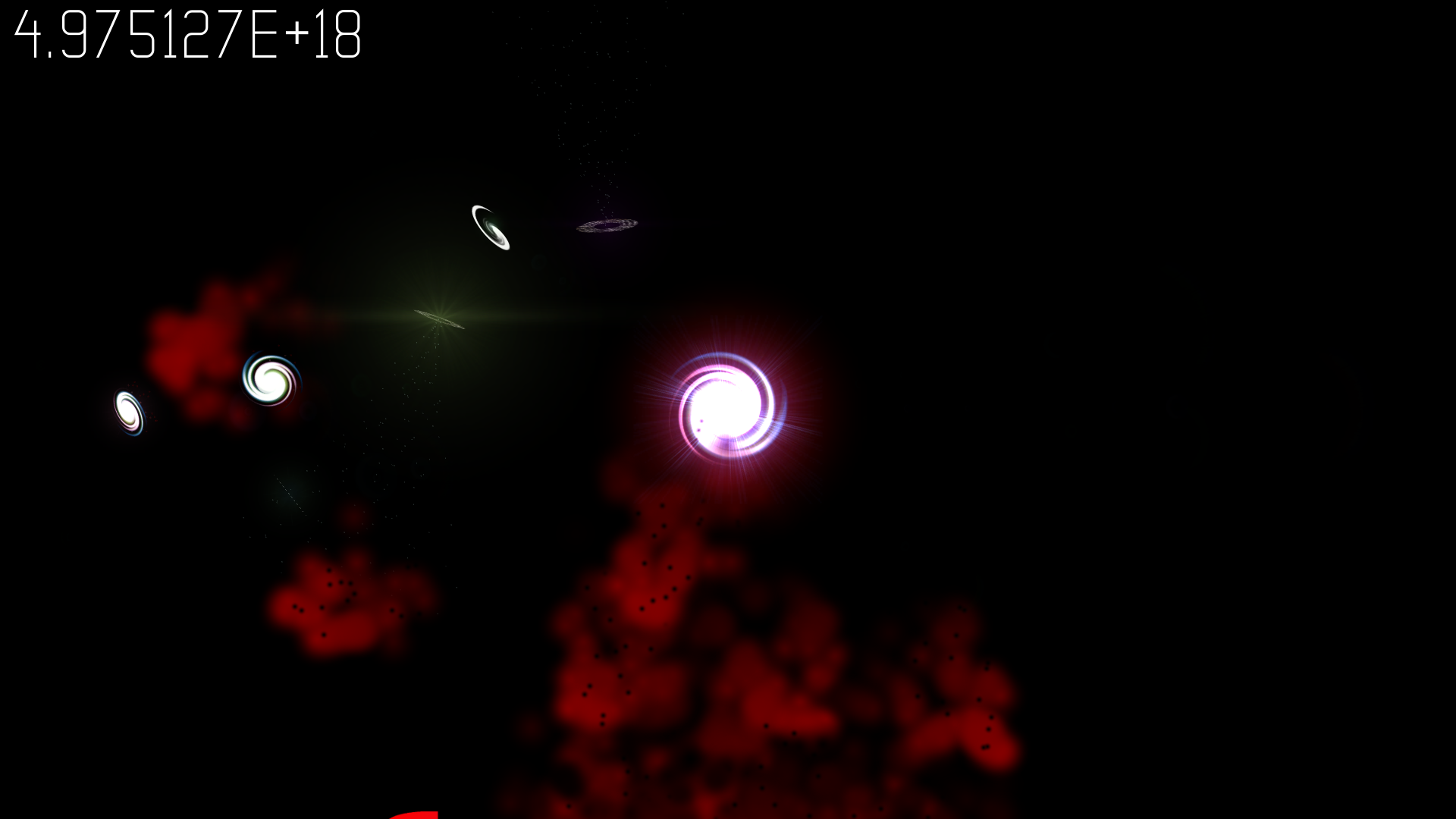 The player starts out as an atom, but gradually will be able to evolve into other, larger, objects, such as a stone, an asteroid, a planet, a solar system, a nebula, a black hole, and eventually even a galaxy, traversing the universe, while consuming other galaxies. 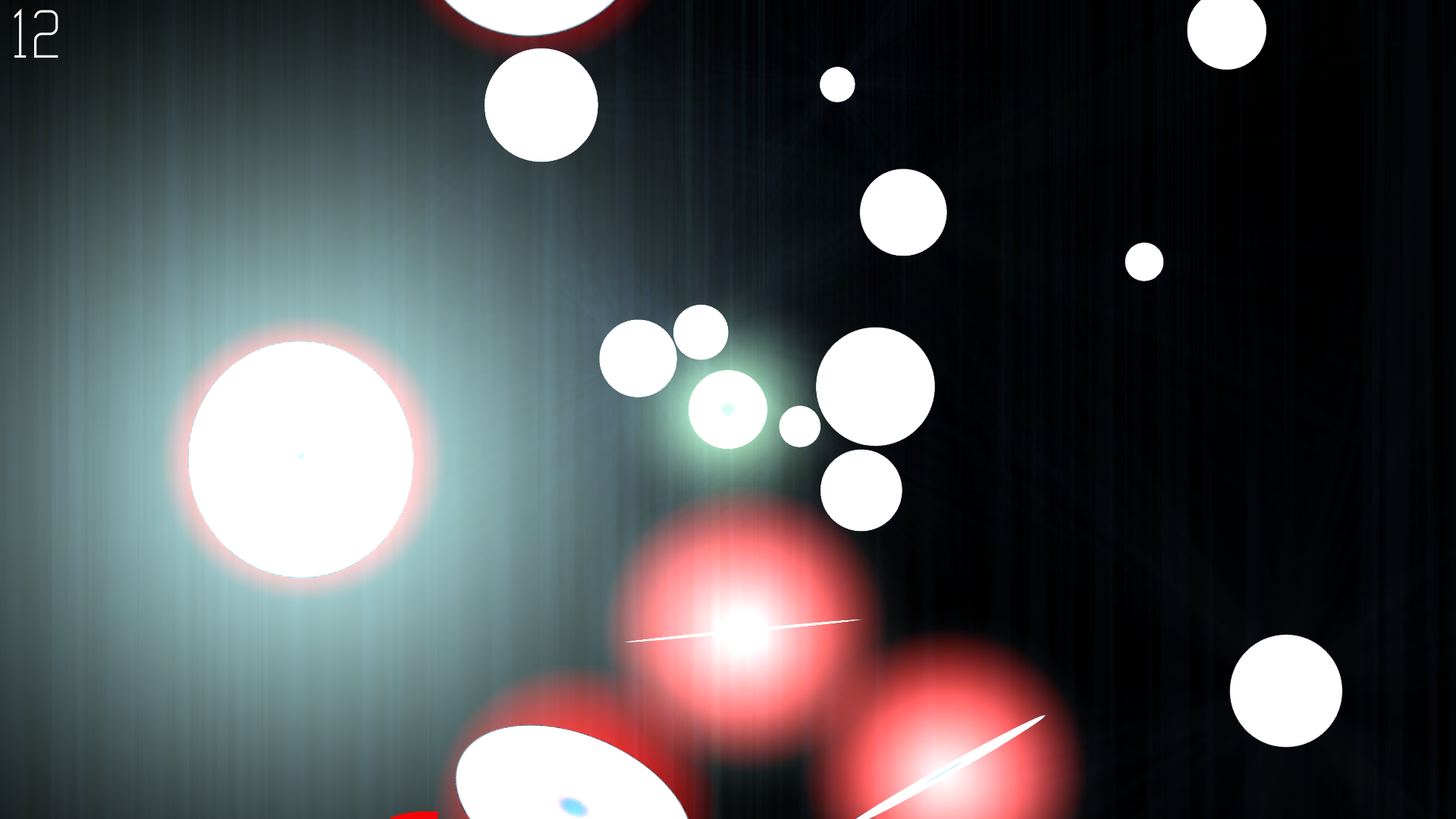 The game is fast paced, with a play time of a only a few minutes, as once the player gets good at the game they will advance through the stages rather quickly. Once the whole universe has been consumed in the game, condensing will trigger the "Big Bang," putting the player back as an atom at the start of the game, where they fight to grow once again. Unless the character dies in some way, this progression from atom to galaxy, and back to atom again, will continue endlessly, challenging the player to keep achieving a new high score. And each time the game resets to the atom stage, the gameplay gets harder. The enemies and atoms will be randomly generated each time, making it never the same exact game twice. This gives the game endless replay value. 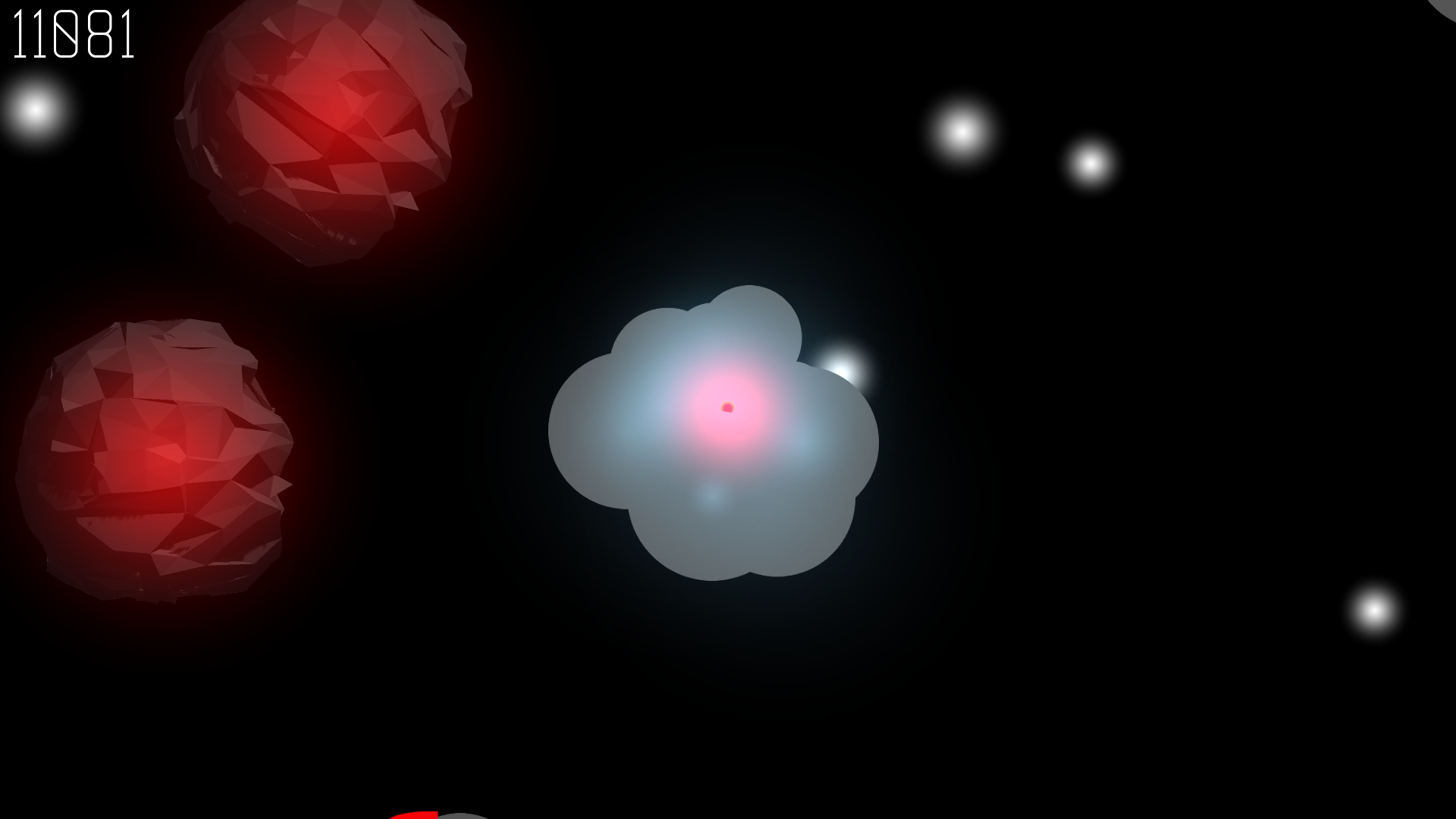 This game is designed to be beautiful. Just take a look at the images above and below, and see what we're talking about. We are focusing a large amount of time on our game's looks. We think the look of a game largely affects the playability of it. Make an ugly game, and nobody would want to play it. Make a good-looking game, and people will play it forever, even if the gameplay itself is awful. (However, our gameplay isn't awful, that was just an example of the power of a game's style.) 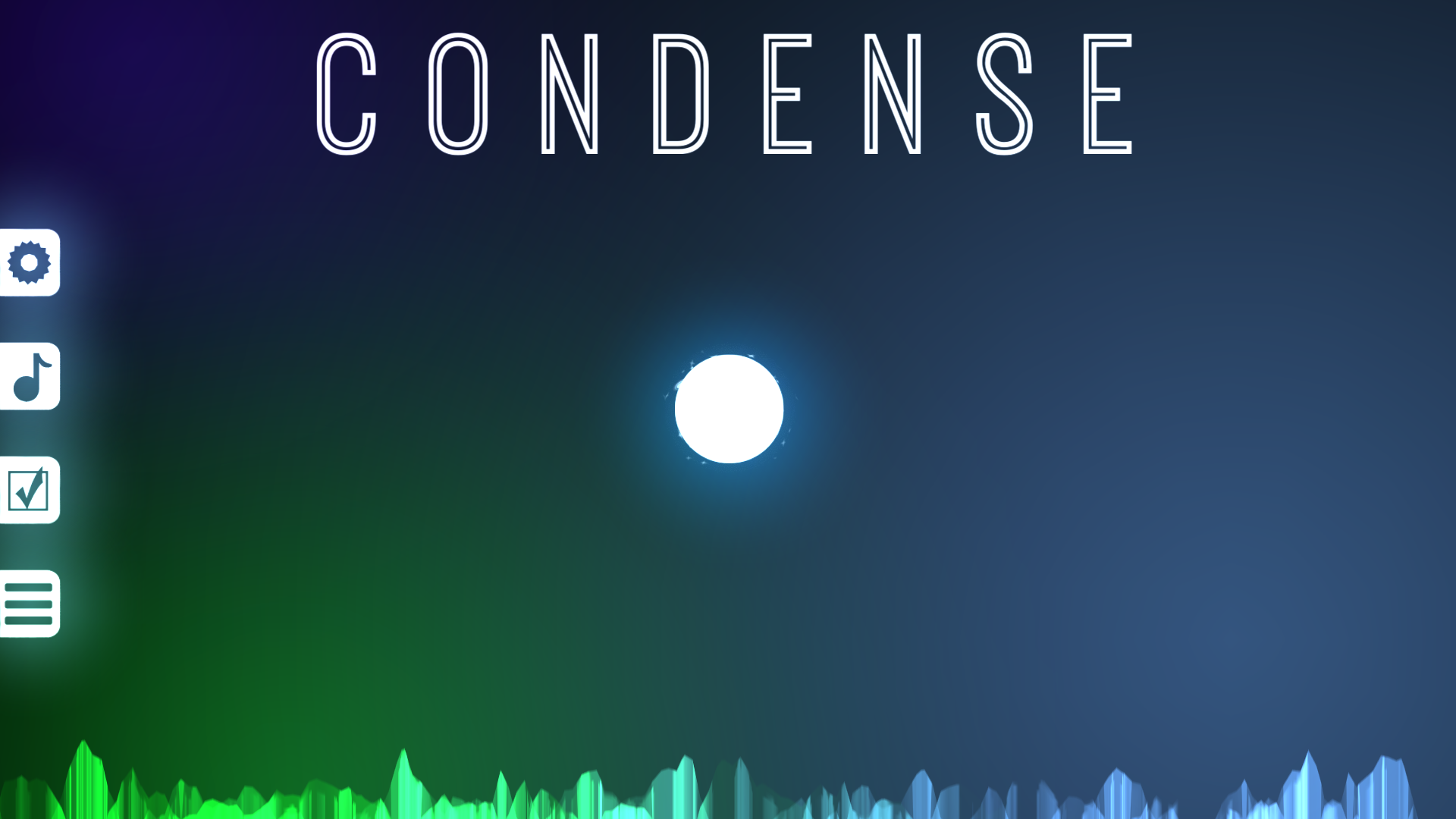 Our game has a style that is surprisingly simple , but still allows for detail. The game is not supposed to be entirely realistic in it's graphics. If you want an ultra-realistic space game, there's already tons on the market. That's why our game is fresh, it's simpler than other games, and has a wow factor to it. We have taken the creative liberty in designing each mass stage of in order to make it look spectacular and fit in with the rest of the game's graphics. 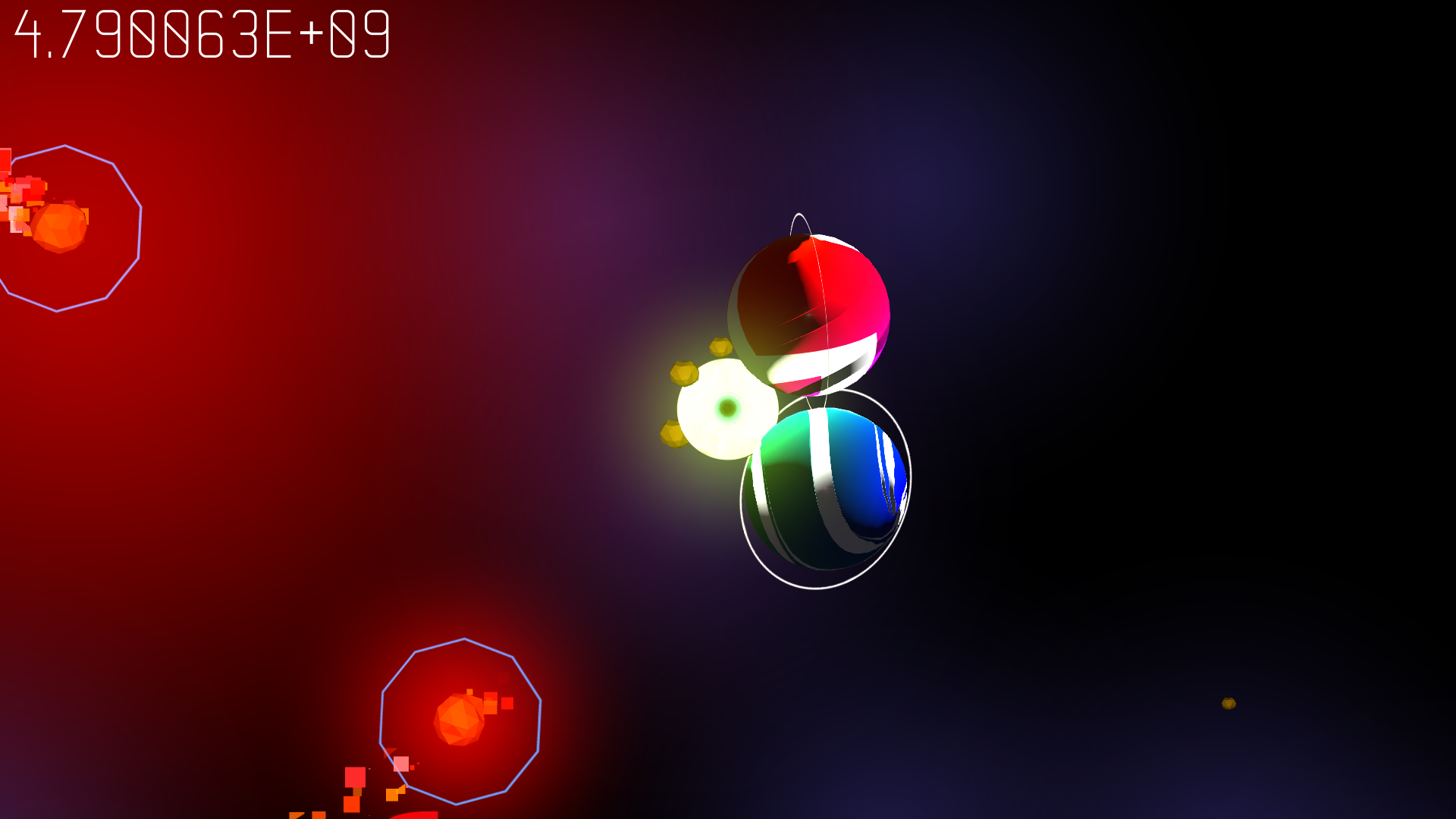 We designed our game's graphics to be dark, ambient, and lonely feeling. This puts emphasis on the player's connection with their character in the game, something we feel to be truly important. We also just love the design and art style we came up with in trying to create this feel. 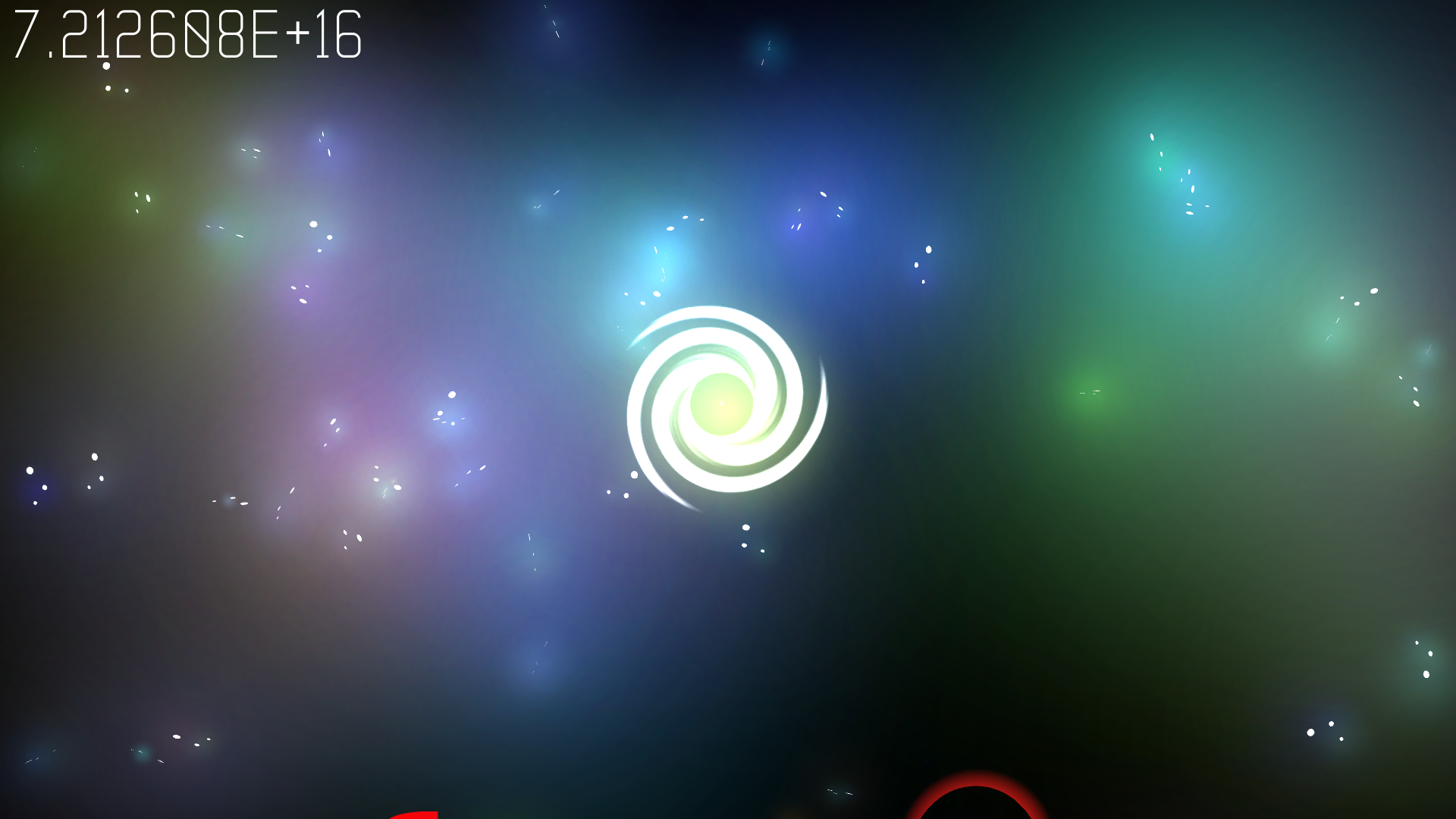 We want to give the game an ambient, dark, and lonely feel. We also want to create an emotional attachment to the player's character. A major part of any game's "feel" and emotional attachment is it's soundtrack, therefore, we are designing our soundtrack to reflect this feel. In fact, we have focused almost as much on soundtrack as visuals because of this. Some of the songs are fast-paced, some are slow and emotional. Some are more beat-driven while others are more ambient. However, despite these differences, the sound comes together and feels like a comprehensive piece. We recommend wearing headphones and relaxing to fully immerse yourself in our soundtrack. 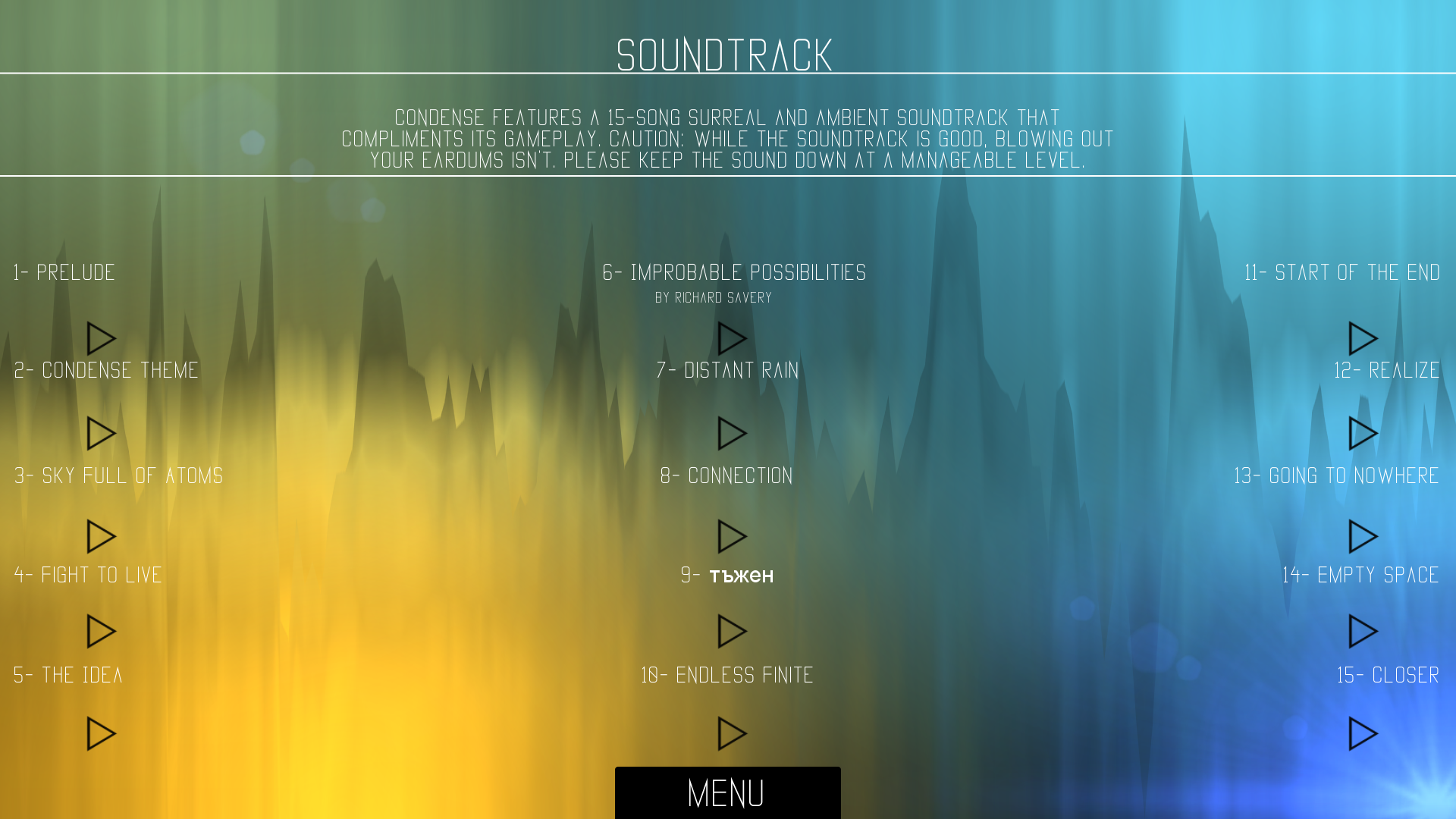 Sample songs can be heard on our Kickstarter page.

Condense Being Released on the 20th!

"Condense- a game about collecting mass" hits the masses- in just 3 days.

That's right. This Friday, the game will be available for FREE on the App Store and Google Play Store. Additionally it can be bought for PC and Mac for a nominal fee. The description for the game is below:

"Condense" is a casual and beautiful arcade game about collecting mass, as the title suggests. Start out as an atom, collect objects, and condense them into yourself to grow to galactic sizes. Evade enemies and race against time in a surreal experience like none other.

The game’s design, from visuals to sounds, features a unique look and feel that allows detail and complexity while still feeling fairly simple and minimalistic. The game is dark and reminiscent of space, which contributes to its atmospheric, ambient, and lonely feel. Along with this, it features an intriguing 16 song soundtrack which is both dark and surprisingly calming. “Condense” brings something fresh to the evolution category of games.

Features:
-Visually stunning game design
-Endless playability- randomized spawning and colors!
-16 unique and immersive songs! (one unlocks at the end of the game)
-42 in-game achievement levels!
-Play as an Atom, A Black Hole, or even a Galaxy!

"Love the movement, love the colors"
-Living The Nerd Life

be sure to check the game out when it hits! get notified of the release by following @valenceonegames on twitter Twitter.com !

This article discusses the Release date of the Indie Game "Condense- a game about collecting mass," a visually stunning game! Read this article to find...