Cold Comfort is a Multiplayer Zombie Tactical Shooter (MZTS?!) with a focus on co-op and environmental destruction. It is the illegitimate love child between Rainbow Six Siege and Left 4 Dead.

The players – survivors and zombies alike – are thrown into a hostile game world where they need to make a simple choice: Will they play as a team or will they try to survive on their own? This choice is forced onto them by an atmosphere of imminent danger and the overwhelming odds of a world that changed too suddenly. We use classic zombie tropes and mix them with a seemingly indestructible new pathogen which causes the mutation: The Gamma Strain. Behind the curtains of this struggle for survival a much bigger story is playing out – a story involving a huge pharma corporation with a vision and all the things that can go wrong, because humanity is simply not ready for immortality. 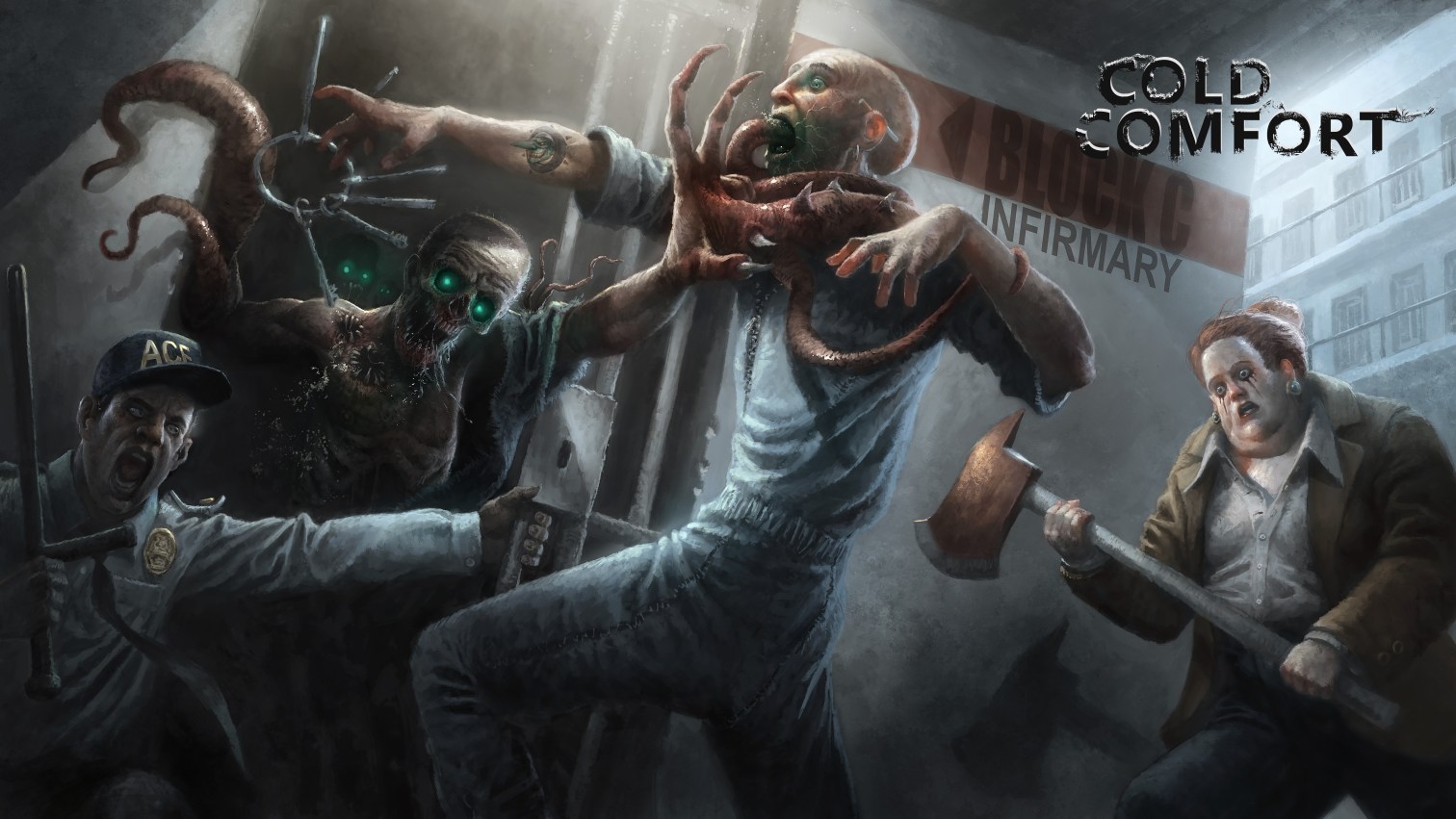 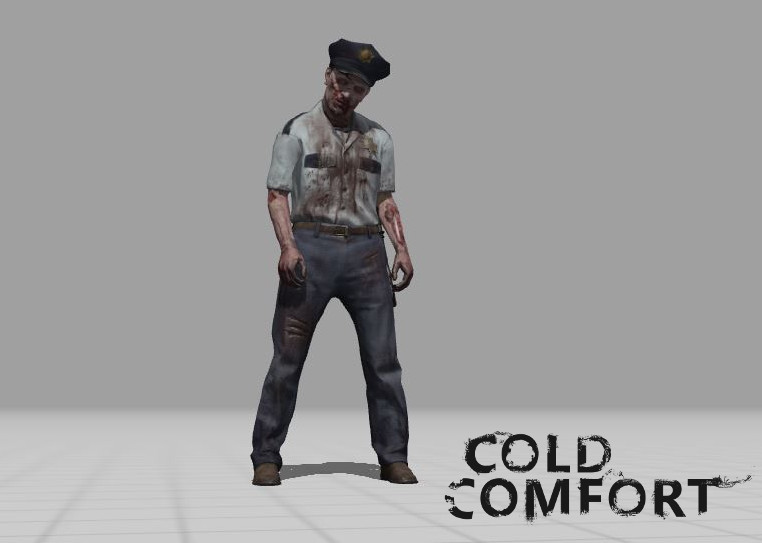 In Cold Comfort, playing together as a team is often the key to survival. Team up with your friends in either intense PVP or PVE settings and choose the right tactics to assure your victory. Optimize your team to assure that you have a fighting chance.

In Cold Comfort, playing together as a team is often the key to survival. Team up with your friends in either intense PVP or PVE settings and choose the right tactics to assure your victory. Optimize your team to assure that you have a fighting chance.

There are two teams, Survivors and Gamma Prime as playable characters with unique skills – depending on which of the five classes per faction the player chooses. One faction usually acts as attacking force while the other one tries to defend itself by placing traps, barricading entrances and much more. The more players work together on accomplishing a certain task, the faster and/or stronger the end result (barricade/trap) will be. The same goes for tearing these things down: Work together and you’ll get it done much, much easier. As in incentive for players to play as a zombie there are a number of perks that come with that, being able to control a horde of AI-zombies only being one of them. The matches will take about 15-20 minutes to play out on a variety of unique scenarios, each with its own challenges and flavor.

The year is almost over, and the CC Devs slowly snuggle up for their winter sleep. … I wish. Sadly, game developers never sleep. There’s a lot more work to be done, no matter how hard we crunched over the last couple of months. We did have a few little successes though. Our first map Seneca really took shape at the hands of our very own jack-of-all-trades Jezza and is now being optimized for proper gameplay tests. Also, we are taking our last steps towards a playable alpha, with Bobby setting up the shooting and movement mechanics, while Gohan meddles with backend and melee.

Gore is a pretty important part of any horror game, and we have quite a bit on the menu for Cold Comfort’s dismemberment system! From bloody bits to gaping injuries, every round will be a feast… Each weapon class will do its own kind of damage : crush, rip, cut, burn and obliterate them to a pulp thanks to the impressive arsenal available in Cold Comfort. Last but not least, the infected will react accordingly to their wounds, stumbling, crawling and running around as you set them on fire.

Here’s the state of our current weapon movement. It is just the base prototype, and it is far from being optimized. We’ll be doing plenty of testing in the coming months to get not only the look but the feel right. The vaulting system is essential, and definitely needs some tweaking, but we’re on the right path.

THE EYES HAVE IT

There was once a dude named Shakespeare that said the eyes are the window to the soul. He probably meant lots of insightful and metaphysical things with that, but in our case, what that really means is that the effort we put into creating and setting up eyes for our characters can make the difference between a dull, lifeless, unrealistic look, or a lifelike and engaging character, capable of conveying emotion and expression.

A character with … soul. Human eyes are much more complex than the simple sphere we like to imagine they are. And since eyes are one of those things we humans instantly relate to and use to evaluate and engage other humans, each small error and difference contributes to our reaction to the character, and pushes us down the uncanny valley. So, in order to make our character’s eyes look alive and engaging, we use the Unreal Engine photorealistic eye model and shader, with some custom adaptations that allow us to quickly change eye color, pupil size, etc. Reflection, refraction, correct angle, eyelid occlusion… all to make our character’s eyes something even Shakespeare would be proud of!

Weapons in Cold Comfort are customizable. Almost any detail can be removed and replaced. The customization offers the degree of freedom that will allow players to create a unique weapon configuration that suits his or her playing style. Customization includes the change of mags, installation of flashlights and laser pointers, tactical grips, various scopes, etc.

On some weapons, even the trigger or charge handle can be replaced. These customizable elements will affect the gameplay and gun handling including:

Accuracy: How fast the reticle for this weapon changes size when fired. The smaller the reticle, the more accurate the shot.
Reload Speed: How quickly the weapon can be reloaded.
Range: Max distance (Optimal Range) before the weapon is no longer effective. The damage applied to enemies at greater distances is lower.
Stability: How hard the weapon is to control when firing for a prolonged period.

We heard you like zombies. So we’re currently doing some stress tests as to how many zombies we can have on the map. How many zombies are too many? Well, in the coming months we’ll hopefully have a better idea of that number. It is of course a balance between realism and ensuring that players have a smooth and enjoyable experience with minimal frame drops. There are many “work-arounds” that we can implement, including only spawning zombies when required, but that could be tricky.

Games are developed from a cultural context. Localization is about customizing that context to another, specific market and is an effective way to widen the market and reach more gamers. A large number of gamers will not even play a game unless it is in their native language. Localization is an easy way to please your users. We want to make them feels like it was made for them specifically.

A perfectly tailored localization, always keeping the user experience in mind, satisfies gamers and allows them to play their own story. The more languages are covered, the more happy users will play the game in their own cultural and linguistic context. Localization is of great importance as it will stop confusion on storyline and reduces the risks of being misunderstood or given the wrong meaning and forges a personal relationship between the developer and user.

When launching a game, we want to reach a global market and choose which countries, and what languages we want to go for. We already know that gamers across the globe want to play the game, preferably in their native language. So the game becomes more competitive in an international market. Now the translation has to cover the right markets at the right time to stand out. When developing a game, localization should always be a part of that process.

Only then it will be possible to achieve a multilingual launch. Localization is a way to avoid “other” translation – or ROM-hacking. With a professional translator it is easier to keep control of the translation quality and avoid mistakes. Localization as a part of the developing process will save time and money rather than changing the text and translating it just when the game is done.

Programming, creating 3D assets, rigging, animating are the core of any game. However, the world of any immersive setting is contingent upon many factors. One aspect that we feel is important is the usage of custom game specific in-game products.

Don’t get me wrong here, we’re not planning on selling anything to you in game, we’re simply talking about products that exist only in the world of Cold Comfort. Whether it’s a sugar infused carbonated beverage, a smooth refreshing beer, or a variety of companies and services, having them in the game, will hopefully add depth and richness to game world and story. You can check out the Vyal website here or the Vygour website here.

We’ve had the Cold Comfort Community Discord server up and running since this past summer, and we’re slowly gaining traction and have almost 800 members! We’re pleased to announce that our server is now VERIFIED which means that we’re not only lit, but we’re legit (at least according to the fine folks over at discord!)

Originally we had assumed that the majority of direct communication with our fans would be done via Facebook or Twitter, but low and behold here we are dolling out daily updates to our beloved Discord fan base.

We’re very fortunate here at Gamma Minus to have the talented Antoine Guillo on the team! Antoine bridges the link between art and development for Cold...

We’ve been busy these last few weeks, and we thought we’d share some of our progress with you in this ‘lil devblog. The game is really coming together...

We've been busy updating our game! Check out what we've been up to.

Check out what we have planned for Cold Comfort! Take a look.

if i had both the money and the internet fast enough o run this i would say "i want this.. NOW... NO, I WANT IT NOW"

A Mass of Dead Tactical Shooter