Coffin Rush is a one screener arcade game, which will cut to the chase and just be all out hard. It's about a skeleton, driving a coffin around the world. ___ You’re Simon (the skeleton), who was brought back to life by certain someone. Simon wakes up in a rigged coffin with wheels which rolls somewhere at an increasing speed ^...^' ___ You connect to the rails on the side of the road via grabbers. This way, you receives electric charge and stay alive. There'll be obstacles on these rails which you'll have to avoid by disconnecting. When you disconnect, your energy goes down. The core gameplay is to keep Simon alive and control two lanes at the same time (at crazy speeds :P). ___ I wanted the controls to be very simple. So the game only has two buttons, to retract left and right grabbers. On mobile it'll be taps on the sides of the screen. I might also put out a PC version for those of you interested to test and give feedback (which I absolutely welcome ^^)

Some lore of Coffin Rush

Originally, I planned to have story pages in the game which players would collect in order to progressively uncover the plot behind Coffin Rush. But since the game is not of an adventure type and is more focused on technical arcade gameplay, there's not much to spoil here really and I thought revealing the story to Indie DB community wouldn't hurt at all. I may still include the pages in the game but if someone found Coffin Rush here, they might as well know the back story it has so I decided to write down some lore =]

Count Reincarnaticus was an alchemist of questionable morals and with an insatiable
desire to bring back the dead. Of course, being the genial mastermind and beyond, he was perfectly aware of all the reanimation techniques using the electric shock and tried those many times but alas! to no avail. The problem was not creating life but rather sustaining it. Moments after the electric jolt, life would slip away from the body, making it as dead as ever... sometimes even deader.
Unquestionably, this was not enough to stop Reincarnaticus, oh no, far from that. Combining the simple concept of friction with a complex and ambitious architectural endeavour, a semi-crazy alchemist constructed a pair of metal rails which encircled the entire planet. Not that society knew anything about planets, but once Reincarnaticus started to build the rails and eventually reached his own castle from the other side, he decided the rails were long enough, regarded his discovery of the world being round as a minor offshoot of his brilliant work not worth anymore of his precious time, and carried on with his tasks. His plan was to let the body drive in between these rails in a customized coffin (because he was too much of a necro-oriented genius to construct anything else) which would have two metal rods on its sides. The newly revived body would control the rods so that they would grind against the rails and generate electricity. Since these rails were connected in a giant circle the body would be in perpetual motion and would receive electricity indefinitely thus, staying alive forever!
Was alchemist's plan perfect? Almost. The tiny problem that remained was the body's ability to properly control the rods because, mind you, the planet-wide railway system is not the most manageable one in the world and stuff tends to accumulate on it. He tried propelling several reanimated bodies down the rails but they crashed soon enough and the big part of the reason they crashed was because people misunderstood Reincarnaticus's contraption... in two ways even.
One group thought it was a divine occurrence and was constantly putting pots with offerings on the rails (because pots were considered cool), and the other group feared the newly resurrected bunch (were they more down to earth?) and were trying to get rid of them using TNT crates and barrels (because TNT!!!). 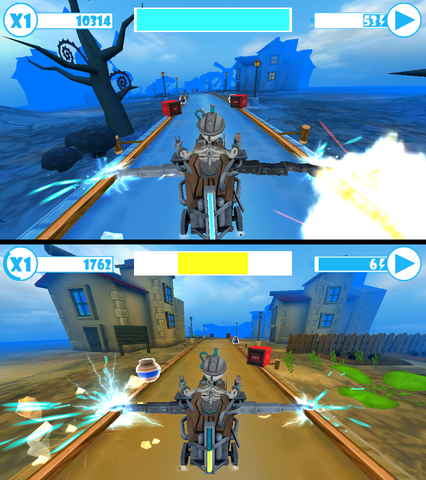 There were also several weirdo chemists coming up with special items to slow down or instantly kill the bodies and there were (obviously) some counter-weirdo-chemists who were making the good stuff for them (the bodies, not weirdo chemists. Just makin sure).

Some even went to lengths of putting a special coating on rails which would reverse the electric current and suck the life out of the poor victim as soon as they'd touch them. All the good guys could do in this case was putting up a warning sign saying "DANGER" (because explaining the coating and all that stuff would take too much to write and too long to read). 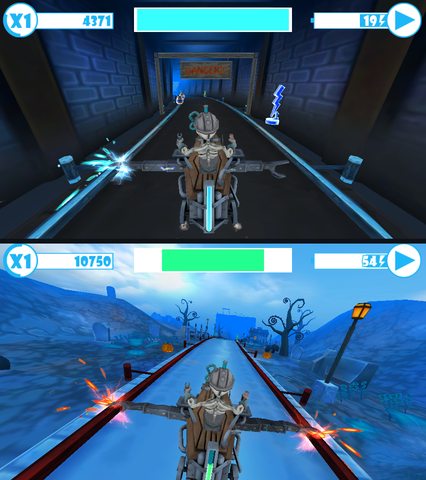 As for Reincarnaticus, all that he needed now was a perfect candidate for the perfect ride.

Simon was a simple man. In fact, if one would try to find the simplest man in the world, Simon would probably have a fairly good chance to win the title. He was not the strongest, bravest or the brightest and as such, he worked as a pig caretaker. All he had to do was make sure the pigs were fed and herded. As one would guess, the job was not always very exciting and Simon would get bored every now and then. He thought long and hard about ways to make his working environment more exciting and finally, with enough mental perspiration and determination, he came up with
a little game he could play with the pigs.
He would take a small piece of bread and stick his hand through the fence where the animals where. The pigs would see the food and rush towards it, in the very last moment Simon would pull his hand back and leave the pigs empty handed... or mouthed, because pigs can't become empty handed due to the absence of hands.
Of course every noble skill needs refinement before it is perfected and Simon would lose the bread to pigs (and sometimes even get bitten) many times, but he did not give up. From the freezing winters to the hottest summer days, he practiced and practiced. Years have passed and eventually, he became the master of the game. He could taunt the pigs and think about other things at the same time. He could stick two hands through two different fences and manage them both, that's how good he was.
But nobody knew or cared about his little game, no one realized that they gazed upon the master, no one acknowledged Simon. And so he lived his ordinary life to the end without being recognized for his mastery and died a simple man who nobody would ever remember.
Until Count Reincarnaticus's grand experiment that is...

There was a flash of light and suddenly Simon was back to the living world. It was so unexpected that he could not grasp where all his ghost friends went all of a sudden. Not that they've never done it before, like on his birthday party for example, or when they were deciding who would stay and welcome the newcomers while others went to scare little boys on Halloween night, but this was different.
All Simon could see now was a bleak figure shrouded in semi-darkness, laughing like a mad man. In that very instant Simon realized where he was. Who would not recognize the sinister laughter of Count Reincarnaticus (yes, the count was very old now), the entire village new about the wacky alchemist and Simon was part of that "entire village".
Before he could utter a single word, he suddenly began to move forward in what appeared to be a rigged coffin with some metal parts attached to it. He zoomed out of the castle and down the hill. He could feel the life boil inside of him. It was an exhilarating feeling and was certainly better than being dead. Simon looked around and spotted two metal rods sticking out of his coffin and grinding against some kind of rails on either side of the road. He also had two levers at his disposal. Carefully he triggered one of them and in that instant a metal rod on the side of that lever contracted and detached itself from the rail. Simon felt his life fading away from his newly reanimated body and quickly released the lever, attaching the rod back to the rail again.
"Okay" he thought, one thing was clear; the levers controlled the rods but... AND SUDDENLY BANG!! The other rod hit something on the rail and the metal screeched in an angry screech that metals make when something they don't like happens. In the distance, Simon spotted another object on one of the rails and before he could make out what it was, it closed in on the coffin very rapidly. He quickly grabbed the corresponding lever and dodged the object before it could hit the rod. He performed this action automatically, without thinking and with a very fast and precise hand movement. And then it dawned on him...
It did not matter to what purpose Count Reincarnaticus brought him back to life; neither did it matter what was this coffin contraption he was in; nor did it matter where he was going. The only thing that mattered now was that he could use his hard earned skill, demonstrate the perfection of it, bathe in the glory of his own mastery and show the world what he was made of!! ... Also, his life seemed to depend on it so he'd probably have to do it anyway.

Hey guys, I thought I'd share the genesis of Coffin Rush with you. It's a 2D prototype I made in Construct 2.

looks good - I would like to play it on Iphone