In a distinct contrast to the previous map (Battlegrounds) which begins war torn, Stoneshill has been designed to be a royal palace that players can trash and destroy through the objectives. 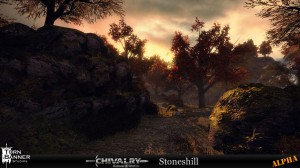 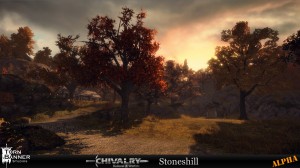 This week we reveal to you the new stoneshill, as you can see from the shots this time we went with a much more royal, colourful feel to it. This will be a strong contrast from the previous map we showed (Battlegrounds), but we wanted a mix of maps where you feel like you are entering a battle in progress and maps where you are the first troops to charge to battle. 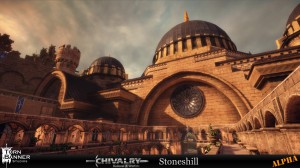 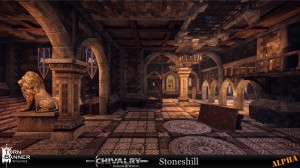 This will allow us to in the future have players dynamically trashing areas of the map as they complete objectives so by the time the map is complete it will seem much more like a warzone, which also helps players to see their progression. 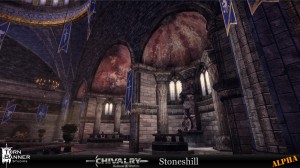 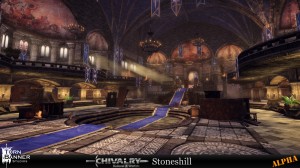 We're also getting closer to being ready to show off some gameplay footage which will finally feature ranged weapons such as the crossbow as well as shields in action. 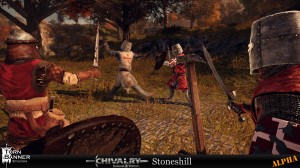 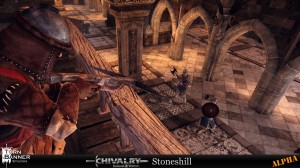 Thanks and let us know what you think of the game and any suggestions on our forums over at www.ChivalrytheGame.com !

Looking awesome guys,
Keep it up!

Some parts are really 'blocky', if you know what I mean. I guess it's because of modularity? None the less, the levels are quite nice and the lighting is incredible. You deserve a pancake.

Yeah, the lighting is very good, very well done ! :)
I love the atmosphere on theses environments !

Great visuals! can wait to see all the eye candy In-Game! I love the theme and all the Medieval architecture. You guys have a lot of talent!

You guy's surpassed the ol' Age of Chivalry by a long shot, AoC player is happy for new game!

All this awesomeness...
And I haven't even eaten breakfast yet!