Some big news on our project lately, we have just recently launched our Kickstarter, have recently been in Germany for Gamescom and just announced that the game will also be playable from a 3rd person perspective and put up a new website!

For us, Kickstarter represents several awesome opportunities, making it
a win win situation for current or new fans of the game and the development
team.

- Because kickstarter fees are less than those from traditional online
distributors, we are actually able to offer the game for cheaper, while the
developers make roughly the same amount. So it allows our fanbase to pick up
the game at a reduced price and in doing so more directly support us, the
developers of the game.

- Kickstarter is also an excellent way for us to allow preorders for the
game, something we were unlikely to be able to do otherwise due to
"redtape" and regulations with many online distributors.

We go into more detail on this on our KickStarter Page and Video. 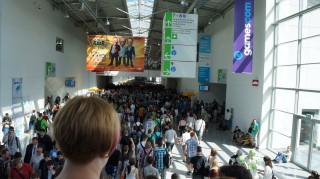 Wow. That word sums it up nicely. Gamescom is huge, it is like a giant seething
human monument to the awesomeness of video games! We only spent a few hours
this year in the public halls but every minute in there feels like a rave. The
booth for Call of Duty Black ops 2 was bigger than our hotel! 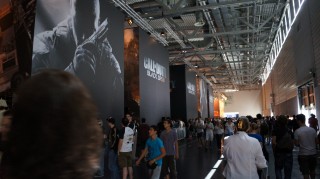 Most of our time was spent in the Business Hall this year,
showcasing the game to the press. We were lucky enough to get some time from
Rock Paper Shotgun, GameTrailers, No Frag and Destructoid among others.

At first we were actually making press sit on the floor to
play the game as can be seen here: 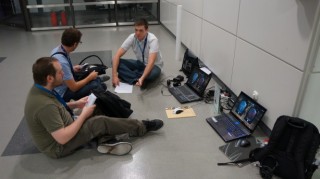 Us on the floor demoing to Nofrag – French gaming site.

But later we were able to find some proper booth space
courtesy of our retail in Europe partner, Lace Mamba. It was our first time at
Gamescom and overall a great experience and showed how massive the gaming
industry really is and some of the giants that we are up against.

We also managed to get some great new footage of the game
via Gametrailers Walkthroughs:

And be sure to check out our New Website:

Cool stuff, I liked the mod a lot :D

I recommended Natural Selection 2 did this and they(The developers) said there was no point if you really wanted to get into the Indie industry, you shouldn't use it.

But good for you, I'll probably give some to it.

No offense, but your game is hardly new and you've been working on it for years.

Some of these tiers...the rewards aren't very good.

This one strikes me as the most offensive:

Sir Nameabot Edition - All previous rewards + Name one of the Bots in the game (Subject to approval, must not be profane or obscure) + Your name in the game credits as a Chivalry Fanboy, includes retail copy of the game (please add $20 for shipping)

Just, you have to give actual incentives here. Some of these seem completely worthless.

I know this is meant to be funding / donating, but the rewards are limited.

When I saw "Pledge 5$ or more" I expected beta access, perhaps, that'd be the least you could do. For 5$, you literally get nothing.

Now, I don't know if you know about Red Orchestra 2 - it's a sequel to another mod gone retail. They charged 39.99$ at launch. The launch was a failure for many reasons, but the price was one of them. A big one.

$50,000 is actually a relatively low target for Kickstarter and I hope to clear up some of your confusion and concerns on the other items.

Firstly, Chivalry: Medieval Warfare will not launch as a UDK title, we are purchasing the full Unreal 3 Engine Licence and the KS funds are a big aid in that. Also in terms of marketing that kind of money is very, very small and goes nowhere near as far as you might expect.

You make valid points about some of the tiers from a logical standpoint and if that is your take on it then yes they are worse options than the other tiers. Maybe we could have split the tiers and pledge amounts a little bit better, but we were simply trying to provide options for people who wished to donate in those amounts.

If you want incentives rather than to aid the developers further that is great and the $25 and $75 options are designed for that purpose.

We chose the price of the game very carefully, keeping in mind the value we felt the game represented and our comparable competitors planned prices. It is up to you if you feel the game is worth that price and will always be your decision.

We've updated our FAQ on the KS page to try and address some of your other issues more clearly. Thanks for your thoughts and I hope this helps clarify our intentions.

Glad to see it updated, just went and saw it, beautiful.

Disappointed with a few things still though; beta access should be granted for anyone who donates on Kickstarter, up to the 50,000$ point. More people playing the beta can't hurt, more feedback, more word of mouth, and a larger range of systems to test it on.

Also the fact that 150$ dollar tier only includes one copy, while the 75 dollar tier includes 4. Seems plain stupid.

Should contain 6 copies + The extras.

Besides the fact you still ask for shipping on 750$ donations, I'd say you did a bang up job with the new F.A.Q

The 5$ having access to beta would be an incentive; they pay 5$, do not own the game, but play it and most likely love it, then can purchase it. Good all around. You end up getting more money!

1. Because despite the mod, you do not have an established name or brand, though you did change it to Medieval Warfare to attract the Xbox crowd, which I still dislike.

2. The videos look good and while still early footage, they very clearly do not compare to AAA+ companies. This sounds insulting I know, but it's a simple fact, budget and team size wise, not meant to be mean to you.

3. You're at the start of your companies career, you need word of mouth more than all the commercials in the world. Did you see Section 9: Prejudice, released for 14.99$, SP, and MP, and quite abit of content. It was very popular and a high seller due to this.

Previously they had released the first one for full price and no one bought it. But @ 14.99$ it hit a sweet spot.

I'd suggest you look more into economizing your price.

As soon as it went on sale for 19.99$, more copies were sold than all of release than up until that point and it's playerbase is bigger than release right now. You should be looking to sell quantity wise.

As far as I am aware, you are using the UDK and a free license - which means you don't have to pay them a dime, until you make 50,000$ + and even than it's a very small percentage.

I wonder, does that 50,000$ include Kickstarter? Interesting.

Course, your 24.99$ can be forgive and seen as reasonable, but from a business standpoint, I'd say lose the 4.99$, make up for it in quantity of sales. Sell more at a slightly lower price than sell less at a higher price.

The more people who have it, can also spread it around and their friends will see it and they'll buy it. Word of mouth. You want more people to have your game so more people will buy it, very simply.

You also don't mention; is the digital Copy Steam, or not? IF it's not, I imagine alot might be abit annoyed, and if it is, just put it on the page, as that will be an incentive for more to buy it.

I really liked the mod for Half-life 2, I haven't played any of the game but I would like to. Though I do have something I would like to say. I watched the kickstarter video and I know you have to say things to please the viewers and get them excited, but when you mentioned that you "Feel when you get hit/hit your opponent" I cringed a bit. I say this because I never feel like I'm swinging a sword or a huge axe, I feel like I'm wielding a piece of paper. The reason why is because when you hit the opponent your sword should stop swinging and not continue on its path, sure you can say it's a slash but from what I see you can be right next to each other and its just goes through them and yet their body is intact (adding camera shakes don't help). So until the game starts improving on some of the immersive breaking elements I just don't see this becoming that great. I guess that's why I always see myself playing the ranged classes, since it's hard to go wrong with them. My 2 cents.

Ooo, these videos look really, really nice! And I love the font, reminds me of Diablo 2, please don't throw it away in final release!

I wish there was a closed or open beta people could attend..

kickstarter only as credit card payment available... man, that sucks


sry for my bad english