Many changes to the Child Arms network and new demo update.

Throughout all this time, I've been transforming the game and its social network as they were in need of updating. Production of the game was halted as I needed to reevaluate my online presence since I've felt some sites were left without any activity for so long, including the Steam store page, which should've been my most important site, it being the place I want people to congregate to.

I also managed to update the game with some adjustments and fixes whenever I could. That was when I found a bug that crashed the game when trying to detect controllers so I had to release a new demo. You can find the updated notes on the Steam store page, which might be the place to find out info about changes to upcoming demos as I would prefer everybody to download demos from the Steam store page from here on. For IndieDB, this will be a more general devlog where I will post development news. If you want to know about upcoming demo updates, then I highly encourage you to follow the Steam store page or the newly made Twitter account for Child Arms. Still, for the time being at least, I will highlight one important aspect of the demo.

The demo has been updated to 0.3.2.0 which includes many additions and changes. One of the biggest ones I want to go over in this devlog is Neutral discipline. In fact, I don't believe I've gone over disciplines in the devlog before, or at least maybe have gone briefly on them. Here's a quick refresher on the concept. 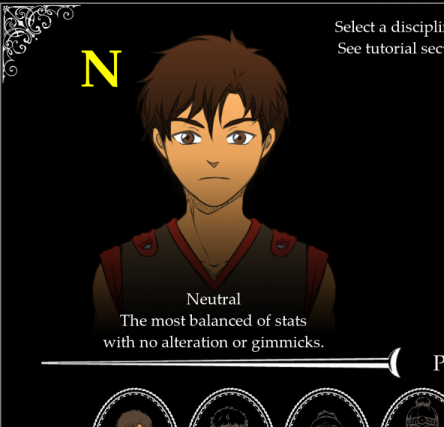 When you select a character, you are prompted to select what are known as Disciplines. These are gameplay-altering options that will allow you to change the stats of your chosen character to fit one of three archetypes.

Power: Your character's offensive power will be increased. Even the lightest attack will do more damage than any other discipline. This is the only option to fully max out a charge attack. This all comes at the cost of speed.

Speed: Your startup and recovery timing is reduced, allowing you to chain attacks, at the cost of your offensive power being reduced as well.

Defense: Your defense is doubled and your dodge lasts longer. This discipline allows you to retain your default offense and speed but you lose your ability to charge your attack.

There is also a fourth discipline called Instinct. This discipline is special in that the only advantage is that some moves are automatic. Instead of having to time your dodges, you simply have to hold down left or right and your character will automatically dodge an incoming attack. Your character will also either block or attack automatically when charging and the opponent is about to attack. The game detects what the best option in that scenario is. This discipline was designed to help new players get adjusted to the controls and was not designed to actually give much of an advantage to any of the character's stats, thus leaving them in a default state.

A comparison of Enro's high tap damage between all the Disciplines.

Those are the disciplines to choose from and have remained this way since the first demo was available. There was an issue with this: you HAD to choose a Discipline; no option was present to just use the default stats. You had to either alter your stats with one of the three stat-altering Disciplines or use the automatics of Instinct.

The latest demo changes this. Neutral Discipline takes the stats of Instinct but removes the automatics. That is why it takes up the same slot as Instinct. You'll have to go to the options menu and turn off Instinct in order to choose Neutral.

While this will prove useful to those who wish to fight without any alterations, there is still the matter of testing which I have yet to do. The update to the demo was a necessity because there was a bug that needed fixing and I had just barely added Neutral so there are balance issues that need to be dealt with.

I'm hopeful that I will have time to iron out these imbalances so that Neutral can become just one more arsenal in your favorite character's fighting style. In the meantime, you can experiment with Neutral and see if this Discipline can be right for you in future updates to the demo.

With my task of fixing the Child Arms' online presence, game development had to come to a halt. The sites are almost done and ready to serve their purpose so I'll be going back into production to begin the development of the next character, Mayana. The last character, Gunshi, took forever to get done, about 10 months from the planning of his sprites until his release because things were going hectic in my life. This is not going to be the case again as I am now aiming to get Mayana done in as little as 4 months.

I believe I have talked enough about the character creation process in past entries of the devlog so you should know there is a system in place to produce them. Coding isn't so bad as I have a template in the form of Enro and simply edit that to fit the needs of the next character. Art is where the majority of the time gets eaten up. Not just drawing the character's sprites but creating the layers to color, concept artwork, and even temporary sprites to test them out all take so much time out of my day which is already compressed enough as it is. But still, I have a process at this point that I am confident that I can have Mayana up and running by June or July. I will go into his character in the coming posts on this devlog because I still haven't gotten a chance to actually plan out his sprites other than a list of moves I want him to perform. Stay tuned to this devlog to learn more about him in the coming weeks.

I am still in the process of organizing everything before we can proceed with Mayana's sprite sheet as I concentrated so much to getting the online presence ready. I want to do everything I can to give Child Arms the audience it deserves, and I feel like I've just scratched the surface here. Who knows what the future will bring but I have a strong belief that all this hard work will pay off.

We just got a new Twitter profile since the old one was blocked by Twitter themselves for reasons I will never know. Please be sure to follow us on our new profile for announcements and occasional posts.

Don't forget to download the demo and wishlist us on Steam: