Cell.Protect is a basic top down shooter game inspired from Arc Aether Anomalies. Your aim is to shoot the spores protect your cell, collect proteins which are generated after you kill an spore to increase the health.

Thanks for voting and helping Cell.Protect on it's quest to become the 2020 Indie of the Year. You are now in with a chance to score some free games. Help this game secure more votes by embedding the widget (or link) we have included below on your favorite sites.

Cell.Protect is a basic top down shooter game inspired from Arc Aether Anomalies.Your aim is to shoot the spores protect your cell, collect proteins which are generated after you kill an spore to increase the health. 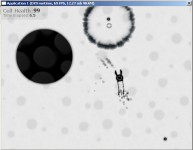 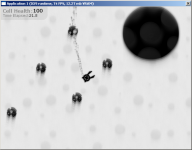 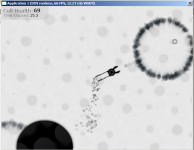 Notes:
1.If you have an old computer go to options and disable all the special effects to get a nice framerate. Some options are disabled by default.

2.[BUG]:If you die in the game and go back to the main menu after the score screen and click on play button again to play the game, for some reason the timer and generation of spores is started late(after 10-20 secs).So it will be better that you exit the game before playing again. (PS: I'm trying to fix that bug :)

Cell.Protect is a basic top down shooter game inspired from Arc Aether Anomalies. Your aim is to shoot the spores protect your cell, collect proteins...

The gameplay is a bit odd, I believe it's because the collision radius of the cell is a bit too high, maybe lower it, the player can enter it a bit, but eventually gives it more freedom to go around.

I would also suggest to throw up some different colors, there is one type of enemy right now, so add up more enemies and distinguish them with different colors, and maybe when they hit the cell, the cell becomes the color of the enemy.

The things that the enemies drop should have some effect when they disappear (when you don't get them in time), like a little particle explosion or just a fade away effect.

Also I discovered a bug. After you play the first time, when you go play it again (without quiting the game and executing it again) no enemies appear anymore.

Well after saying bad things, I must say I really like the main menu, the blurriness, the stuff moving around, a very nice touch you put there.

This is a game that needs some improvement, and I stated here what I believed to be the things that could be improved.
But the game is yours and of course you decide what to do.

I hope I didn't offend you in any way.

The best of luck to you,
Mário

Looks very promosing! ill get this when i get home! im at work.

*some kind of power up specials
*maybe a skill tree(level/xp based) for ability's with cool downs?

Edit: another idea came how about make it like last waves, then level up and a new color like level black, white, blue,green etc.. to add to the game

again just ideas it's your game after all :P