Celestium is a frantic party-fighter where Greek gods and goddesses fight for control of colored horoscope blocks. The more blocks you own, the higher your score goes. Claim a block with the matching horoscope symbol as the one you’ve selected for your character, and you get even bigger bonuses!Celestium was developed for the 2014 Global Game Jam at the George Mason University site outside of Washington, DC. The GGJ2014 demo can be downloaded here.

It has been a couple of weeks since we have last updated our game here, and we felt it is time to see what is behind curtain number one.

We have been saying "wouldn't be cool to have XXX or YYY but without ZZZ" and other game designy things, and being the young, naive, motivated programmer that I am, I was like yea I can do that. So in my spare time, I would make all these mechanics come to life only to have us come up with more right around the corner and thus I was sent into an infinite loop of designing-developing-implementing. Now that the loop has been temporarily stopped, I am proud to show off what we have so far and how these new mechanics effect the game.

Please keep in mind that most of the images do show the mechanic, but they are using internet/programmer temp art and will not be there in the final product, such as Zelda's jar or the Mario clouds. 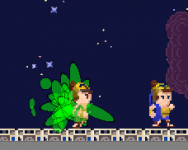 Players are able to hold down the attack button/trigger and charge their attacks. If a player is hit with the charged attack, they will become confused and start seeing rubber duckies floating above their head. Confusion temporarily stops the player in their steps, giving the opponents the advantage of getting more blocks without worries of take backs. To guard against charged attacks, players are able to bring up their shield and stop the charged attack from confusing them. 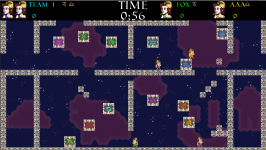 You are now able to make teams at the character select screen, by changing your color to match another players color. You can have 2v1v1, 2v2, or 3v1, but never 4v0 cause where is the fun in that. 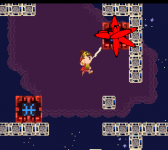 Before, we had attacks only going in the cardinal directions. As fun as that was, it just never felt smooth, so we made it so that players can attack omni-directionally. That's right, for the price of one player, you get 2 times the places to attack! But wait there's more! We were also using D-Pads as our way to play the game. Now we have it set up so that you are able to use Xbox360, PS3, and Ouya controllers and their analog sticks! We have been testing our games on Windows and the Ouya, and have had little to few snafus along the way. 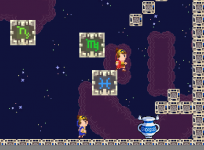 Pandora's Pithos is going to hold up to it's legend. Opening/Breaking/Throwing the pithos will cause it to unleash unknown power. Be that good or evil, is totally up to it. Most of what we want to come from this object are things that could sway the balance game. It could give you temporary super powers from items of Greek mythology, or it could cause the whole world be covered in snakes that could care less who called them to come out play. We want most of the mechanics from the pithos to be bitter sweet.

These shoes give the player a significant speed boost, but with great speed comes a great lack of control. Even though these shoes are hard to use, it is always fun to see a trail of dust clouds follow you. 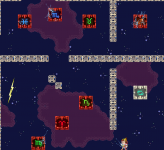 You can make it rain down Zeus' Lightning, potentially activating zodiac blocks for you and stunning players in the process!

Calling Medusa's snakes will have them come out of every crevice possible. While they won't actively hunt players down, they still pack a punch. Whenever these guys bite someone, the player becomes petrified. Players can frantically move their analog stick back and forth, hoping to break free sooner.

We are continually doing our best to get more ideas and mechanics into this game to make it better for everyone. If you have your own grand idea of a game mechanic that you think will fit perfectly with Pandora's pithos, then let us know and we will consider adding it to the game.

Be on the look out for more soon!

We made a fun game during Global Game Jam 2014, and we're working to turn it into a fully realized game. Check out our latest media!