Carrier Squadron is an arcade-style space shooter with a tactical twist. Launch and guide a swarm of fighters in frantic battle against waves of enemies. Upgrade your fleet with missiles, superlasers and more! This game is currently in active development, with public test versions out now on Android and the Java platform.

So after diving headfirst into some rather clever shader code by Kalle over at the Badlogic Games forums I am integrating a modified version of it into Carrier Squadron. This will definitely be in the next version of the game, along with some other new features I will be revealing in detail later. 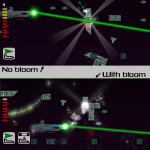 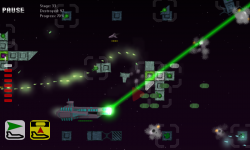 Since this is a shader-based effect, there are differences in appearance between the desktop and Android versions of the game – even between different Android devices! So to compensate, I had to split the original shader scripts used between the two platforms while adding in additional parameters to further adjust luminance/saturation. There will be a bloom/glow adjustment setting in-game, with an option to turn it off for older devices...so yes, your original Droid won't be left out in the update.