Resurrect the classic era of RPGs with the retro parody RPG, Breath of Death VII: The Beginning. Join Dem the Skeleton Knight, Sara the ghost historian, Lita the vampire techie, and Erik the zombie prince as they explore an undead world in search of the secrets of the past. Laugh! Cry! Laugh some more!

Indie Royale third bundle "The Really Big Bundle" has gone live! Get in quick to snatch a great deal!

Firstly we'd like to thank you again for our success to date, with almost 70,000 bundles and over 350,000 games sold in less than a month. We're proud to debut our third bundle -- including five top PC indie games, available at IndieRoyale.com right now. (Those with preorders can download or redeem keys at any time.) 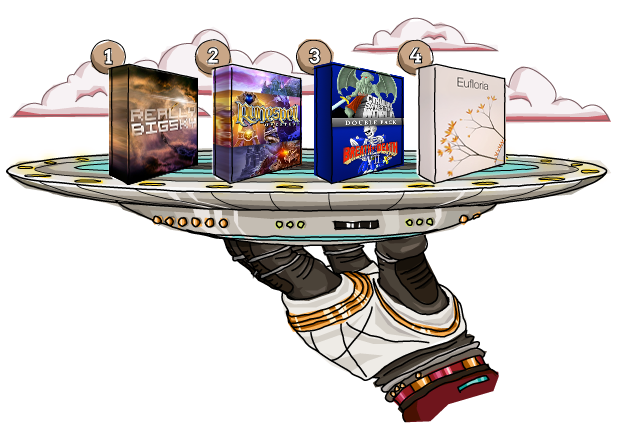 Additionally part of the bundle is the the PC version of Independent Games Festival finalist Eufloria (formerly known as Dyson), an acclaimed 'ambient space exploration' title that's been a staple of independent game showcases over the past couple of years.

Those who preordered, as well as those pay more and get a 'Star' to drop the price during the bundle will also receive a bonus 'thank you' in the form of Fez composer Disasterpeace's chiptune concept music album 'Rise Of The Obsidian Interstellar'. (In addition, all Bundle buyers should check back towards the end of the bundle for further bonuses from the creators of the games included in this pack!)

Once again, thanks for caring about some of the emerging titles we're taking the time to showcase here - please contact us if you have an questions about anything to do with Indie Royale.

And don't forget you can follow us on Twitter, Facebook and via Widgets + RSS for breaking news and info about this and other Indie Royale bundles.

I don't think anyone would expect you to buy it if you cant use it.

Too true! Haha, this made me laugh and hit a good point too.

Oh, I dual boot Windows and could buy it. Thing is, the lack of Linux versions being offered is a true dealbreaker for me.
I want to be able to move away from Windows as a gaming platform, not be chained to it.

So, as a consumer, I simply won't pay for Windows-exclusive games anymore. If you want to keep me as a customer, you'll have to cater to me.

...And I suspect I'm not alone in this regard.

Too bad nobody gives a damn.

Nobody's telling you or the other people to buy it, there's enough where you came from.

No need to be a jerk. Maybe you don't care, but a lot of developers do. Especially since Desura if finally giving devs an easy way to sell games to Linux users. What's the problem with Linux users asking for a little love?

I got it! Awesome work guys!

I preordered bundle, but I see no Linux this time.
Why don't they use this money to port the games?

Some games just can't be ported. Really Big Sky, for example, is powered by Multimedia Fusion, so the only way to port it to Linux would be to rewrite from scratch with some other tool.

Awww I preordered the bundle ... and I really love it, that and Rise Of The Obsidian Interstellar!<3

For once the indie bundle actually has nothing I want. Never thought that would happen. Next thing you know, Steam will finally actually get giftcards like everyone's been waiting for.

As Paradigmthefallen said, this bundle is a dissapointment... Not only it's been only a few weeks since the last one, but on top of that there was yet another HIB in that time frame, and this Really "Big" bundle contains most games featured in last year's indie bundles on Steam, without anything particularly interesting. Sorry, but that's a no-buy for me. And hell! Skyrim and Saint Row 3 released recently. Bad timing, and too many bundles is the problem here

Hmmmm... you know what? I actually like this bundle more than the previous one from Indie Royale. That one had some neat games, but I heard of and do (did) want games from this bundle much more. The only problem for me was that I bought Zeboyd twin-pack only on Sunday as it was on Steam black-friday sale. However, I also discovered that Steam does affect the performance of my old laptop considerably, so paying a little more for DRM-free versions seemed not entirely unreasonable. I also wanted Runespell, even was tempted to buy it on Steam. And now I have it! Besides, Eufloria (aka Dyson) and Really Big Sky are not bad games at all.
Surely, the addition of Dungeons of Dredmore made HB much more epic than current IR bundle, but I am still hoping for some bonuses from IR as well that would help me justify my purchase for myself even more. :)
In general I can say - it is a good selection of games, not something I would call "REALLY BIG", but still.

It is already over, I am afraid. Each bundle runs for 5 days. There will be a new one relatively soon, though.