Bloom: Memories is an epic action adventure game which challenges players to survive against impossible odds as they desperately search for answers.

Hello everybody, my name is José, I am in charge of making Bloom's music. Today I would like to give you an overview of what we're aiming for with the music and give you a few examples of how we're approaching it.

Hey everyone, Dani here (for just a moment) with another update. Thanks so much for all of the support in getting us this far, it has been an amazing week :) If you haven't already, be sure to check out our Kickstarter campaign with 69 hours left!!

But first off...big news! We made it through greenlight!!

Now with less than 3 days to go, we are in our final push to reach some stretch goals.

Speaking of stretch goals, you might have noticed a new one added to the front page -

$65,000 - Prologue Chapter (Unlocked when you complete Bloom on normal). Play as a key character in the Bloom story leading up to the beginning of the journey. Completion of this chapter unlocks new options in the main story on future games.

Also, here is a new concept for that $5 add-on. Of course, there are still plenty more left to do before voting for the top 2 to print! 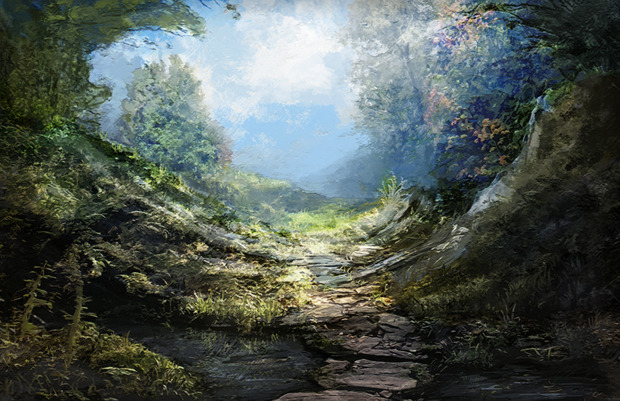 In other news, we have officially teamed up with curse.com who will be providing the Bloom wiki! As more information is released, the wiki will slowly be growing to include all the various bits about Bloom. Bloom.gamepedia.com

Anyhow, with those out of the way, onto the update!

Since the last update was about the programming, and before that the artwork, we thought it would be a perfect chance to cover some of the music (which, to us, is much more than "just music"). So, who better to talk about this than our composer Jose Mora-Jimenez.

Take it away Jose

Hello everybody, my name is José, I am in charge of making Bloom's music. Today I would like to give you an overview of what we're aiming for with the music and give you a few examples of how we're approaching it.

When I first came across Bloom I was totally blown away by the beautiful artwork and the enchanting world where it takes place, I knew right away that this game was going to be something special. From a composer's perspective, Bloom's rich and deep story opens a lot of possibilities for me to work with.

One of the ways we're connecting the music with the story is by assigning different instruments to represent important actors in the game. Let's look at the main theme for example: In this track we can already hear the instruments that will represent some of the main characters in the game.

This track was one of those cases where music ideas came very fast and in a natural way. While in some cases you need to sit at the piano and "search" for the right melody, in this case the main melody just came to me at once.

After some thought I decided to use a viola for the mother's "voice", it has a warm, expressive tone mix great with the clarinet, which is the main characters instrument. In the track, after a short harp intro (that for us represents the forest and nature), I introduce the viola (the mother) and then the clarinet (the main character) , for me it is like mother and child in a dialogue. The clarinet responds to the melody played by the viola. The viola continues playing and the melody is then taken over by the whole string section. After the melody has reached a climax the music goes quiet and delicate again and mother and child "talk" for the last time. For me it's like the mother is leaving her child behind and going on to do what she must...but he's not truly left alone, the mother and Ilana are watching over him and continue playing softly till the end...

Another example where you can see how we're using the music to enhance immersiveness in the game is during "the Bridge". The bridge is filled with life but it is also rather mysterious and seemingly empty. In order to express this with music, I make a "parallel" version of the track where the instrumentation changes so it gives this empty and ethereal feeling.

Take a listen to the track below to get an example of this shifting. In this track you can hear how during the bridge the harp and strings play only harmonics (harmonics produce soft flutelike sounds when the string is lightly touched at specific points) and how the whole track gets a distant empty feel. As the player jumps into the bridge the music shifts from one track in the other enhancing the effect of this transition.

We have many other ideas we want to include in the game, I'm very excited to see where this goes! We are also very lucky that James, our programmer, has a lot of music experience himself, so I can easily communicate my ideas to him and he can make them happen in our game engine.

I hope these examples have given you an idea of what you can expect to hear in Bloom. We will keep doing our best to make Bloom the best game it can be. Thanks so much for your support! :)

As you can see, Jose is also pretty passionate about what he does. And, like he said, we have plenty more planned to push the music even further (remember, one of our big influences is Loom). The key is simply in using these elements to enhance the work that the rest of the team is doing, working together to create a game greater than the sum of its parts.

Also, since we are on the subject of sound. I also wanted to point out someone who was a huge help to us getting the alpha ready. Though you probably have already met him, since he was the voice of Pilum, Hayden Black! The star of the pretty funny show, Goodnight Burbank ( Goodnightburbank.com ) and also appears on BBC from time to time. Check out his twitter for a ton of hilarious jokes ( Twitter.com ).

Anyhow, as always, thanks so so much for helping support us and making this Kickstarter a success.