Mouth recorded Sounds! The others are placeholders, not otherwise!

Colors! Yes many of them, called "binary LSD"

Fresh stuff! Because it was created for Beams!


Fun! I had some while doing, others will have some while playing Beams, that´s fair.

Closed Alpha means in my/Beams case, that my composer and some tubers get the Demo first.

After some tests /min/spec*performance ( and updating with polished content), i will release the Domo for free and start then Greenlight process.

Demo will be free in any case and contains one playable Track with competition functionality *fingers crossed*, but perhaps i could include more free stuff for the Demo later.
We will see :)

Here you can see, how the Startscreen/Main Menue will look in Beams, yes it's some sort of interactive.
Mouselook activated, other functions/movement locked.
Tell me, what you think. 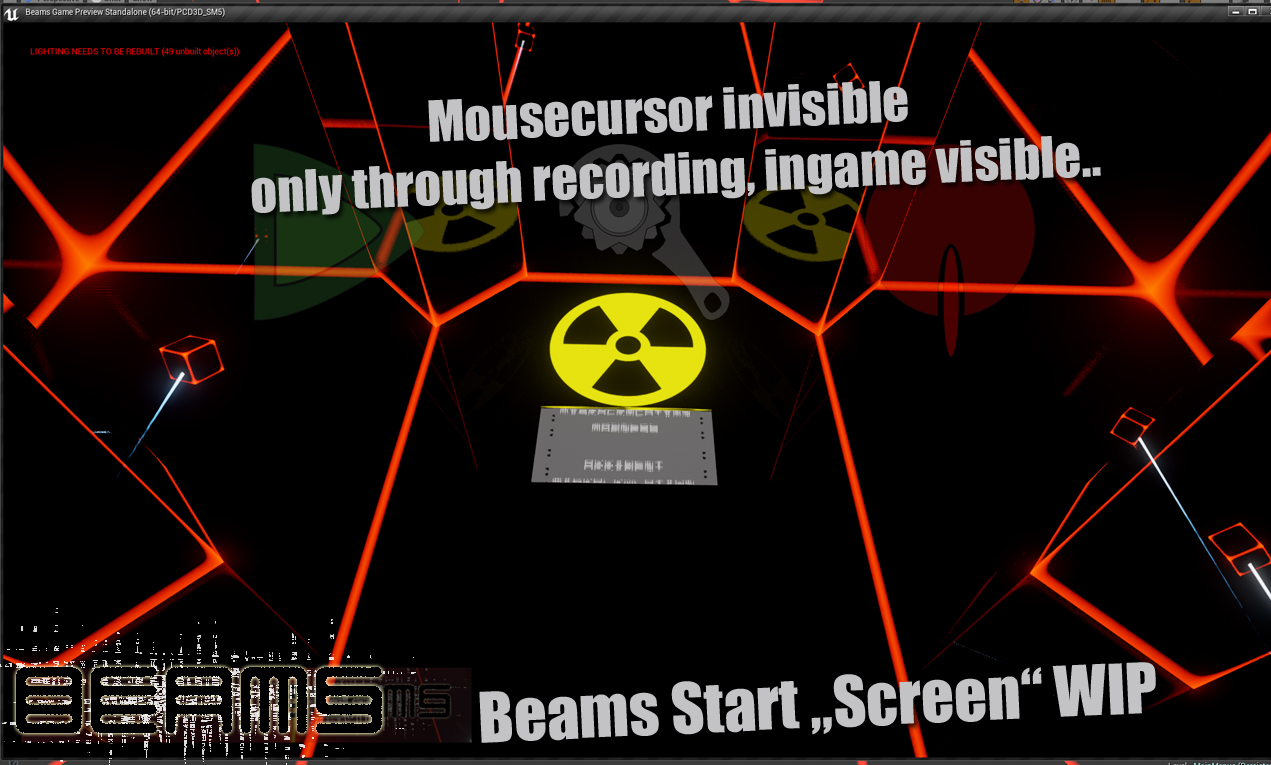 Here a Video about devprocess of destroying stuff and feeling like Dualzan!

Hi some overall improvements in Beams and a fresh gameplayvideo for your eyes only. ^^

Do you need someone to give you his thoughts, reporting bugs and giving tips?

Thank you very much for feedback.
About testing-offer.
Not to far away i could use some testers, yes.

But i have to talk with other more experienced devs(then me), which step comes first.
I do not want to crash my little project, because it makes me happy.
Send me a PM with "Secret Sauce Tester", then are the chances are better, i find it again. ^^
Question!
Do you like the inventory idea?
It has another deeper sense too. For that i mesh something now, and will post a sketchy pic soon. *pshhht* has something to do with shields. :)
sincerely Bauch

I will send you an Pm tomorrow!

About the inventory, i like it! Maybe let people Search for an item to open something?

No i mean you Search (in this case) a battery, to put it into a machine so you can control it. But you can't put the battery everywhere so a kind of puzzle which item needs which machine.

Ahaha and you need a healthpack, but it's a healthpad, you can "put" it in your weirdventory. ^^

Yes different types of batterys for different tasks would be nice to complicate stuff!
Like that :)
Load all your Keys into the inventory and start your travel. ^^

Awesome videos, will you get us some downloads to try?

@etsvigun. Thank you so much.
Feels so nice that more and more ppl seem to like the concept of Beams(yes it has one).
Launch/Test/Demo:
I plan to finish a playable Demo whith a basic "track" first, to gain somefeedback and suggestions perhaps.
Then players will easy get rid of mechanics and understand that concept and i hope they will like it.
No Book needed to play it, but skill in timing and logical thinking - routeplanning - learning patterns of ingamemechanics.
Launch will be on steam (could be here too).

Demo is planned as FREE in any way,
but i put not all stuff i still have into, some only as decoration.

Someone asked me about the PRICING for my game and i am not sure about that.

I bought so many bad games in the past(good ones too) and for the bad ones i paid around 40€ each!

With beams i have ten times more fun, like with one of the many bad games i bought.
I think 400€ would be a bit to greedy, but 250€ for full product should be fair or not?
^^

Reminds me a lot of tron, love the style keep it up.

Hi and thank you very much for your Feedback.
It looks in some way cold, but not too empty.
Sincerely :)