Battle Cry of Freedom, brings brutal real-time first and third person combat set in the 19th Century America, presenting players with the opportunity to re-fight the American Civil War as either the Union or the Confederates. It features a wide range of Troop Types, ranging from the common soldiers to musicians and artillery, all with their own purpose and tasks.

Today we release another large patch for Battle Cry of Freedom, introducing an all-new Era and Score system as well as the Prussian Faction for the Age of Napoleon mod.

Welcome back, everyone! Or should we say "Guten Tag!"? Today we release another large patch for Battle Cry of Freedom, introducing an all-new Era and Score system, several new Confederate Regiments as well as the Prussian Faction for the Age of Napoleon mod. 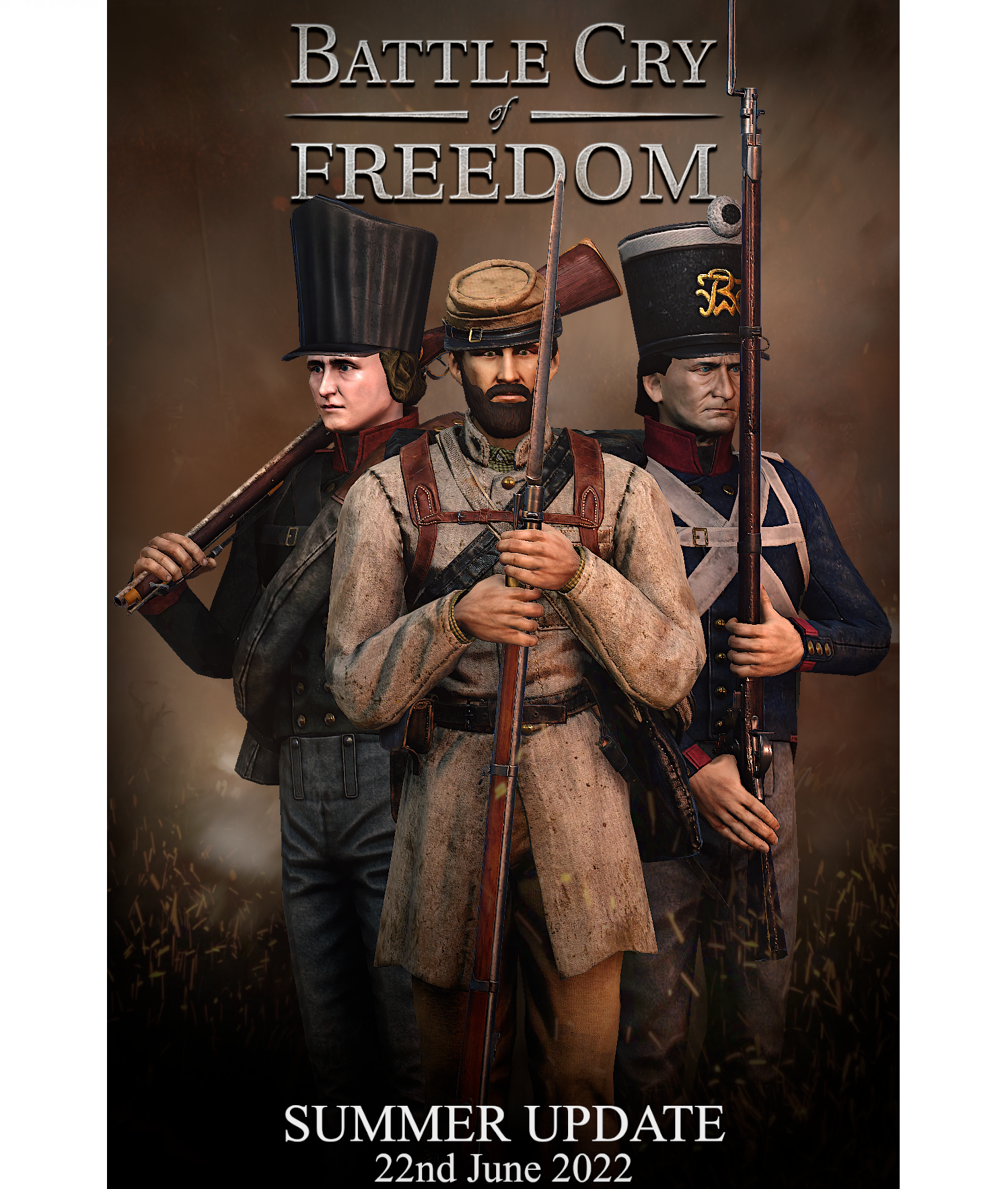 As usual, we will go over some of the more important changes and additions in detail. You can read the full changelog at the bottom of the Blog Post.

This Patch sees the introduction of not just one, but TWO brand new Confederate Regiments which will even out the previously lacking Confederate roster. The Confederates now also have access to Confederate Frock Coats of different shades and patterns as well as a bunch of new buttons and brass insignia. 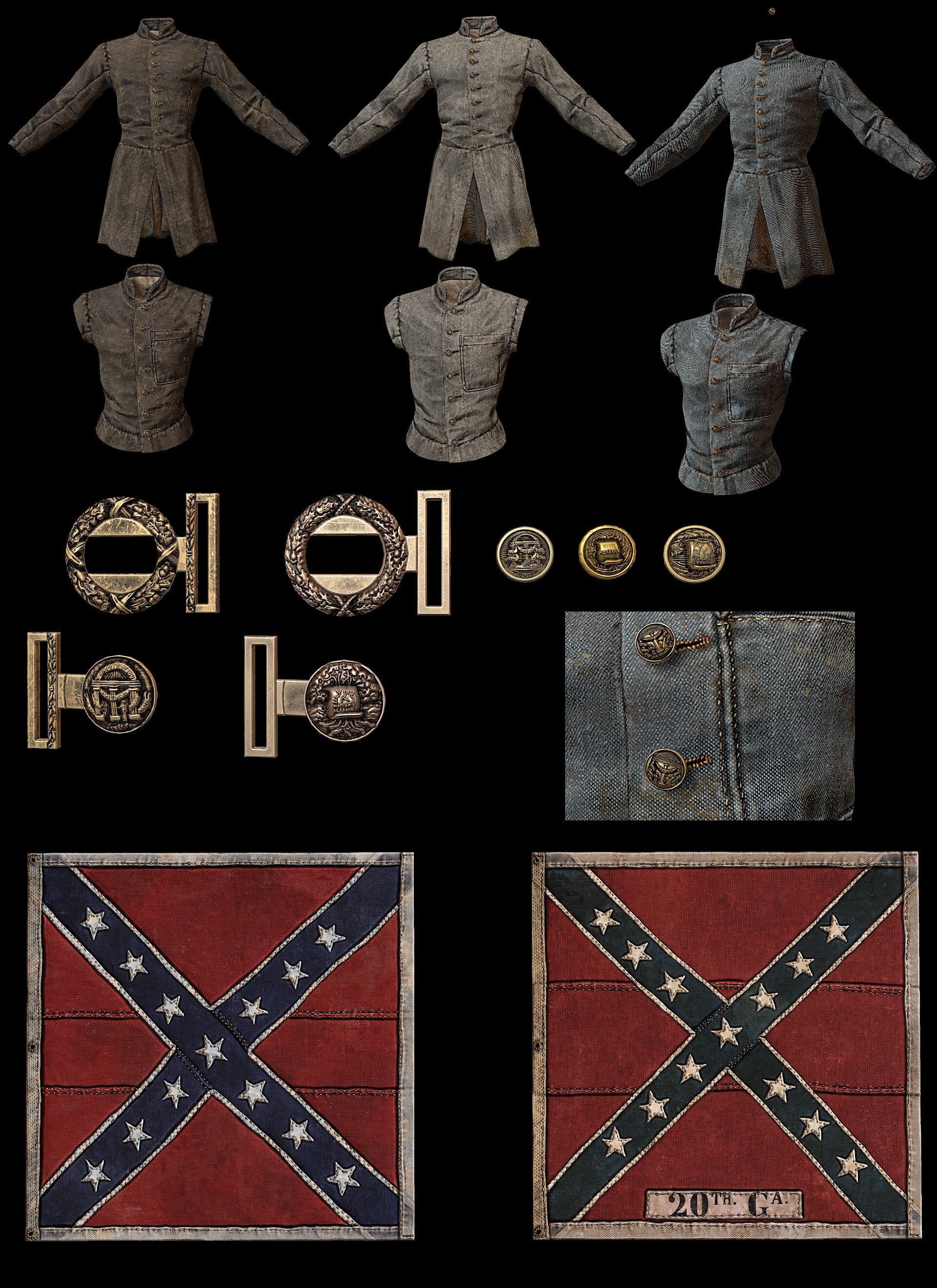 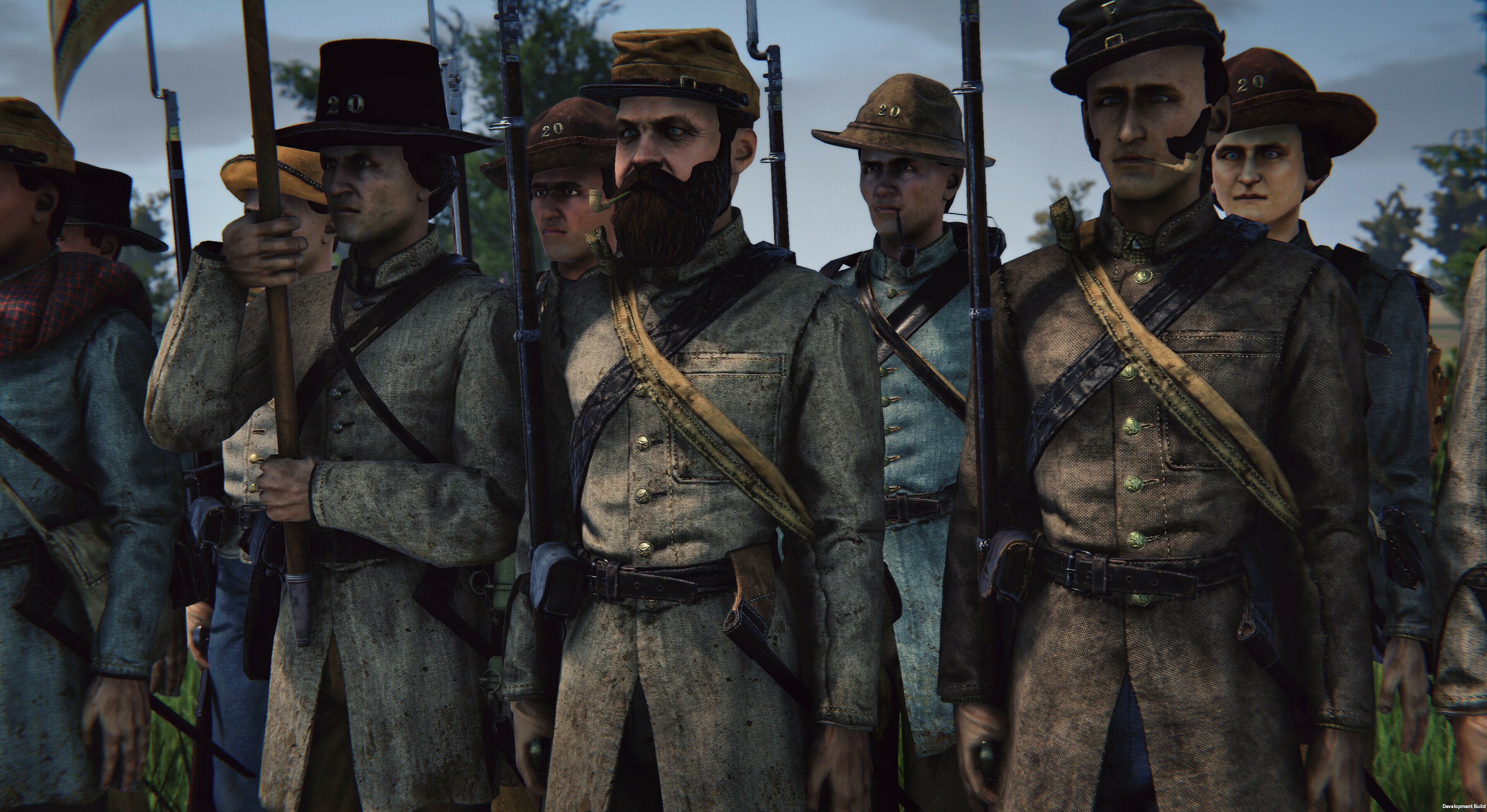 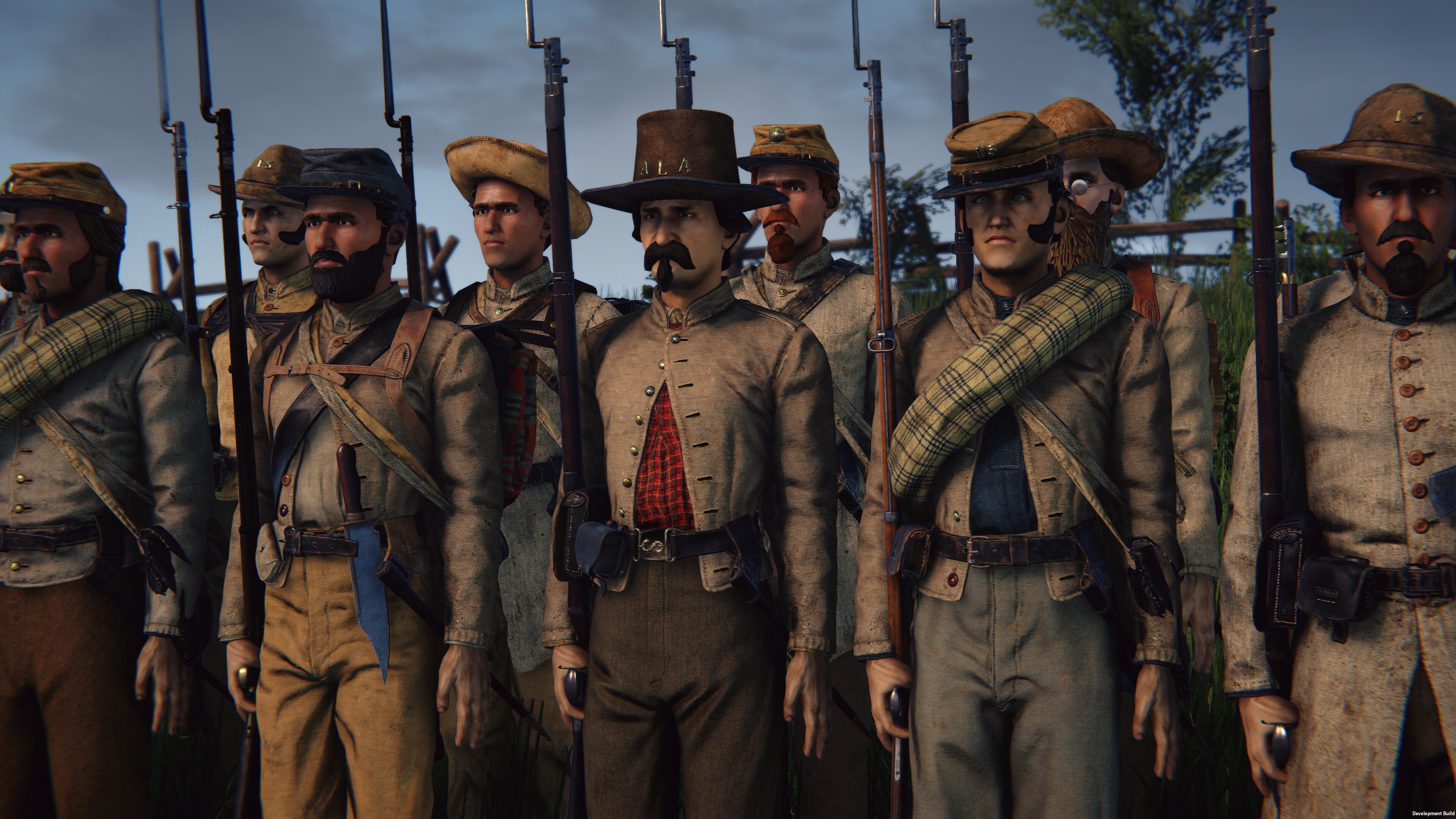 We have introduced a brand new Score System to the game. Players will now accumulate score points for any positive (or negative) actions they perform in the game. The Scoreboard will now default sort players by score. This also means that support classes, such as Musicians, Flag Bearers, or Artillerists will get Score points for helping friendly players. Assists are now also a thing, and players will get bonus scores for various other actions they perform.

Here is a full list of the Score Points players can gain: 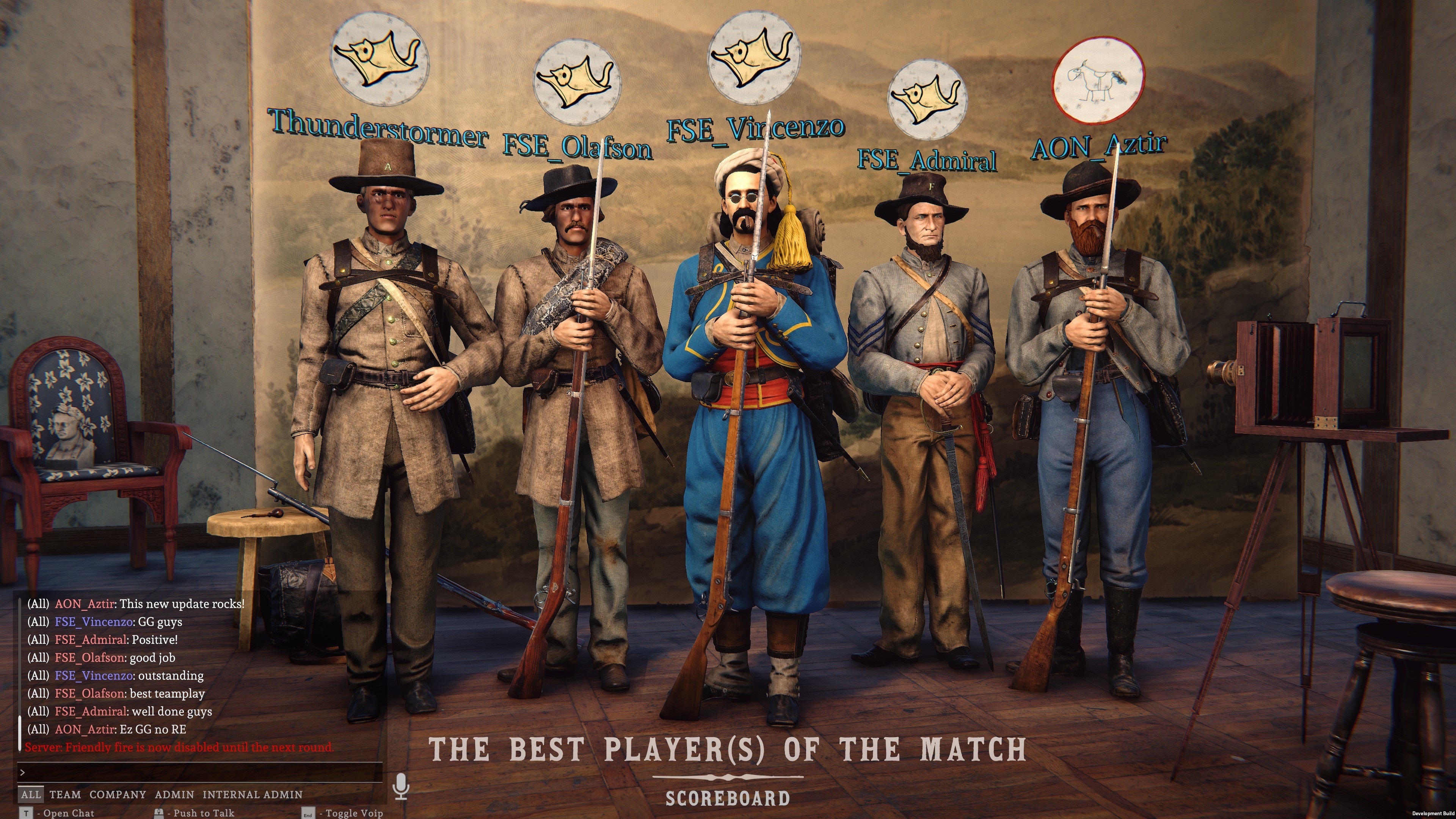 Additionally, instead of just ending a round when it's over, we have added a small UI that shows the 5 best players of the match and allows players to type something in chat and/or check their own Score for a few seconds before the round ends and the map changes. So better step up your game, so you can make it to the top 5!

We have reworked the Officer Order System from the ground up, to be more accessible and user-friendly, while at the same time providing more features. One of the most requested feature was the ability for officer to draw lines and give orders on the ground. With todays patch, this feature has been fully implemented into the game.

Officers can now open their order screen by Pressing the "Mouse 3" Key. This will open a small window displaying all the possible orders an officer can give. Upon selecting one of these orders with either the mouse or with the corresponding 1-8 Keys, the officer can place the order in the area he wants to give the order at.

The melee system has seen a major overhaul. We have completely reworked the Bayonet Up- and Down-Swing animations and fixed various smaller issues with the Melee System. In addition, we have adjusted Chamber Timings, Stun Timings, and attack lengths. We have also worked on fixing some of the Player-Desync that has been occurring during melee fights and hope that it should happen much less frequently now.

In Commander Battles, if a player leaves the server mid-round his AI-Soldiers will now regroup themselves with another player's company, temporarily boosting his numbers. This should hopefully fix the issue that a player that leaves the game mid-round will throw off the balance of the game entirely since his AI-Soldiers are no longer being commanded by anyone.

In other game modes, Rogue Bots can now be rallied by using the "Follow Me" (F1 > F1) command. Rallying Rogue Bots will put them under your command, just like in Commander Battles.

New Maps on the Official Servers!

We have added a number of new maps to the official All Modes and Commander Servers. Join a match to check them out! Big thanks to our Community for producing these absolutely fantastic maps!

Prussia has arrived on the battlefield! Less than a month after the release of the Age of Napoleon modification for Battle Cry of Freedom, todays patch officially introduces the Prussian Faction to the game. 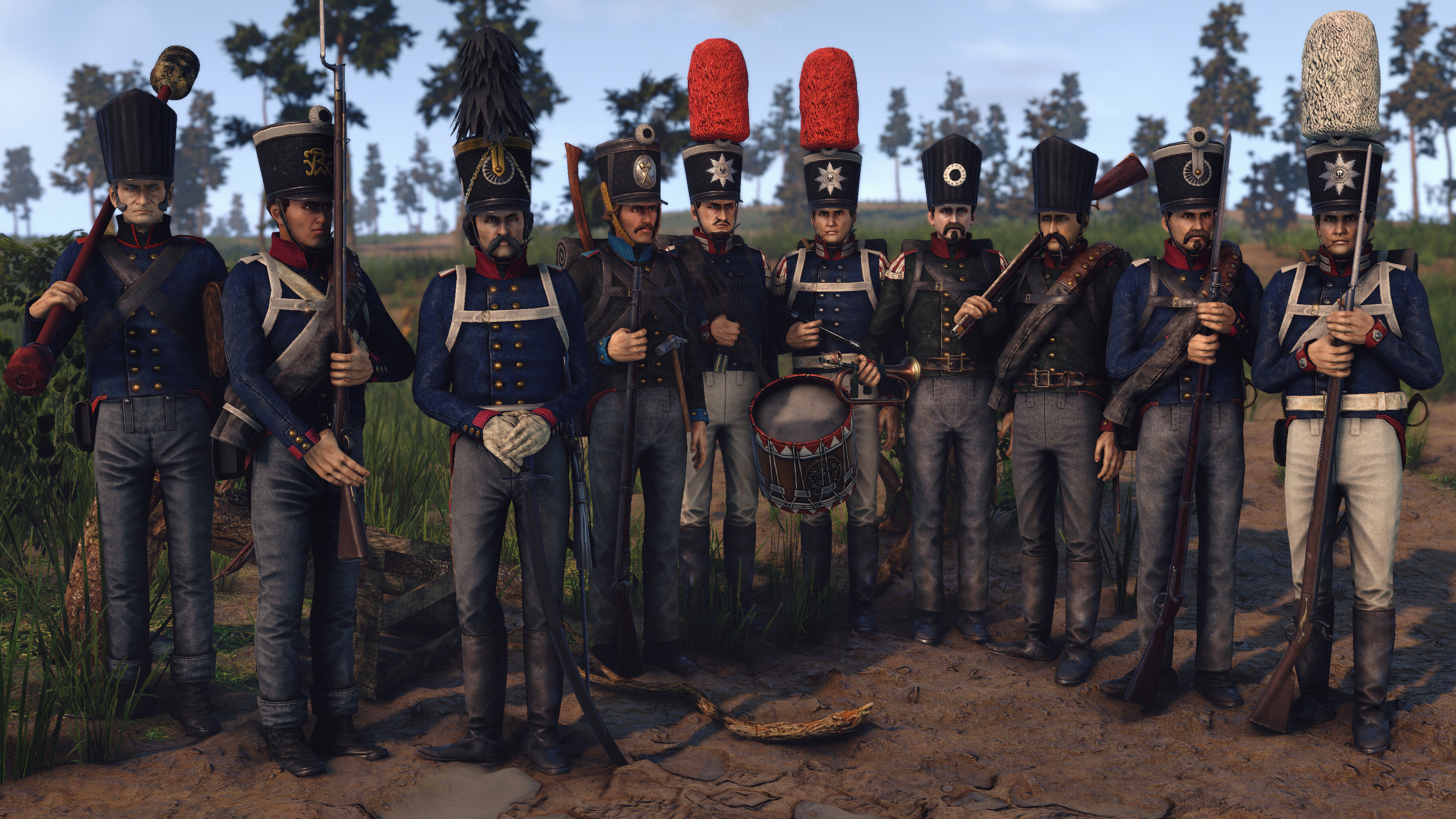 Prussia is fully voiced and even has its own musicians that play historically accurate tunes.
All Uniforms in the Mod are customizable, although the customization options are not as extensive as in the base game.

Prussia will be a great addition to the game and will be fighting alongside Great Britain against the French Empire and their allies.

The following regiments will be included:

In Battle Cry of Freedom Admins can now choose from one of the 4 Eras included in the game.

Since the game now has more than one Era in the game, we have decided to rework the way that players/Admins can choose between the various different Eras in the game. 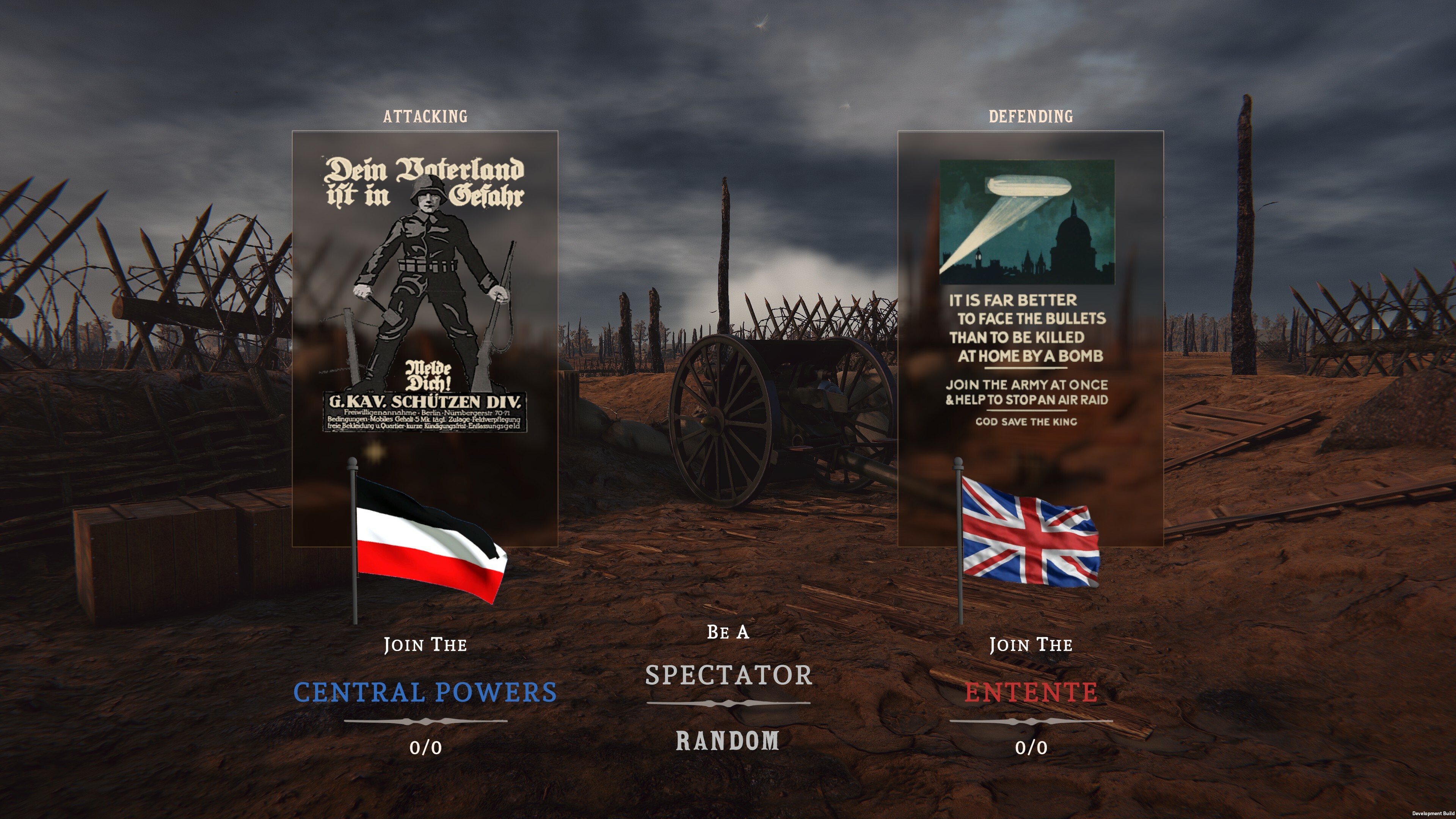 We have reworked the system entirely to be as user-friendly as possible. Admins can now decide to play a certain Era in either the map rotation in the ServerConfig.ini or they can change the Era from the in-game Admin Panel, when changing the map. What this means is that from now on, all maps can be played on all Eras and that Admins no longer have to fiddle around with the Server Settings and Map Settings to play a certain Era. 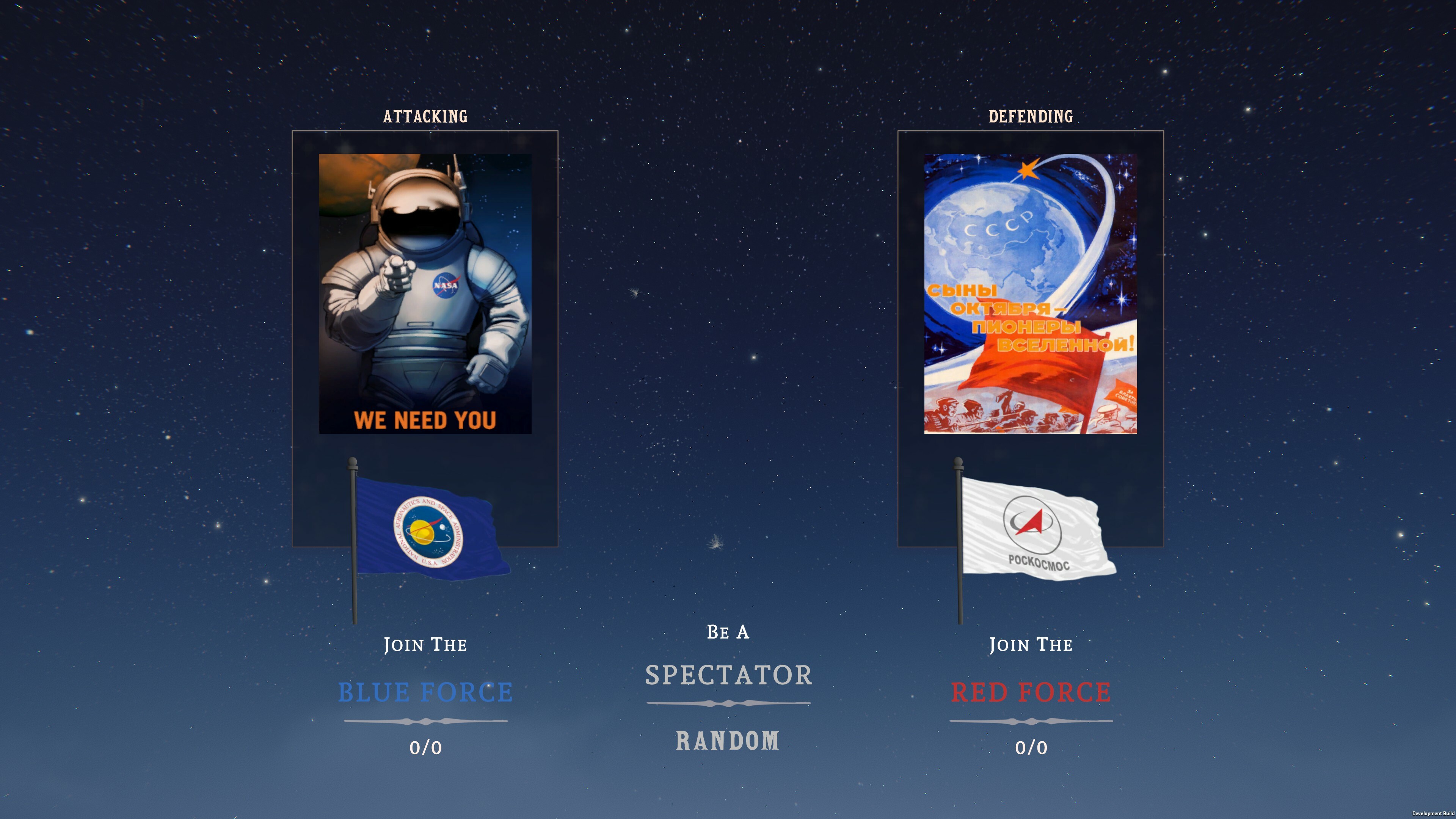 We have coded the system in a way that makes it very easy for us to add more Eras to the game, so if any of you guys have suggestions or want to see your own mod added to the game, feel free to approach us!

For those of you who are either new or don't remember, the World War One Era has been in the game for a while now. It features two factions, a number of different rifles and ammunition, usable Tanks, Machineguns, Mortars, Quick-Fire Guns, Poison Gas, and more.

Read our previous Blog Post HERE to check out what it's all about.

Players playing the Space Era will now see themselves fighting for either NASA or Roscosmos, trying to secure valuable resources on the Moon and Mars.

The new Era will feature a number of unique Plasma-based Weapons, such as Plasma Pistols, Rifles, Knives, and Swords. Additionally, Astronaut officers have access to Jetpacks, which allows them to fly for a very short distance. 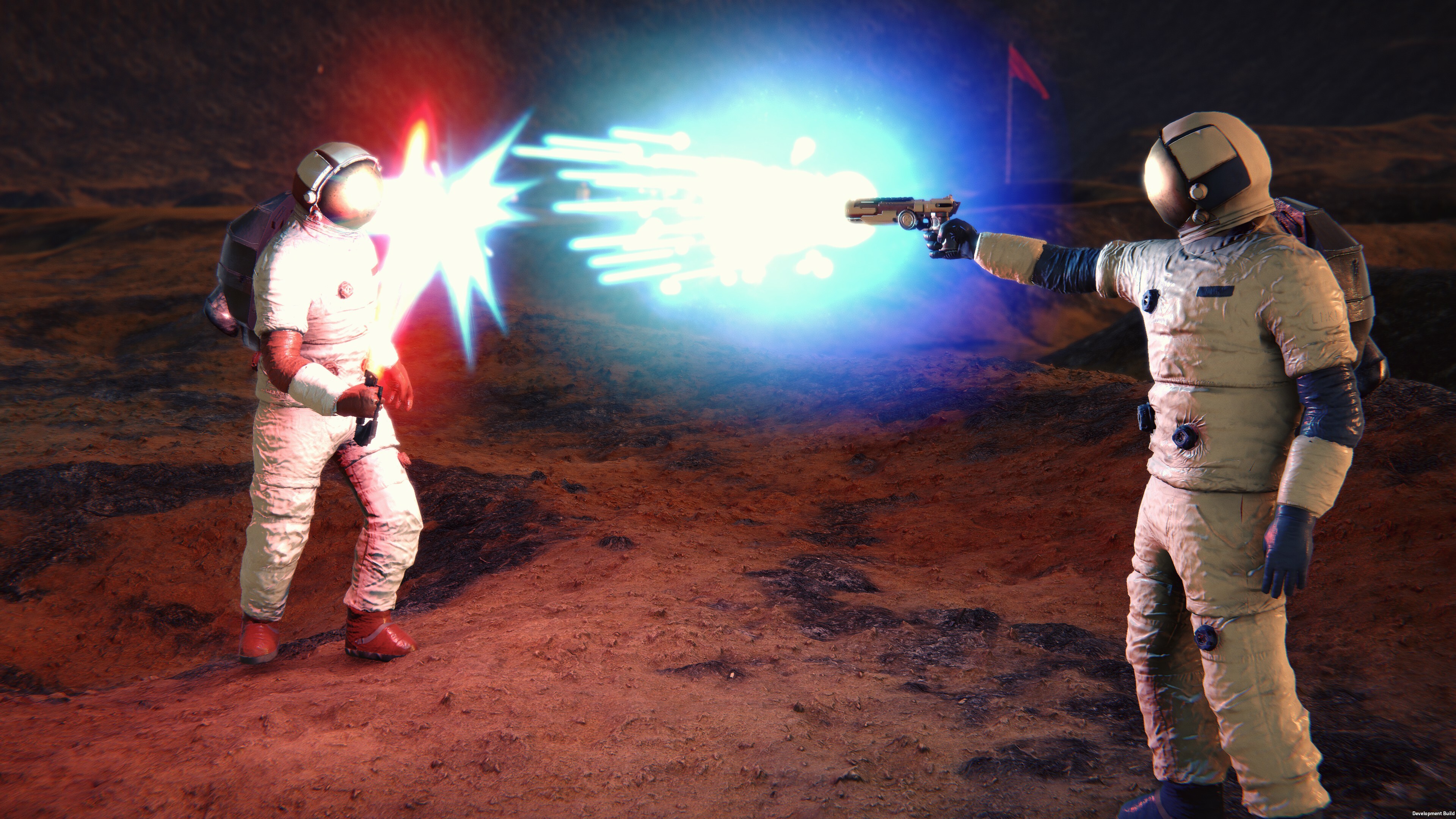 Astronauts will also have access to Hoverbikes, extremely fast-moving vehicles that hover over the terrain and allow for fast transportation from point A to B. 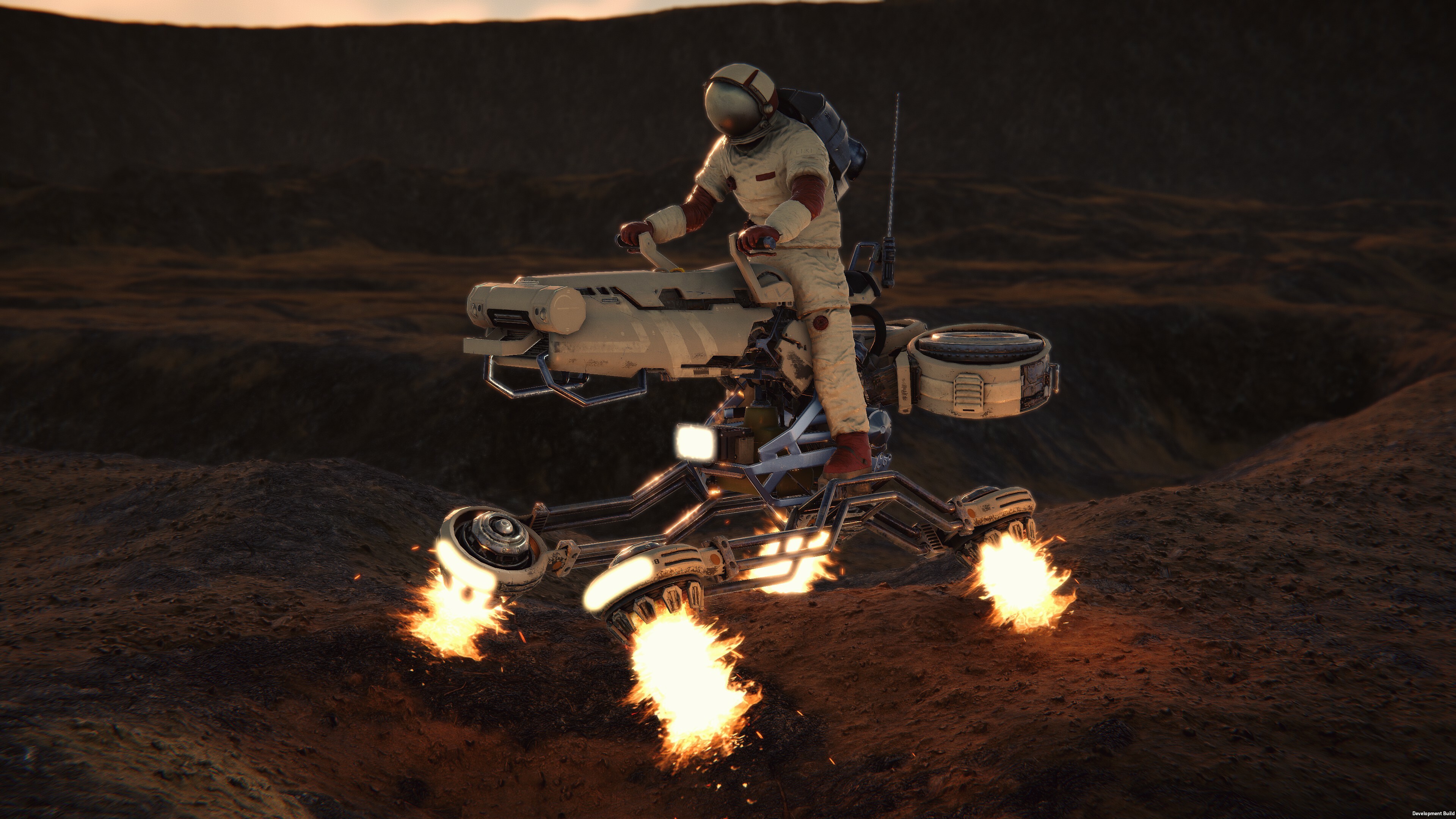 We will be hosting another large-scale Linebattle Event.
The Event will take place on the 26th June at 9:00 PM CET (3:00 PM EST).

This will be the perfect opportunity to stress-test our Server again- We managed to reach 500 players last time. Our Server can now theoretically hold up to 750 players, however, we do not know where the current practical limit is, so we urge everyone to attend the event! Let's find out how many players we can get on the Server before it starts to be noticeable!

Any Regiment is welcome to attend! Pre-Event Signups can be done here: CLICK ME

The Rules for the event can be read here.

We are happy to announce that the 8thVA and Thomas Legion are starting an 1863 Grand Campaign Civil War Event 8pm EST/1am GMT on Saturdays starting June 25th!

The Campaign Event will allow each team to decide how to win the American Civil War by picking where to attack and how to gain territory. The campaign map will include Virginia, West Virginia, Maryland, Delaware, and parts of Pennsylvania with many modded maps to represent these areas.

Each team takes turns deciding what tile to attack and how to achieve ultimate victory. The map contains 38 tiles each with its own unique terrain and perks.

Each Saturday an hour-long battle occurs to determine if a tile is taken or successfully defended. The map includes the states of Virginia, West Virginia, Maryland, Delaware, and Southern Pennsylvania. Each team has a limited amount of Artillery and Sharpshooters, make sure to use them carefully! Capture the enemy colors to gain points! Bonus cards are also a feature, these can be earned in specific battles and allow for various hidden actions!

Are you interested in attending huge organized Linebattles with hundreds of players? Then join our Discord and enlist with one of the Regiments (Clans) hosting organized events!