Your country needs you!

Take to the sky in your trusty biplane and join ridiculous battles against other pilots.

In the world of Baron, pilots are animals, and aerial weapons include Giant Anvils, Flamethrowers, Freeze Rays, and a handful of Stinky Fish!

Which famous fighter ace will prevail?

Up to 8 players can battle either all-on-all or in teams. You might need a longer couch!

Each with different characteristics and handling.

Easy to learn, but with a depth that will take months to master. 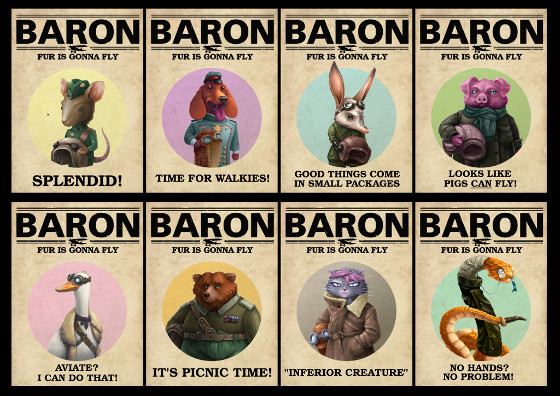 Uniforms, aircraft, and landscapes capture the spirit of the First World War era.

Characters are celebrities, followed keenly by the world watching on. News is reported by dynamic newspapers that are updated according to events in the game.

Soundtrack features 10 original 'old-time' songs including a victory song for each character.

To promote Baron: Fur Is Gonna Fly and grow its popularity (top games), use the embed code provided on your homepage, blog, forums and elsewhere you desire. Or try our widget.

Fursan al-Aqsa: The Knights of the Al-Aqsa Mosque® is a Third Person Action Game on which you play as Ahmad al-Falastini, a young Palestinian Student...

Run Zombie Run is a 3rd person co-op multiplayer shooter. There are different game modes such as trigger mode, deathmatch, etc. You choose a character...

Starting of as a late Mod to the Mount and Blade scene, we've decided to create our own title - Whigs and Tories. read our articles to learn more or follow...

Delta Squad is an arcade game that will bring back memories to nostalgic players that grew up playing games in the 90’, but with a fresh looking for...

Ludicrous is a 3D multiplayer side scrolling shooter for the PC and Mac, featuring detailed 3D graphics, an arsenal of weapons, items and boosts, a detailed...