Bank Job is the newest title being created at Screwtape Studios. The touch-to-stop running game follows our the lovable bank robber Paulie Barboza as he tries to escape a high security bank. Collect loot and avoid obstacles as you get as far through the bank as possible! Bank Job is being created by: Anthony Wood Megan Summers Ben Wiessbock Michael Freeman Chris Cleghorn

The much anticipated new game from Australian Devs, Screwtape Studios, is now available for download!

After many months of work, Screwtape Studios is proud to announce the release of Bank Job, an iPhone game that's easy to pick up, but really hard to put down.

Play as Paulie Barboza, one of the toughest crims in the biz, as he makes his escape from the worlds most advanced high security banks. Collect the loot as hit rushes towards him, but be careful not to hit the hazards. They're designed to kill you, so timing is everything. 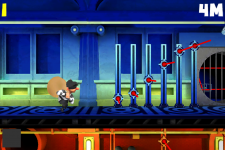 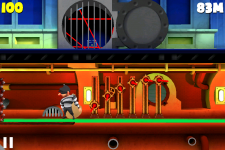 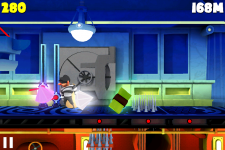 Bank Job contains 60 objectives, that range from the simple to the agonising, and a range of stylish hats that Paulie can wear to make the job a little easier. Wear the Viking helm, or the Lucky Irish Hat? Maybe you'd prefer the Kings Crown so you never have to risk your neck for a piece of loot.

Bank Job is available for the iPhone on the app store now, and coming soon to Android devices!

Get it now at:
Itunes.apple.com

Find out more about Screwtape Studios at:
Facebook.com

Awesome game a must play!