Action RPG with an slightly urban feel, heavily inspired by games like The World Ends With You and the Shin Megami Tensei series. 2D art, with randomly generated dungeons, without random encounters. battle system is similar to some old school games like the "Tales of" series and Star Ocean. Music by Kevin Macleod. The ideas exposed in the game are in no way endorsed by the creator and are purely fictional.

The latest on BAEL's Children development

I'm currently working on the development of the first chapter of BAEL's Children: the main story of the chapter is around 20% done and the overall system structure of the game is around 70% done. I'm currently working on the Random Dungeon System, making the dungeons more "organic" and also creating things for the player to collect, so the dungeons feel a bit more like explorable environments. I'm going for something lightly similar to "Fushigi no Dungeon" style games, where each dungeon floor has random things to collect, scattered through the maze. Lately I have created two new enemy types and one new boss, all for the first chapter. This chapter will likely contain 3 bosses in it's main storyline.

And also, after receiving player feedback, I have decided to upgrade the graphics, to make it more detailed and less "chibi"-like, since it wasn't getting good impressions. Check out the comparison below, for some characters of the first chapter:

And also an example in the story screen: 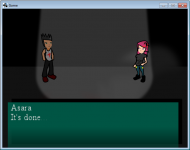 So, is the art better? Do you think it's still not good enough? Drop me a comment with your thoughts!

The Battle Demo has now arrived in to the Google Play's shores with slightly better graphics!

BAEL's Children first public demo and the next steps!

The first public demo release of BAEL's Children is released. Come join our mysterious hero as he advances through a 10-floor dungeon with a boss in the...

A short prologue to the main story. Play through the eyes of Jade, a young girl who has a desire to make life better in the slums of Rivercity. With a...

Updated graphics, a system of upgrading skills and multiple difficulties! Can you unlock and make it through hard mode?!

10 floor dungeon so you can try out the battle system! :) I'm dying for feedback!