Players are always looking for unique and interesting game play. Well, it doesn't get much stranger than Badminton Warrior. In this 2D side scrolling, action adventure, you will use badminton techniques such as the clear, drive, and smash to defeat your enemies. Most of these enemies are sports themed including killer curling stones, missile launching sumo bots, and club throwing rhythm gymnasts. Sixteen challenging levels await you on this crazy adventure to save your friend from the supreme evil... the Bellighost. 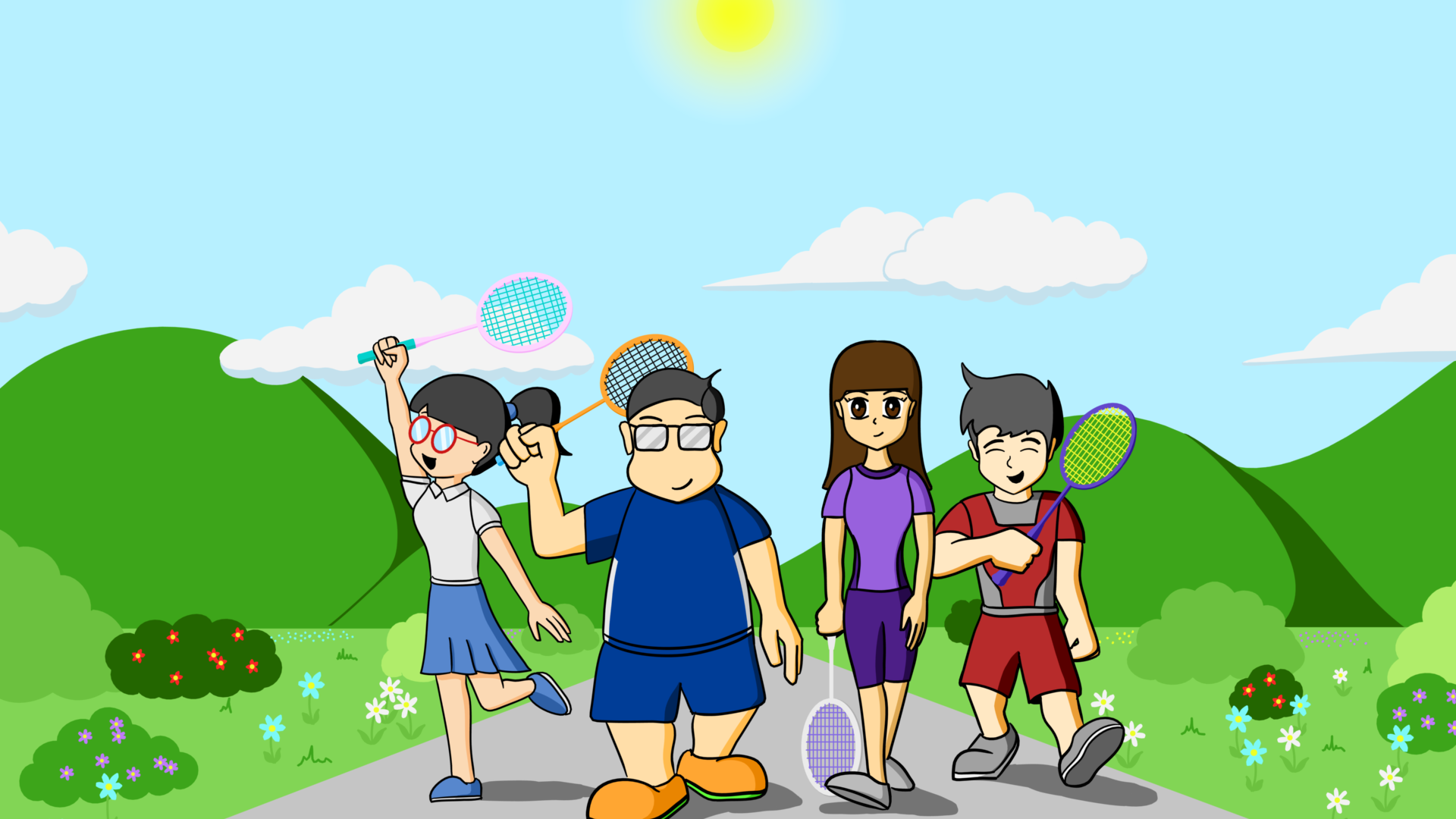 One fine morning, Ral, Mindy, AJ, and Jing go to play badminton when an evil being appears and kidnaps Mindy. Things seem pretty grim until a mysterious, old man named Lao Pi materializes and offers Ral an enchanted badminton racquet. He explains that the racquet can deflect any attack back at an enemy but cannot do direct damage by itself. Determined to rescue his friend, Ral embarks on a journey which will take him from the clouds in the sky to the depths of Hades.

• Unique gameplay where you damage enemies by hitting projectiles at them with your racquet, but you cannot damage anything with the racquet itself.

• Crazy cast of characters including a hockey player who thinks he is a god, a lacrosse player running an insane asylum, and a basketball player who turns a championship trophy into his wife.

• A humorous, outrageous story that does not take itself too seriously.

Most levels have a unique feature to them that is utilized to vary the gaming experience. The following are some examples:

The basketball level lets you bounce projectiles to take down enemies.

You can use teleportation to your advantage in the space level.

Who wouldn't want to play with a spiked tether ball?

For more information, please click on the links below or checkout the image and video sections of this game.

If you have any questions or just want to say hello, you can contact me at contact@badmintonwarrior.com, and I will try to get back to you as soon as I can.

I haven't been posting anything lately because I spent the last two months working hard on a major new update for my game. Now that it's finished, I am proud to present Badminton Warrior Chinese New Year Edition just in time for the holidays. This version contains a completely new stage with firecrackers, red lanterns, dragons, and more. Enemies have been redesigned with a Chinese New Year theme to them plus an additional enemy type was created just for this level. There is also a brand new boss battle at the end with a funny twist.

When I first thought of doing this, I wanted the Chinese New Year level to have a special characteristic similar to the other levels in the game. Of course the first thing that came to mind was firecrackers. I was inspired by the Mole Knight level in Shovel Knight and decided to create firecracker walls and platforms that could explode. I didn't want the gameplay to be just a carbon copy of Shovel Knight, though, so I incorporated these obstacles in a way that will give players a unique experience.

A brand new enemy was created that only appears in this level. I named him firecracker kid, although technically he's a robot. He attacks by throwing firecrackers and will adjust his distance depending on how close or far away the player is positioned.

I did research before creating the new enemy designs so they would have the appropriate aesthetics. For example, the tennis launcher is green and yellow because those are the colors traditionally associated with bad guys in the world of Beijing opera. Some people may wonder why certain characters such as the panda bear and Monkey King, traditionally seen as good things in China, are cast as enemies. I really hope people take the time to read the story rather than sending me messages on how I don't understand Chinese culture.

Here is the Dragon

No Chinese New Year celebration would be complete without a dragon. However, this dragon looks like he has seen better days. Those who played through the original game will recognize this funny character who seems to have problems with self-esteem and insecurity.

Celebrate the holidays by smacking projectiles at opponents, testing your skill against new obstacles, and experiencing a lighthearted story that will put a smile on your face. I hope players enjoy this new edition!

Based on player feedback I made updates to the game. The big changes were to the boss battles and an added tips/hints feature.

Currently out as an early access title with a FREE DEMO, I'm looking for feedback on Badminton Warrior.

A short article describing how teleportation is used in combat.