Bacillus is a microbiology inspired video game. Players take control of a microbe with the only goal of surviving in an evolving world. The game attempts to show the diversity and excitement in the prokaryotic kingdom, and in doing so, incorporates unique scientific principals into the game. For example, each bacteria has a genome, a sequence of DNA which accurately evolves during the course of the game. The world is fully explorable with plenty of unique "mircro" environments explore. And your bacteria is madly customizable with 50 'evovlable' traits. This game takes simple Pacman like gameplay mixes in some hard Science ,"RPG elements", and a sandbox world to create an experience which literally comes to Life.

The developer of this game needs $1,500 to finish his game. Rewards include designing and naming your own species. The game needs funds so it can develop better animation, provide some music, get a copyright and some other miscellaneous fees. The game has an accurate model for evolution built into it, what more do you need in a game?

The time frame for the kick starter campaign has been decided, and it starts and end on two unique days.

Read this article I wrote going over 5 cool and exciting updates to Bacillus recently done.

This looks like a nice solid game and I would love to try it out. But i have a couple of questions:
-In future updates will you be able to change the shape/looks of your bacterium?
-In the end will it be for free or like 3-5-10-20 bucks?

I was just naming Dwarfs in Dwarf Fortress off of Bacillus today!

I am now compelled to give you moneys. Though I do have a few questions. Do we choose which species (and genera) we play as or are we forced into playing as Bacillus (subtillus)? If we do get a choice do different species (and genera) have different genus and species specific traits? IE, all Bacilli would have the capability to create endospores, but another genera would have microbial cysts and some other trait instead (since microbial cysts are kind of a step down from endospores).

If we are forced into only playing Bacillus do we get to play in any other forms? IE, with disrupting the right gene sequence, we could potentially 'play' as a spherical bacteria. Though, I'm no expert so I'm not exactly certain how that would affect gameplay, but I imagine several play styles could easily develop out of that capability and what it would entail.

Right now you start the game as a single, basic bacillus shaped bacterium. The only genes you have are the ones required to give you the very basic ability to survive, and to get other genes you must evolve. So getting a special gene like endospore (or the 20 "non-core" genes)will require a bit of luck and evolution.
In other words, you start as a very basic bacteria, which can evolve into something more like a Bacillus, or enteric, or thermophilic bacteria.

But that's what is in the game right now. There are a couple of updates I'll be putting into the game after I get the core game-play down. And here's a list of features, related to your questions, that will be future improvements to the game. Listed in order of when I will put them in.

-Different shapes (round = cocci, sprilli = spiral) , this is going to be one of the later things I do, as it will take the most programming. But the other bacteria around you are a wide variety of shapes. The current visuals of your bacteria that can evolve are : Color, size, flagella number, and flagella length.

Side note : DWARF FORTRESS IS AMAZING!

nice game concept, i would donate but i am broke... anyways , i hope that you guys are able to finish this, and i look forward to playing it 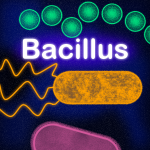