Flagships, enormous floating command centers, can produce some of the ships, but larger ones, like Battleships and Carriers are built in Shipyards. It also acts as floating tech lab, where new units, upgrades and abilities are unlocked.

Shipyards are built on conquerable Islands spread around the maps, along with other types of structures. Such as refineries, that increase the mining yield of harvesting units. Also airfields, that allow the production and maintenance of extra aircraft. And defensive installations, to keep the Islands and nearby friendly ships safe.

Resources are mined by extractor-structures: Ore extractors on land, and Hydrocarbon extractors in coastal waters. Resource deposits vary in mining yield: Rich, Moderate, Poor and Depleted, each producing half as many resources as the previous one, and decaying over time.

The game features three unique factions. The Tenorran Defense Navy, TDN for short, the Coalition Armada, commonly shortened as CA or Coalition, and the Ravagers.

The Tenorran Defense Navy are the Naval branch of the Tenorran Union, a federal union of advanced nations. In true modern navy style, their units are fast, and primarily use missiles as weapons, as well as electronic warfare. The fight at long range, but their range comes at the cost of armor. Their biggest strength is their powerful air force.

Slower, but very well armored, is the Coalition Armada. a multinational navy part of the Southern Coalition, the second major power on the planet. Their ships trade mobility and range for armor and firepower. Their Submarine fleet is unrivaled, and their ships are more reliant on large cannons than missiles.

The Ravagers are an armada of drones of unknown origin. Their units are extremely fast, and have shields to protect their comparatively weak armor. They fight at very short ranges, where their ships can put their high damage potential to use.

Ardent Seas takes place on the planets of Pyrios and Tenorra, two Earthlike ocean worlds in the same binary star system. Pyrios orbits a Gas Giant around an unusually calm Red Dwarf, and is a recently established colony of the inhabitants of Tenorra. Tenorra is somewhat bigger than Earth, but with less landmass, and orbits an F5V class Star. It was colonized some centuries ago by Humans from Earth, and has gone through a short dark age since then.

The planets are under attack by the Ravagers, and it will be on you to fend them off.

During our internal playtests we've found that the readability of the game is lacking, to say the least. Players need a lot of information, and previously, we didn't display nearly enough of it. So here is how we're working on fixing that. 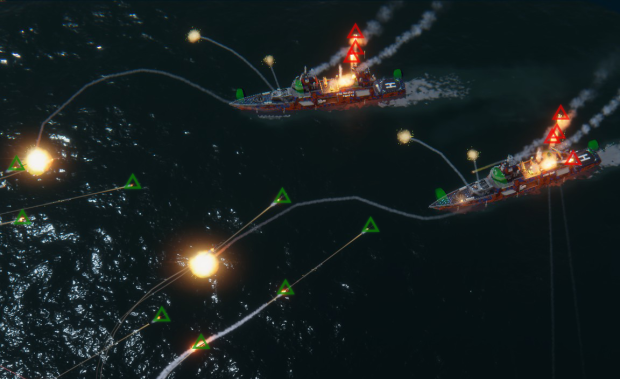 A lot of pretty symbols, essentially! The triangles in the picture above will most likely be on a toggle, or only visible while a missile is in the fog of war, but still in RADAR range. Note: There is a graphical glitch at the moment, with the water interaction bodies, the green blobs on the ships. When a ship was previously in the fog of war, they become visible.

The Missile icons would also mostly likely only appear on "attacking" missiles, not "defending" missiles, like the RAMs seen launched here.

As it is right now, ships have a view range, and that's it, either an enemy is seen or they aren't. I want to change that for a more detailed system, that takes sensor ranges into account, meaning RADAR and SONAR. Enemies that are detected by RADAR and SONAR outside of visual range appear as icons representing their size and class, but not what they are exactly. Any small ship would have the same icon, any capital ship, and building, and any vehicle, all would have the icon respective to their class. 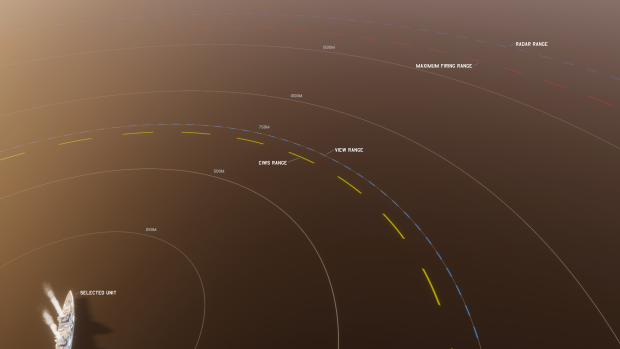 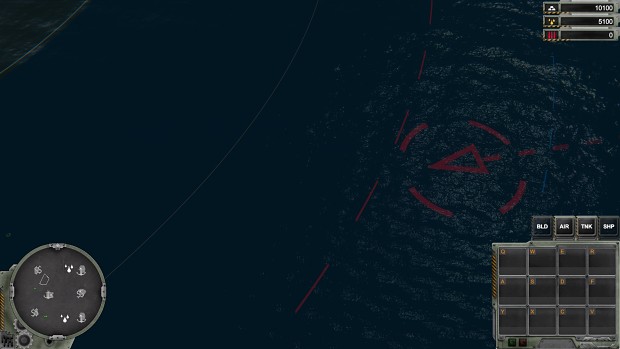 To further improve readability, and these are also toggleable, units get range circles for various properties. Maximum weapons range, CIWS range, view range, radar and sonar range, and a set of range markings for 250, 500, 750, 1000 and 1500 meters. Special areas of effect, such as repair and refueling areas, or the effective range of encapsulated torpedo mines, would all be displayed this way.

With the TDN especially it's often the case that you need to keep as far out of range as possible, and use your sensors and scouts to the max to win in an even fight against the other two. Conversely, with the Coalition you need to get as close as possible, to bring as many weapons to bear as possible. 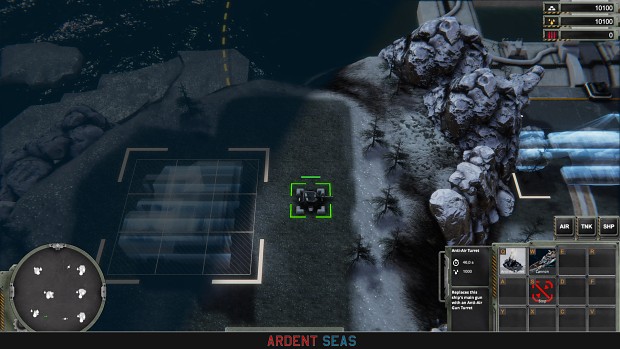 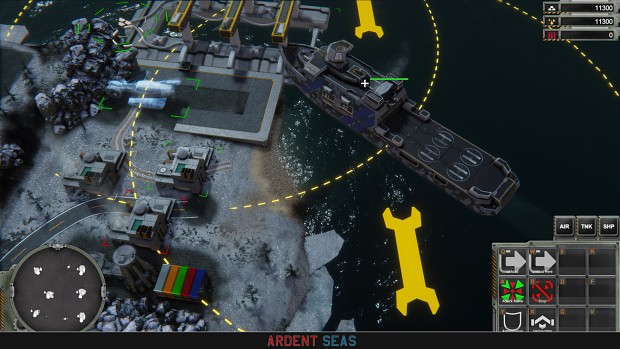 Bases and base building have been given some improvements too, as has the UI itself.

It is sometimes a bit difficult to glance what is landscape and what is player owned, and by which player. To make it easier, all buildings now have a bracket that corresponds to their footprint. It changes color based on allegiance. Like the future UI that will be used on units: Green means it's yours, red means it's an enemy, yellow means its an ally, and white or gray means it's unowned/neutral.

Static building slots are now represented by holograms, to clarify that there could be *a thing* there. Seen in the screenshots above are a mining robot, and a port authority building.

For consistency, Stop and Attack Move are always on the same spots in the UI, production options are at the bottom, and special abilities, like loading and unloading units, is placed at the top.

The Unit UI is as much a work in progress as most of the things mentioned here, but we do have concepts and mockups for them as well. We've shown those before, but for completeness sake, I'm including them here as well. 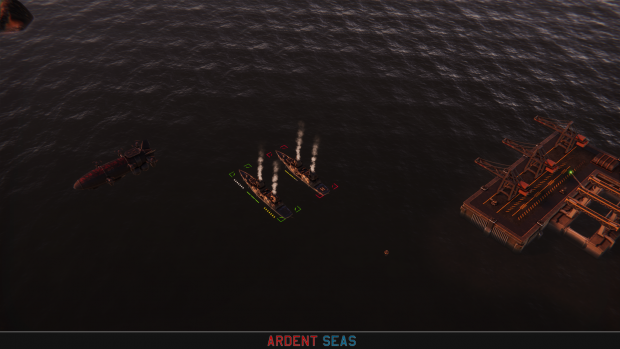 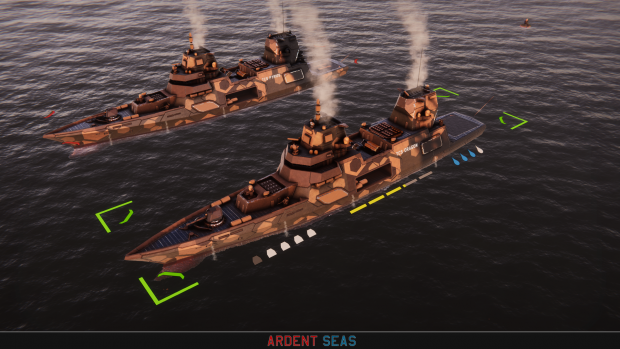 Behold, our (old) stuff! And with that I am signing out for the day. Remember to follow us on Twitter, Facebook, and to wishlist us on Steam!

Full steam ahead for Ardent Seas! As we continue preparing for the first public playtest, we've cleared another checkpoint: The Steam page is live.

We've stopped the kickstarter for now, we'll be re-launching soon.

I discovered this game by accident, however, I love every single thing I've witnessed of it so far. Keep up the good work!

makes me think of supreme commander or zero k honestly :) but thats ok both are great games infact some of my fav good work

Hello can i request Resistance and skynet function :D.coz i want to play like this.like Skyhunter, T1 like terminator 3 : rise of the mechine. Most people want to play.May be included that functions your games very attractive and porpoular sorry my english

If it was dead, I wouldn't have published a number of screenshots mere hours ago ;)

Is it possible for you to post more articles on here as updates and such because I found them really interesting?

Of course, but in due time. Right now there isn't much to write about.

first off this is a dream game and I love what you guys are doing and thank you. I'm sorry to ask this as I know its hard to answer but is there any chance of a beta this year. I'm just really excited to play a game like this

We can't confirm any kind of release date, but we do aim to get a public alpha out this year.

Also thank you too, it's always heartwarming and motivating to see people enjoying our work!