Apocalypse Dawn is a Zombie Survival MMORPG, the first featuring a storyline which leads you to change the fate of mankind. Its goal is to define a new level of gaming experience in the genre, featuring:

The game is not a gankbox, as the gameplay won’t be limited only to surviving and shooting to other players. Apocalypse Dawn will be developed with Unreal Engine 4 for PC (Windows), Mac, and Linux, with a custom server architecture to support a large number of players on the same map. If this campaign raises enough funds, we will also make an optimized port for PS4and Xbox One.

You will enjoy a breathtaking storyline with multiple paths and different endings, which will deeply involve you and will need your contribution to progress. The game will take place in a post-apocalyptic world, where the mankind has been obliterated. The only thing you know is that most of the lifeforms have been infected by an unknown foe, and now are threatening those whom were not. Six months earlier your peaceful life has been brutally smashed, you’ve lost your dears and friends, and now you’re doing your best to survive, wondering if you should look for allies or to be a lone survivor.

We can’t spoil too much of the plot, as it would waste a part of the gameplay, such as investigating on the past events to gather more information on the infection.

You can create your own character and customize its appearance and gender. There will be five available classes, each one with a 4-way talent tree, unique strengths and affinity with secondary skill. You will gain experience through many sources, like completing quests and killing enemies, and therefore new abilities. 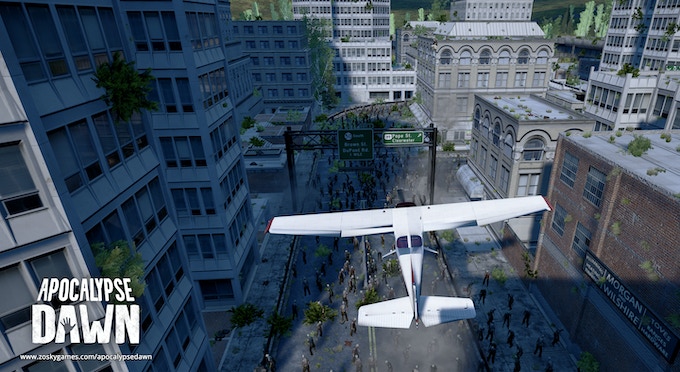 Once logged in you will be able to contribute to the story progression through many questlines, or just experience a lone survivor gameplay, as there will be also missions you can complete by yourself, without being forced to join a group. You will find three in-game factions, whose NPCs will ask for your help to reach their goals. Choosing one of these factions, and fighting for it, you will take your part in deciding which of the possible story paths and endings will be followed. The plot progression will be server-wide, and each time you login you will receive an update on the current state.

The game is designed to encourage a strong interaction between players, both cooperating or fighting each other, creating your own clan, or joining an existing one, and therefore gaining control over certain amount of zones of the map eligible to be a clan base, where you can rest, meet your friends and store resources and vehicles. You can of course control more than one at once as your clan grows up, which implies that your clan can raid others base and conquer it. The bigger is your clan, the strongest your faction will be as long as you fight for it, reaching its goals and changing the storyline progression. 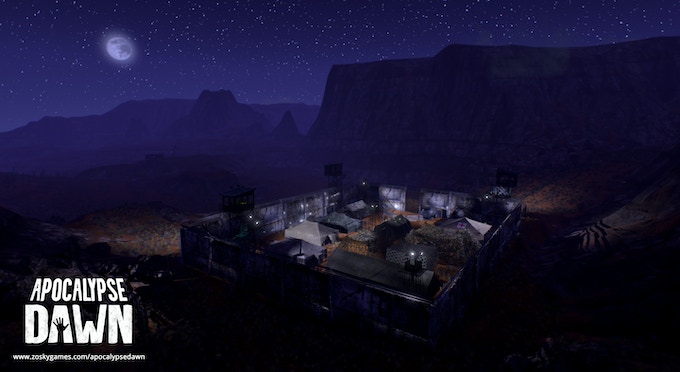 Guild base in the desert 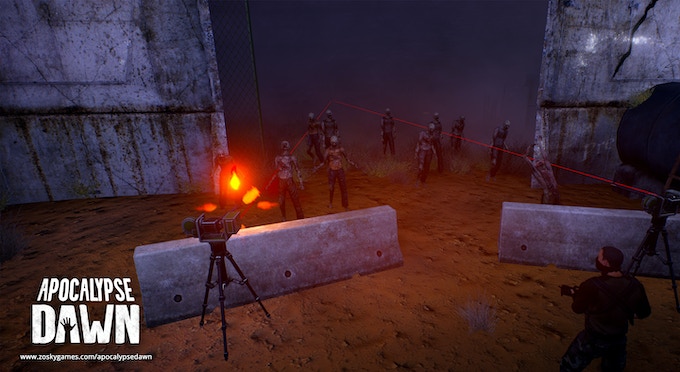 Defense system for a guild base

Crafting
We’ve designed a great crafting system, that can be used to create, repair, modify and improve weapons, armors and buildings, including your clan base. Most complex crafts requires you to find the related blueprint, and to have the right proficiency for it. Each class will have bonuses for different types of crafts, for example the Engineer can create advanced defence systems for your base and useful tech gadgets. 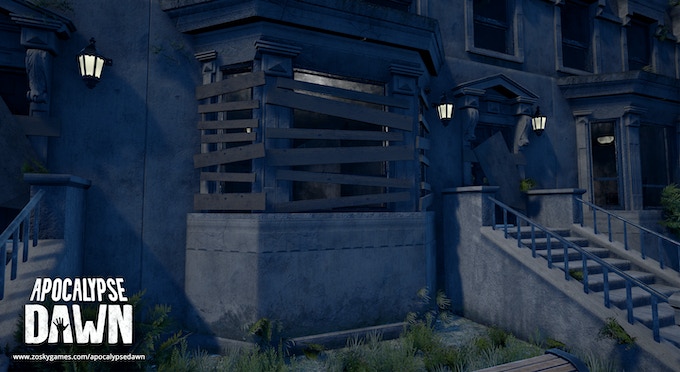 There will be a lot of different types of enemies, especially in urban areas, and we decided to offer a real survival challenge which relies also on the "quality" of the enemies that will threat you, rather than just on the quantity. You will need to deal with more evolute zombies, which are smarter, faster (sometimes more than you), and far more lethal. They will have their own hierarchy, additional abilities like hiding, climbing and setup traps, and will have an advanced AI which will make them able not only to see you, but also to hear you, hunt for you and look for footprints you may have left behind. 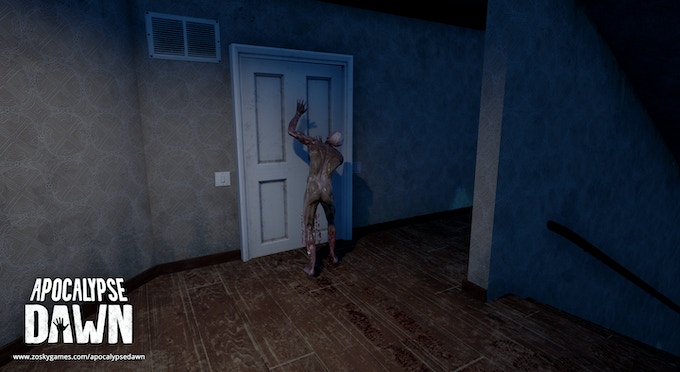 Interaction with the environment

Exploring the environment won't be limited to story progression: Apocalypse Dawn will let you entirely explore both open world and urban areas and enjoy an amazing environment interaction. For example you will be able to craft or to use an existing object to reinforce a door which would otherwise fall against an enemy assault. Anyway there won't be only advantages from these mechanics: depending on where you are you could leave footprints behind you, which can be detected by players and enemies.

Pushing bookshelf to reinforce the door

During character creation, you will be able to choose your character’s class. The class is the important choice that will define all the various bonuses, Skills and the initial appearance of your character. 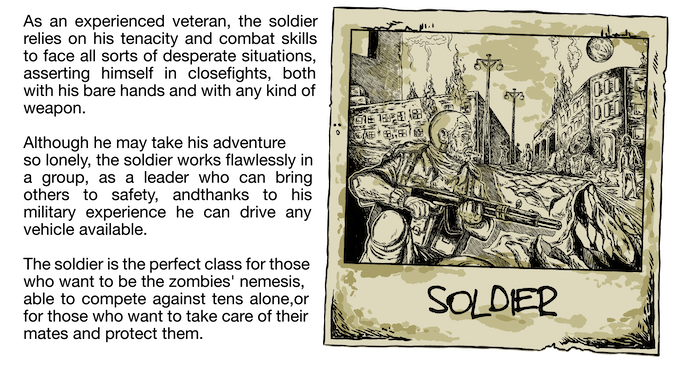 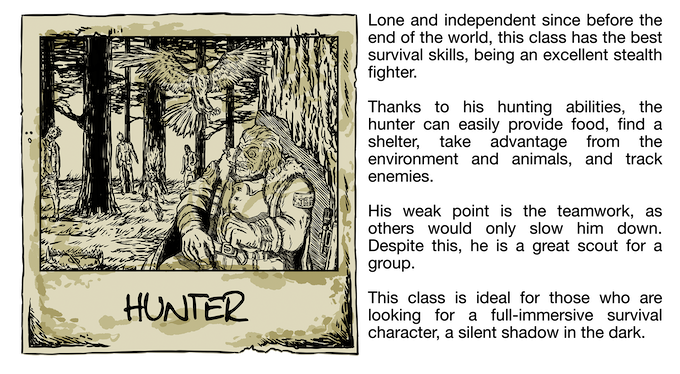 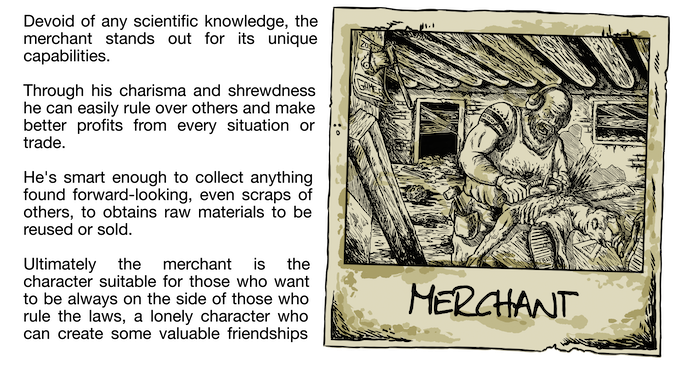 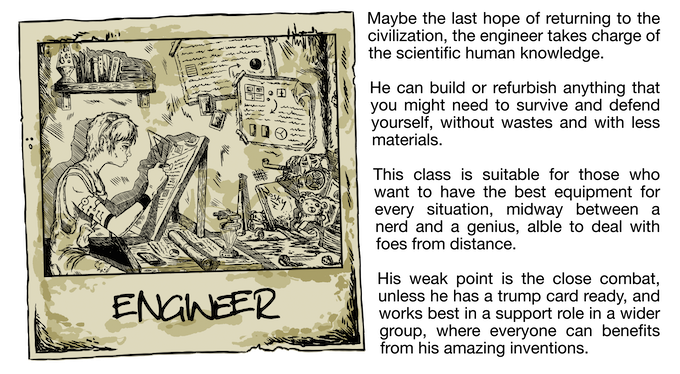 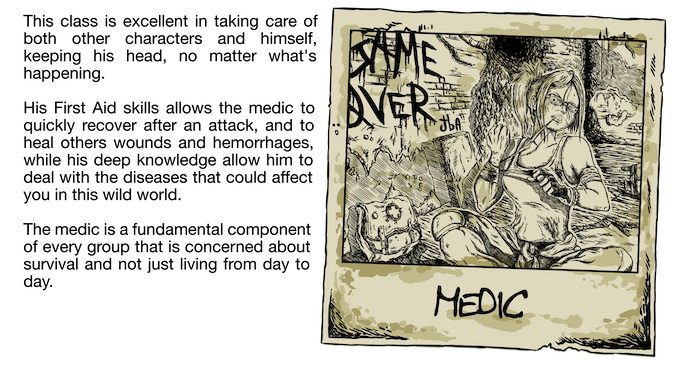 During the gameplay you will find three different in-game factions, each one with its unique quest-lines and goals. Here there is a small brief on them.

Apocalypse Dawn comes from the idea of a small group of professional developers with many years of experience in the software and IT industry, and with a strong passion for gaming. We are disappointed by the current Survival MMO games, which are just a multitude of gankboxes with a few trivial differences, and we believe that the players of the Survival Online genre deserve much more than this, so we decided to start this project. We have involved game designers, story designers and experienced players in order to offer a gaming experience the most complete and compelling as possible, while listening to the community thoughts through our Facebook and Discord channels.

The first step of our development plan is the expansion of the team. We are aware of the vastness of the project and the challenge it represents. At the moment we already have some interested investors, but it is important to show that people are interested in this project too. We need the help of the community to ensure the completion of the development. As Zosky Games, we are a newborn indie company, so we expect some mistrust against us, especially because in the past other young indies used Kickstarter to raise some easy money for kicking out an eternal early-access alpha game. We’re not going to follow this trend. This project is a risk for us, as we have to expose ourselves and leave our jobs to work on it fulltime. We truly believe in this dream, and we are putting all our passion and determination in it, spending countless hours also during the night in the past months. We have the technology and the skills to do it, so we are asking for your help to make it possible, hoping that you won’t make us pay for the mistakes of others.

To promote Apocalypse Dawn and grow its popularity (top games), use the embed code provided on your homepage, blog, forums and elsewhere you desire. Or try our widget.

Hi there, your game looks really amazing in grafic and concept!! Something new that i would/hope to play someday. Hope because, like a linux user, i'm accustomed to be disappointed, disregard from, actualy, too many games dev. Is'nt an accuse to you (do'nt know you) it,s just for say if you are not really sure to bring this game to linux OS just do'nt write it down, wait after windows release please. Figure it out such a pain it's for me see game so promising like yours and will read someday "sorry but we delete the linux version project"
Sorry for that but i had to told it!! So good job!! Hope to be a tester soon :)

Form a samurai clan with your friends, build a village, craft gear, farm the land, keep livestock, survive and wage war against others!

Last Oasis is a Nomadic Survival MMO. Earth has stopped rotating, and the last human survivors need to outrun the scorching Sun in a massive Open World.Walkers...

Age of Aincrad is an action-based MMORPG game inspired by the popular anime series Sword Art Online. Made for you, by a team of passionate developers...

Come. Journey in a world of endless expanses, labyrinths littered with challenge, treasure, and unrelenting foes. Take on quests that will test you and...

Doggo Estates is a multiplayer third-person action game in which a dog has everything he needs to become a real estate mogul: his warm liquid gold! Compete...