We will have a booth at this year's POSSCON for Alien Arena, I will be speaking on thursday the 24th, and also conducting a 2 hour workshop on the 25th. In other news, Alien Arena has been released on Desura.

COR Entertainment will have a booth at this year's POSSCON for Alien Arena. This excellent event is growing each year and should be even better than ever. I was invited to speak as well, and will be conducting a 45 minute session on open source gaming on March 24th, and a 2 hour workshop the following day that will be more detailed and talk about some of the rendering techniques used in Alien Arena and other games.

I've been working on our booth setup, and have all of the necessary hardware up and running. Here is what we have, on my kitchen table. Luckily the booth table is a foot wider, because it's pretty cramped fitting two massive Alienware towers and 27 and 22 inch flatscreens on it. 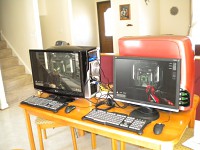 In other news, Alien Arena is finally on Desura! It's been a long time coming, and we are very happy to be on this very excellent game medium.

On the development front, there should be a new map in the SVN repos very soon, one that has actually been about a year in the making! It began life as a remake of our Dm-zorn, but has turned into a somewhat of a monster. Work continues on the new GUI, and quite a few new and revamped maps are planned for a summer release.

Great Game... my class plays it each quarter when we learn about networking and video